The Duchess of Sussex, 41, arrived at the London cathedral on Wednesday, September 14, alongside Sophie, Countess of Wessex. As their car pulled up to Westminster Hall, she joined Sophie, 57, Queen Consort Camilla and Princess Kate to greet the late queen’s casket. The Suits alum, who married the queen’s grandson Prince Harry in May 2018, even curtsied to Her Majesty’s coffin as it was carried in by members of the British troops. 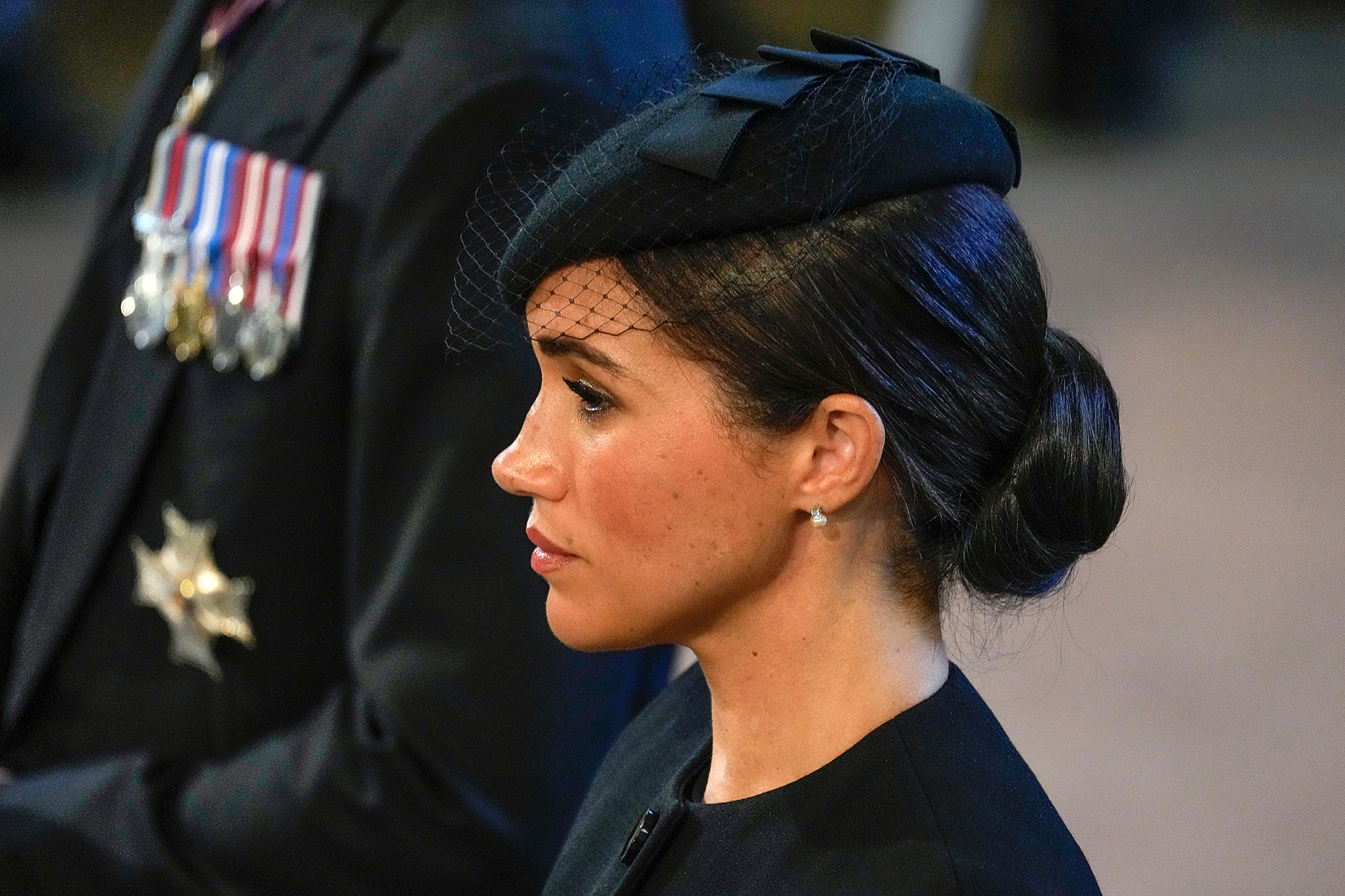 For the somber occasion, Meghan paired a black dress with a matching fascinator. The California native wore her hair in a sleek bun with her hat — and its attached veil — on top. Meghan’s look was completed with a pair of subtle pearl earrings that had previously been gifted from the queen. (Us Weekly previously confirmed in October 2018 that the late regent had gifted Meghan the pair of diamond and pearl drop earrings before her first solo public appearance.)

While the four women arrived via car on Wednesday, their respective spouses — King Charles III, Prince Edward, Harry and Prince William — marched on foot from Buckingham Palace to the chapel, behind the queen’s casket. The Prince of Wales, 40, walked side-by-side with the Duke of Sussex, 37, for the nearly one-mile somber stroll. Princess Anne and Prince Andrew also joined the processional.

Once everyone had arrived at Westminster Hall, the Archbishop of Canterbury presided over a 20-minute service, in which Meghan stood beside Harry. Following its conclusion, the couple exited hand-in-hand.

Meghan — who shares son Archie, 3, and daughter Lilibet, 15 months, with Harry — had traveled to England earlier this month for a series of public engagements with her husband. After the queen’s death, the pair remained abroad during the country’s mourning period.

The Intricacies of Tiara-Lending in Queen Elizabeth II’s Court

Buckingham Palace announced on Thursday, September 8, that Her Majesty had died at the age of 96.

“In celebrating the life of my grandmother, Her Majesty The Queen — and in mourning her loss — we are all reminded of the guiding compass she was to so many in her commitment to service and duty. She was globally admired and respected,” the BetterUp CIO wrote in a Monday, September 12, statement. “Her unwavering grace and dignity remained true throughout her life and now her everlasting legacy.”

Harry continued at the time: “Granny, while this final parting brings us great sadness, I am forever grateful for all of our first meetings — from my earliest childhood memories with you, to meeting you for the first time as my commander in chief, to the first moment you met my darling wife and hugged your beloved great-grandchildren. I cherish these times shared with you, and the many other special moments in between. You are already sorely missed, not just by us, but by the world over. And as it comes to first meetings, we now honor my father in his new role as King Charles III.”