Memorabilia celebrating the life of King Charles goes up for sale

King Charles memorabilia is ALREADY on sale: eBay sellers cash in by flogging royal memorabilia for the new monarch – including £3.99 badges, £3 fridge magnets and £16.99 t-shirts

King Charles III may have only been in reign for 24 hours – but memorabilia celebrating his life is already appearing online by excited royal fans.

Mugs, Union flag and fridge magnets, as well as key rings and t-shirts bearing the new monarch’s face are up for sale on sites like eBay and Etsy today.

The former Prince of Wales became King Charles when his mother, the Queen, died yesterday at the age of 96 at Balmoral.

One user is selling a King Charles III – Jumbo Fridge Magnet Souvenir, which features a portrait of the new monarch and the words of the national anthem ‘God Save the King.’ 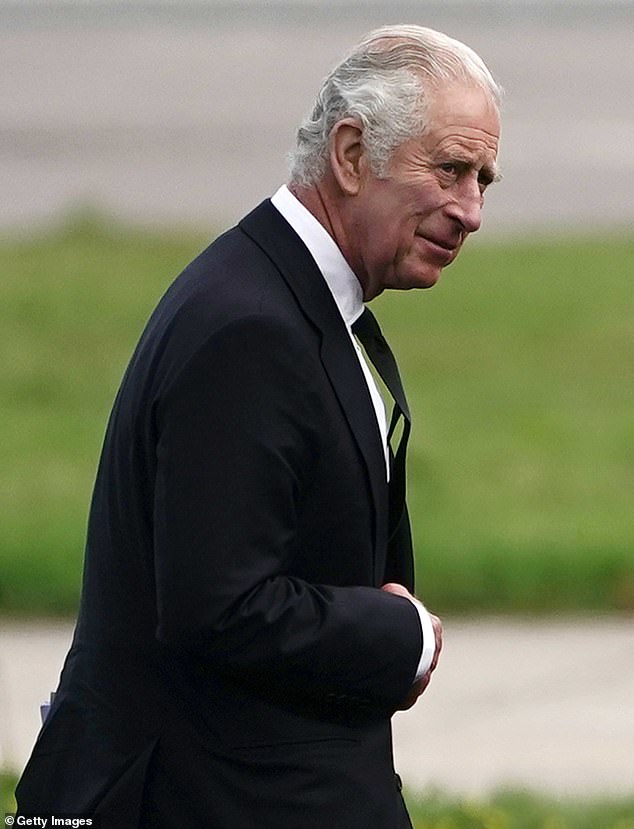 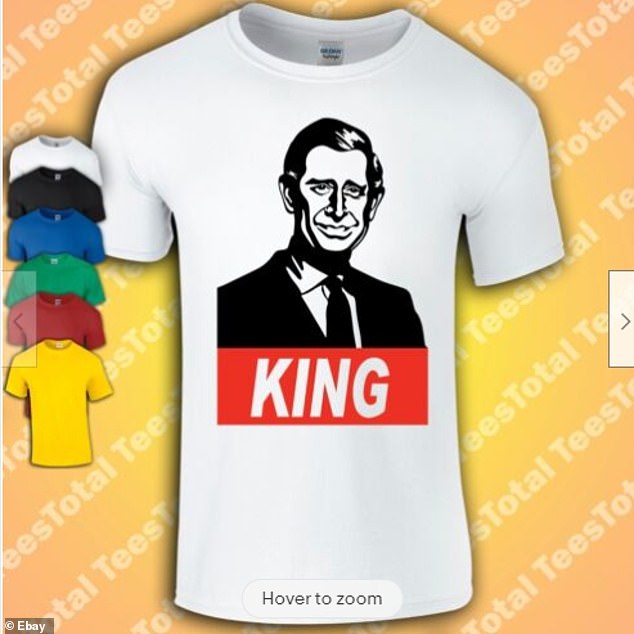 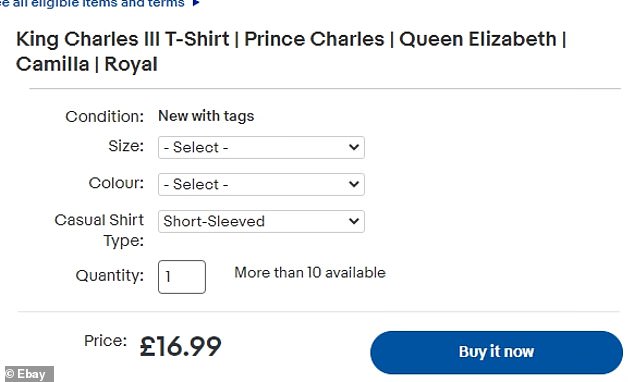 One eBay seller is already flogging a £16.99 t-shirt bearing the new King’s portrait in black and white as well as the word: ‘King’

A King Charles III accession badge is being sold for £3.99, featuring a photo of the King and the words: ‘Long to reign over us, God save the King.’

Meanwhile a mug bearing the King’s portrait and the words: ‘To celebrate the reign of King Charles, 2022’ is being sold for £8.99.

‘Vintage style bunting’ featuring King Charles’ face and the Union flag is also for sale on the site for £6.99.

It is described as ‘selecting the new King.’ 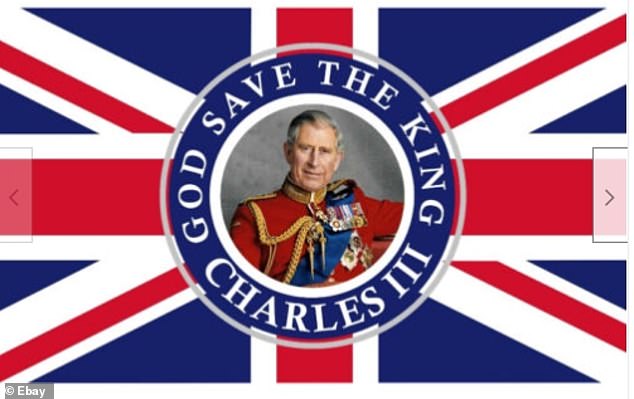 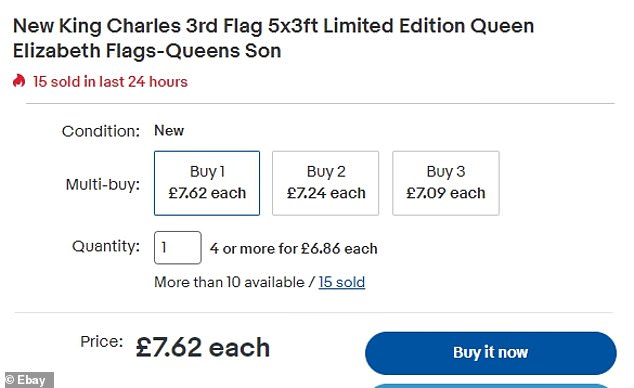 Meanwhile another seller on eBay is selling a large Union flag with a portrait of the new King in the centre for £7.62 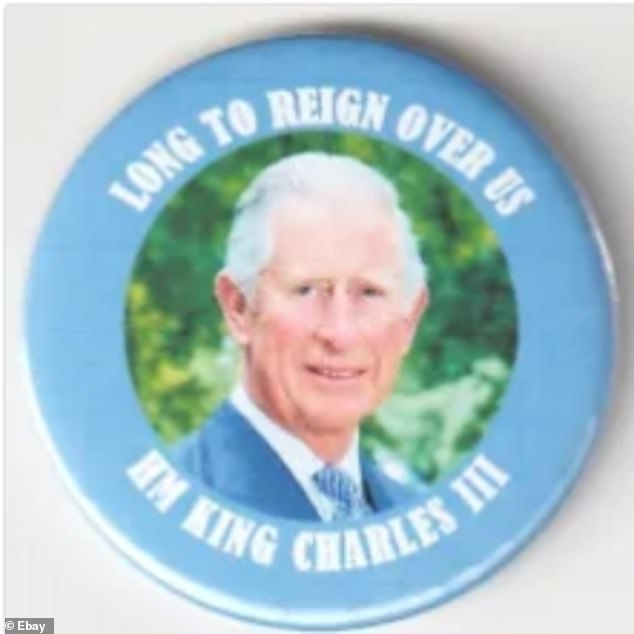 The sale of the items comes as King Charles III and his Queen Consort Camilla were greeted by thousands of well-wishers gathered outside Buckingham Palace today as he met his subjects for the first time as monarch.

Huge crowds cheered the couple as they arrived at the palace before the King left his state Bentley and began shaking hands with members of the public, many of whom shouted ‘God Save the King’.

In emotional scenes, an impromptu rendition of the National Anthem broke out as the Royal Standard was raised above Buckingham Palace for the first time of his reign.

Police had moved the crowds back from the main entrance of Buckingham Palace at around 1.30pm in anticipation of the King’s visit, with officers creating a 30ft pathway between the crowds and the bouquets of flowers. 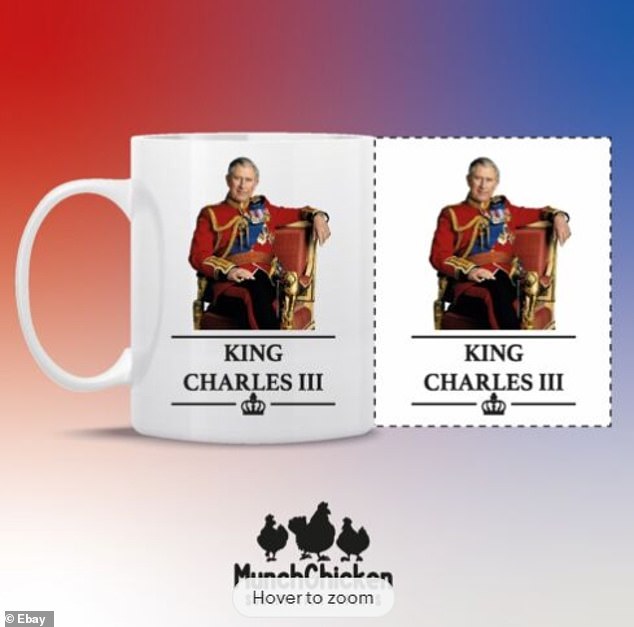 Meanwhile others are selling mugs online featuring the new King’s portrait for £8.99 to royal fans 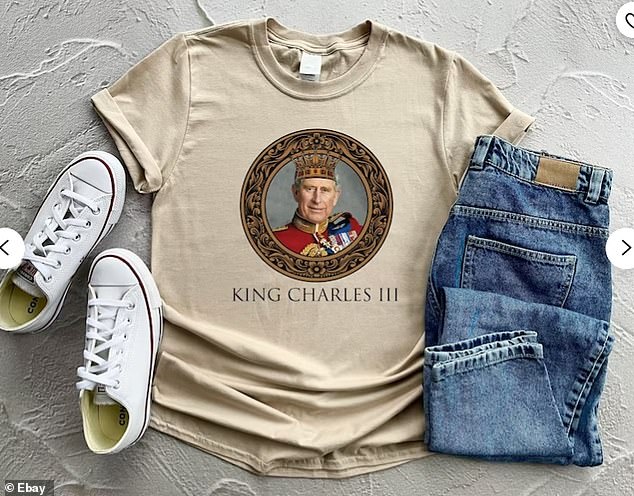 Other royal fans can pick up t-shirts with a mocked up portrait of King Charles wearing a golden crown on etsy for £11.13

Charles and his wife Camilla landed at RAF Northolt just after 1.30pm after leaving Balmoral, where they had stayed overnight after racing up to be at the late Queen’s bedside.

The King will meet Prime Minister Liz Truss this afternoon, before making a televised speech to the nation at 6pm.

Charles has already turned his hand to his duties as monarch despite his grief. He gave the order that a period of ‘Royal Mourning’ for the Queen will be observed from now until seven days after her funeral. 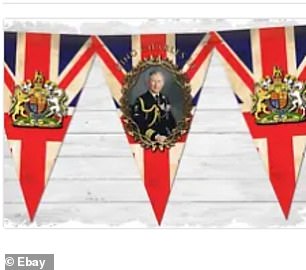 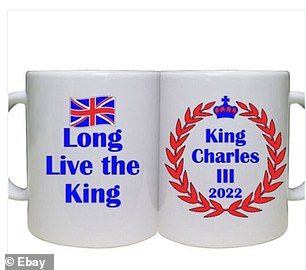 Meanwhile bunting featuring the new King’s portrait is for sale online for £6.99 (left), while royal fans can also pick up a mug with the words ‘Long live the King’ for £9.50 (right)

Meanwhile, Buckingham Palace said today that the King will be proclaimed at the Accession Council at 10am on Saturday in the State Apartments of St James’s Palace. It will be televised for the first time in history.

Members of the royal family had made the urgent dash to be with the frail monarch as her health failed yesterday.

Prince William – now using the title of the Duke of Cornwall and Cambridge – left Balmoral just before 1pm and is travelling back to Windsor to be with his family ahead of the Accession Council, Kensington Palace said.

Princess Anne, Prince Andrew, Prince Edward and his wife Sophie, the Countess of Wessex, still remain at the estate.