Middle review: A depressing look at marital life in Essex 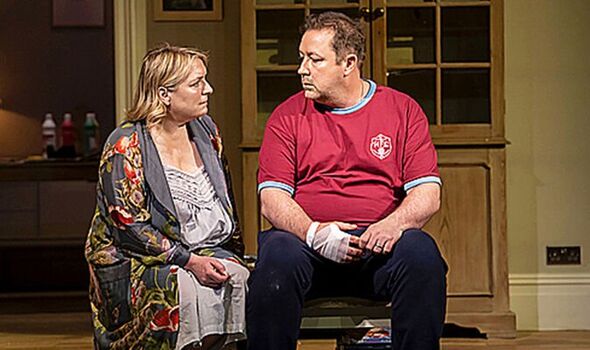 The subsequent 100 minutes consist of them unpacking their issues, concerns and problems in naturalistic and interminable detail. Romford-born writer David Eldridge’s earlier play, Beginnings – about two people at the start of a relationship – followed a similar formula. Gary has to work harder than ever to maintain a lifestyle that includes a six-bedroom house with only three people in it.

Thwarted by late motherhood, Maggie regrets her loss of freedom and yearns for a partner with whom she can communicate on a level higher than how a pork joint should be cooked for an impending dinner with the in-laws.

While the clichés that people employ occasionally tickle the funny bone, the overall effect is numbingly depressing.

The suggestion that their condition is an indirect result of Margaret Thatcher’s deregulation allowing the likes of Gary to compete with City posh boys and make loadsamoney is allusive but too opaque to register.

Class conflict, social mobility and cultural aspirations are all woven into the play without resulting in anything like real drama in spite of superb performances from Rushbrook and Ryan.

One crockery smashing incident aside, it is a duologue between two people foiled by their own misaligned ambitions that struck me as not just boring but patronising.

I didn’t care for it at all.