Health officials are keeping a watch on coronavirus cases in Latin America and eastern Europe but the government is downplaying the likelihood of the tougher travel restrictions placed on India being expanded to other countries.

However, Prime Minister Scott Morrison says as the pandemic continues to rage around the world, it’s unlikely this will be the last time leaders have to restrict travel. 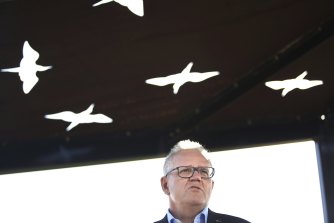 Prime Minister Scott Morrison says with the pandemic continuing to rage, flight restrictions on India will probably not be the last Australia puts in place.Credit:James Alcock

National cabinet on Thursday decided to reduce the number of direct flights coming from India to Sydney and the Northern Territory by 30 per cent and require people travelling from India through third countries to have a negative coronavirus test. The exemptions for people to leave Australia to visit India are also being restricted.

Mr Morrison said the decision, made on medical advice, was prompted in part by the proportion of coronavirus cases among people in quarantine having arrived from India growing from 10 per cent to 40 per cent.

The idea is to minimise travel in and out of the growing hotspots.

At the moment there are about 34,000 Australians overseas registered as wanting to return. The largest cohort, about 9000, is in India, where a massive new wave of coronavirus cases is swamping hospitals.

Some 4000 people have left Australia headed to India over the past month for reasons such as attending family weddings.

The country has had more than 16 million cases in total, with 332,730 new cases recorded on Friday, the world’s highest daily tally. That figure is likely to be an underestimate as the nation’s testing labs are overwhelmed.

India has also been added to the UK’s “red list” of countries from which travel is banned. Also on the list is the Philippines, where there is the fourth largest group of Australians stuck overseas.

However, government sources played down the likelihood of travel restrictions being extended to the Philippines.

Mr Morrison said leaders had agreed to take action if there were other countries where specific risks needed to be managed.

“The pandemic is raging around the world and I don’t expect this to be the last time when we have to make such a decision,” he said.

Health Minister Greg Hunt said the medical advice was constantly being adjusted in response to changing conditions around the world to keep Australia an “island sanctuary”.

“You can see that there are parts of Latin America or eastern Europe that have had very large numbers of cases and if they’re growing and if we think that the community transmission is just at the level that even those very competent national authorities may not be able to detect, then we’ll make decisions, as we’ve done with India,” he told 4BC radio.

The Australian Health Protection Principals Committee, which includes the chief health officers from each state, determines risks based in part on the numbers of travellers arriving with COVID-19 infections.

after, More, on, regions, Wa, Watch
You may also like: