The federal government will announce a series of measures to protect Australia from the new “Omicron” strain of COVID-19 that has emerged in South Africa a variant of concern.

Europe, Britain and a host of other countries closed their borders to non-residents arriving from countries including South Africa, Botswana, Eswatini, Lesotho, Mozambique, Namibia, South Africa and Zimbabwe on Friday, London time, due to the emergence of the variant. 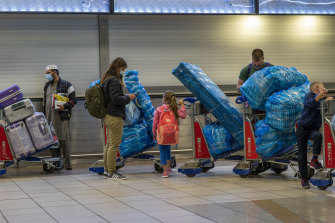 People line up to get on an overseas flight at the International Airport in Johannesburg.Credit:AP

There are no direct flights between South Africa and Australia at present, but a series of other precautionary measures are likely be announced later on Saturday.

As part of those measures Australians who have been in southern Africa and are headed home will likely face a period of time in quarantine or isolation.

UNSW epidemiologist Mary-Louise McLaws said there was evidence that the new Omicron strain had been found in people in Israel, Botswana, Hong Kong, Malawi and Belgium.

“Although the numbers are low, if this strain has been allocated as a variant of concern, then one of the determinations apart from lab-based, with 32 changes to the spike protein, must have come from a determination that there is more transmissibility,” she said.

“It hasn’t evaded diagnostic tests, there is no evidence it is evading treatment and no evidence it is more deadly, so I would suggest it [the classification as a variant of concern] would be based on infectivity. This is very concerning because Delta was already 60 per cent more infectious that Alpha.”

“It’s not just in South Africa any more. They [the federal government] need to learn the lessons from Delta. Our quarantine system has failed on numerous occasions, the system’s failure of one person has been a lesson in how infectious Delta has been, those lessons need to be well taken, if they don’t the group of people in Australia that haven’t been fully vaccinated will suffer.

“We saw one person who the system failed to ensure was vaccinated, to ensure was tested regularly, has now resulted in over 172,000 cases in Australia.

“We have about 69 per cent vaccine coverage of the total population. For 12 plus it’s about 84 per cent, that’s great but it’s not enough to protect us from the introduction of a highly infectious variant.”

Nancy Baxter, an epidemiologist and head of Melbourne University’s School of Population and Global Health, said that Australia needed to close its borders to travellers from southern African nations.

“Although this is currently classified as a ‘variant of concern’ because we are not sure about the risk, there is mounting evidence in South Africa of rapid transmission, and because of the many mutations in the spike protein there is theoretical risk that the Omicron variant will be able to evade immunity (from both vaccination and infection) more than previous variants,” she said.

“That is a potentially extremely dangerous combination. Until we know more we need to adopt the precautionary principle and do what we can to keep this new variant out.”

The WHO’s Technical Advisory Group overnight said Omicron had a large number of mutations that made it concerning, and that preliminary evidence suggested “an increased risk of reinfection” compared to the other variants of concern, including Alpha, Beta, Gamma and Delta.

“The number of cases of this variant appears to be increasing in almost all provinces in South Africa,” the group said in a statement.

“This variant has been detected at faster rates than previous surges in infection, suggesting that this variant may have a growth advantage.”

The WHO has asked countries to step up their surveillance and genomic sequencing and report all cases and clusters.

The White House also imposed a travel ban and extended it to include Malawi.

There have been no cases of Omicron detected in Britain, but one found in Belgium. Belgium’s Health Minister Frank Vandenbroucke told a news conference that the case had been found four days ago in an unvaccinated woman with flu-like symptoms who had travelled from Egypt via Turkey.

None of her household contacts had developed symptoms but were being tested.

“It is a suspicious variant. We do not know if it is a very dangerous variant,” Vandenbroucke said.

The first case of the infection, previously called B.1.1.529, was detected in South Africa on November 9.

Britain moved ahead of the WHO’s declaration, announcing on Thursday night (local time) that it was closing its borders to South Africa and five other countries on Friday, causing chaos at airports.

Health Secretary Sajid Javid said there were “early indications that suggest it may be more transmissible and vaccines less effective”.

“We are concerned that this new variant may pose substantial risk to public health. The variant has an unusually large number of mutations,” Javid told the Commons.