Prime Minister Scott Morrison has ended weeks of speculation and confirmed he will attend the United Nations climate summit in Glasgow next month. 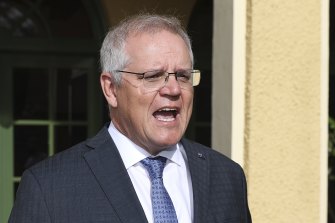 Mr Morrison said on Friday he was looking forward to attending the important event.

“The government will be finalising its position to take to the summit. We’re working through those issues with our and colleagues and I look forward to those discussions over the next couple of weeks,” he said.

The COP26 summit kicks off on November 1, the day after the conclusion of a meeting of G20 nations in Rome, which Mr Morrison will also attend.

The federal government is under pressure to increase Australia’s commitments to cut greenhouse emissions and many MPs expect Mr Morrison’s attendance will hinge on securing agreement with the Nationals to commit Australia to a deadline of achieving net zero emissions by 2050.

Mr Morrison described net zero by 2050 as an important environmental goal and said the discussions he was having with his colleagues were about a policy to ensure that Australia’s regions are strong and regional jobs were protected.

The Prime Minister said last month he would not attend Glasgow to be at home and prioritise domestic concerns, including the lifting of COVID restrictions.

“Australia will be opening up around that time. There will be a lot of issues to manage and I have to manage those competing demands,” Mr Morrison said at the time.

The NSW government on Friday announced hotel and home quarantine would no longer be required for fully vaccinated people entering NSW, including those coming from overseas, from November 1.

Mr Morrison said NSW had confirmed 210 unvaccinated people would be allowed in each week and he had asked other states to confirm what their weekly caps on unvaccinated travellers would be.

He stressed it would not be open slather for everyone in the world to come to Australia, saying the Commonwealth would stick to its plan of allowing travel only by Australian residents and their families at first.

“We are not opening up to everyone coming back to Australia at the moment. I want to be clear about that,” he said.

“In the first instance, it will be for Australian residents and their families. We will see how that goes and then we will be to [look at] other priorities set out as being skilled migration as well as students to Australia and then we will move on to the challenge of dealing with international visitors to Australia.”

The federal national security committee tweaked the rules earlier this week to classify overseas parents of Australians as “immediate family”, meaning they will qualify for travel exemptions under the restrictions. This comes after a long community campaign for the change.

attend, climate, MORRISON, to, UN
You may also like: