Prime Minister Scott Morrison’s attendance at major global climate talks is likely to hinge on whether he can get the Nationals to agree to support net zero emissions by 2050, as key allies and Liberals in inner city seats put pressure on him to deliver more ambitious climate action.

The Nationals are split on net zero and internal pressure is also rising from Liberals facing uphill battles to hang on to inner-city seats where independents are attacking the federal government’s record on climate change. 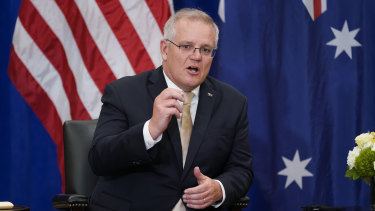 Prime Minister Scott Morrison signaled Australia’s ambition for greater climate action at the Quadrilateral Security Dialogue between the US, India, Japan and Australia on Saturday. Credit:AP

Mr Morrison said on Monday that he had not decided if he would head to Glasgow for the United Nations COP26 summit in November because domestic matters may demand his presence.

“Australia will be opening up around that time, there will be a lot of issues to manage and I have to manage those competing demands,” he told the West Australian.

Federal Liberal party director Andrew Hirst sent emails to members over the weekend calling for a fighting fund to protect under-fire MPs such as Tim Wilson, Josh Frydenberg and Katie Allen in Melbourne as well as Dave Sharma, Jason Falinski and Trent Zimmerman in Sydney.

The email promoted the government’s record on renewable energy and emissions reduction and said “Labor, the Greens and left-leaning independents are more interested in playing politics and symbolism than getting results”.

Mr Morrison has signalled his hopes of committing to decarbonise the economy by 2050, but he needs the junior Coalition partner to endorse the move before it can become an official pledge ahead of COP26.

Nationals leader Barnaby Joyce has not committed to signing up to the target. Former leader Michael McCormack has flagged he wants Australia to do a deal on net zero, but Resources Minister Keith Pitt is opposed to it.

If the Nationals refuse to endorse a more ambitious climate commitment, Mr Morrison could avoid criticism at the summit and leave it Energy and Emissions Reduction Minister Angus Taylor, who has confirmed he will attend the summit, to represent Australia.

Mr Morrison signed a joint communique released on Saturday by members of the Quadrilateral Security Dialogue – the US, India, Japan and Australia – that said the nations “intend to update or communicate ambitious NDCs (Nationally Determined Contributions) by COP26 .” NDCs are a country’s greenhouse gas emissions reduction pledge through the UN.

Australia’s former top climate diplomat, Howard Bamsey, said while net zero by 2050 is the bare minimum expected of the federal government, it could be enough to avoid a stinging rebuke on the international stage. He said securing a deal could pave the way for the Prime Minister to attend the event with other world leaders including Boris Johnson and Joe Biden.

“He’ll only go if he’s got essentially good news. He is not going to be pilloried by others,” Mr Bamsey said. “But if they can get the net zero commitment, then I think there’s plenty of cover for Australia.”

Mr Bamsey said net zero by 2050 is “seen as an especially low bar for us, and not getting there would have consequences”.

However, Australia could leverage a net zero commitment for significant diplomatic gains at Glasgow, by detailing plans under its the federal government’s Technology Roadmap, which invests public funds to drive industry uptake by developing cheaper low emissions technology like soil carbon, green steel and hydrogen.

“There’s a lot of other opportunities for them, that more or less zero cost that they could, they could advance at COP26,” Mr Bamsey said.

“I’m sure they’ve got a few things ready to come yet and those things will look much better if there’s the net zero commitment behind them, much more credible. So I could see Australia doing reasonably well.”

cl, Glasgow, Morrisons, to, visit
You may also like: