Mother-of-nine reveals she spends $1.1k every month to feed her family

Mother, 29, who is expecting her 10th baby reveals she spends $1,100 every month to feed her super-sized family and ‘wants to have as many children as possible’

A mother-of-nine who is currently expecting her 10th child has revealed she spends $1,150 on food for her family every month and ‘wants to have as many children as possible’.

Amanda Sellers, 29, from Roanoke, Virginia, explained how her husband Chris, 33, wasn’t sold on her dream of having a super-sized family when they first started dating in January 2013.

But three months into their whirlwind relationship, Chris – who was already a father-of-two at the time – proposed to Amanda and the happy couple tied the knot that July.

The pair began trying for a baby almost immediately and welcomed their eldest son Liam, now eight, in February 2014.

As well as welcoming Chris’ two boys into their home, Amanda went on to have twin girls, Mya and Mia, now seven, in May 2015 and twin boys, Asher and Brycen, now five, in January 2017.

As part of Amanda’s plans to ‘have as many children as possible’, the couple welcomed Eli, three, in November 2018, and Emma, now two, in July 2020. 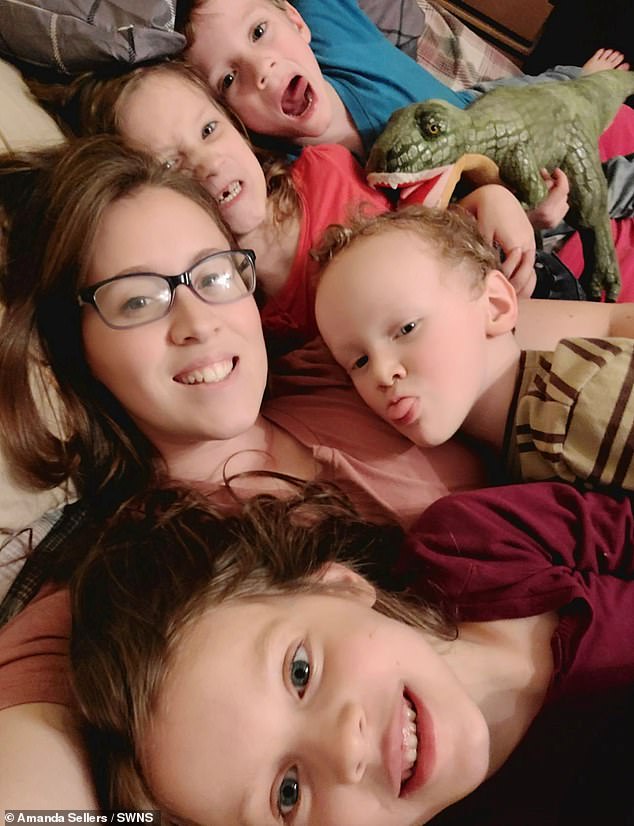 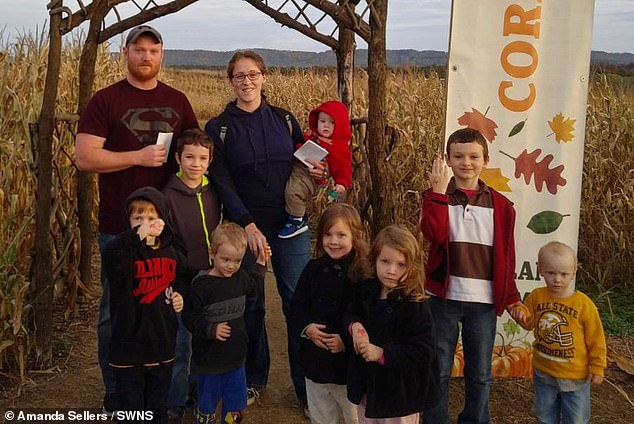 Amanda says her husband Chris, 33, (left) originally wasn’t sure about having lots of children but came round to her way of thinking when their first son Liam was born in February 2014. L to R: Chris, Amanda, Logan, Ryan, Liam, Mya, Mia, Asher, Brycen, Eli 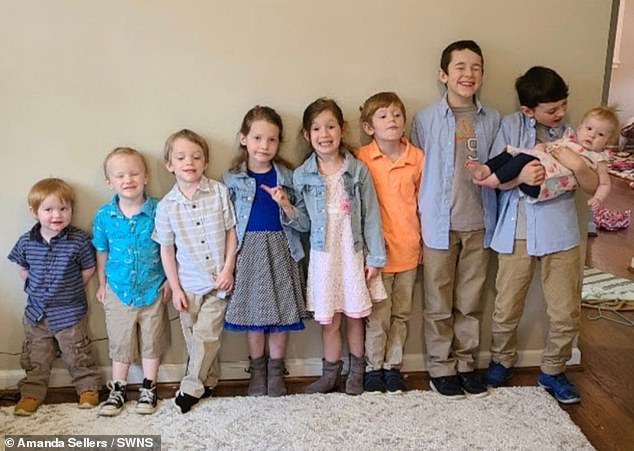 Amanda and Chris have decided to educate their brood from their home in Roanoke, Virginia. L to R: Logan, Ryan, Liam, Mya, Mia, Asher, Brycen, Eli, Emma pictured in 2021

They are now expecting their tenth baby – due in January 2023.

What’s more, the parents have decided to take sole charge of their children’s education by home-schooling them and had to buy a 15-seater van to cart their family – including Chris’ two sons from a previous relationship- around

In order to make their money go further, the stay-at-home mother plans out each and every meal they have for the month and then does one big $800 shop. 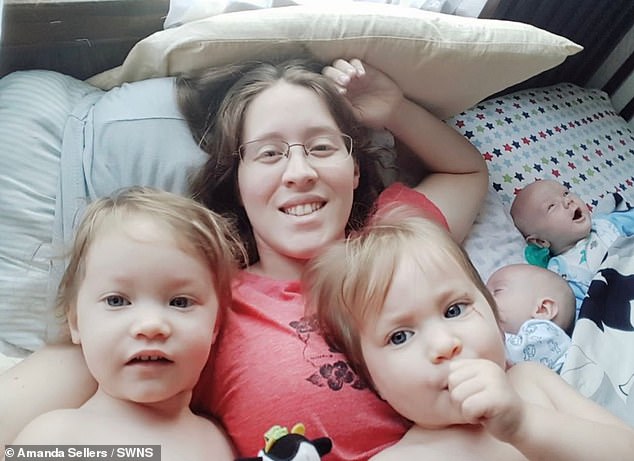 The mother-of-nine spends $1130 to feed her super-sized family every month. Amanda Sellers with her two sets of twins Mia and Mya and Asher and Brycen. 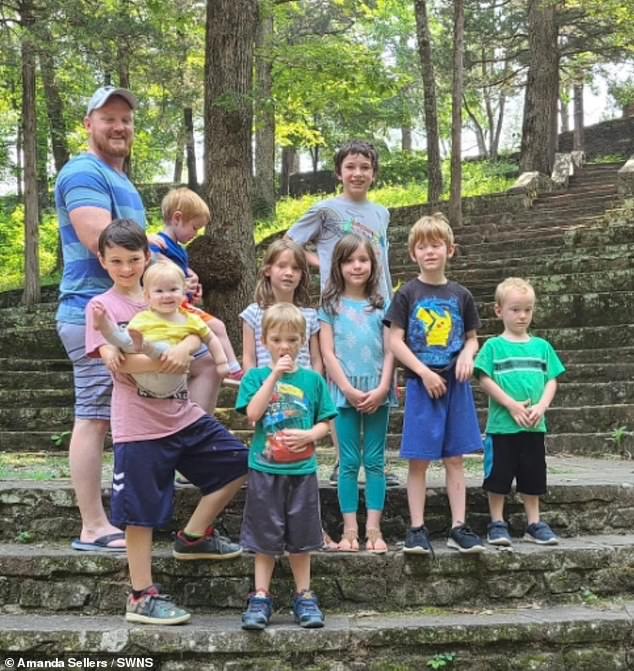 The mother said their household can be ‘chaotic at times’. Chris, Logan, Ryan, Liam, Mya, Mia, Asher, Brycen, Eli, and Emma pictured on a family outing

She will then spend a further $300 to top up on fresh items – such as milk and yoghurt – each week.

Amanda explained: ‘I plan about 15 dinners and then double them. I don’t plan out the exact days we have the meals but I make sure we have enough.

Shortly after Amanda had her first baby back in February 2014, Chris’ sons Logan, 12, and Ryan, 11, moved into their three-bedroom house.

‘Having the three young kids is much harder than having 10 children in my eyes.

‘They all get along and are very outgoing. I try and teach them all to be independent so they can help out with chores and be able to sort their own breakfast and lunch.

‘Most of them know how to put the wash on, or make a peanut butter sandwich,’ she said. I set a 10 minute timer most days to get them to all tidy up.

‘It can be chaotic at times but so can any household.’ 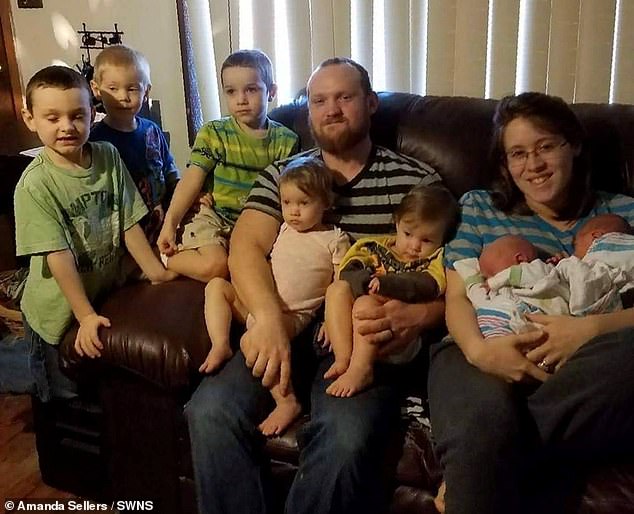 In order to help with the upkeep of the house, Amanda and Chris’ older children are given chores which are adapted up on a weekly basis.

Explaining how home-schooling works in their household, the mother continued: ‘They all get on with their work and then once a day I’ll check what they have been doing with each of them.’

This Christmas, Amanda and Chris have set themselves a present budget of $450 – meaning they’ll spend $50 on each child.

However, the couple said they want their children to value spending time together as a family over material items.

The mum added: ‘I’m very happy with our family size. 10 is a great number. We think this might be our last baby but we’re keeping an open mind for more.’

Chris added: ‘I was apprehensive at first of having a big family but now I wouldn’t change it for the world.

‘If you’d have told me then that I’d have nine children and one on the way I would have said you were crazy.

‘We’re trying to build a healthy bond with the kids. I don’t think we could ever have too many children that we wouldn’t have time or love for.’