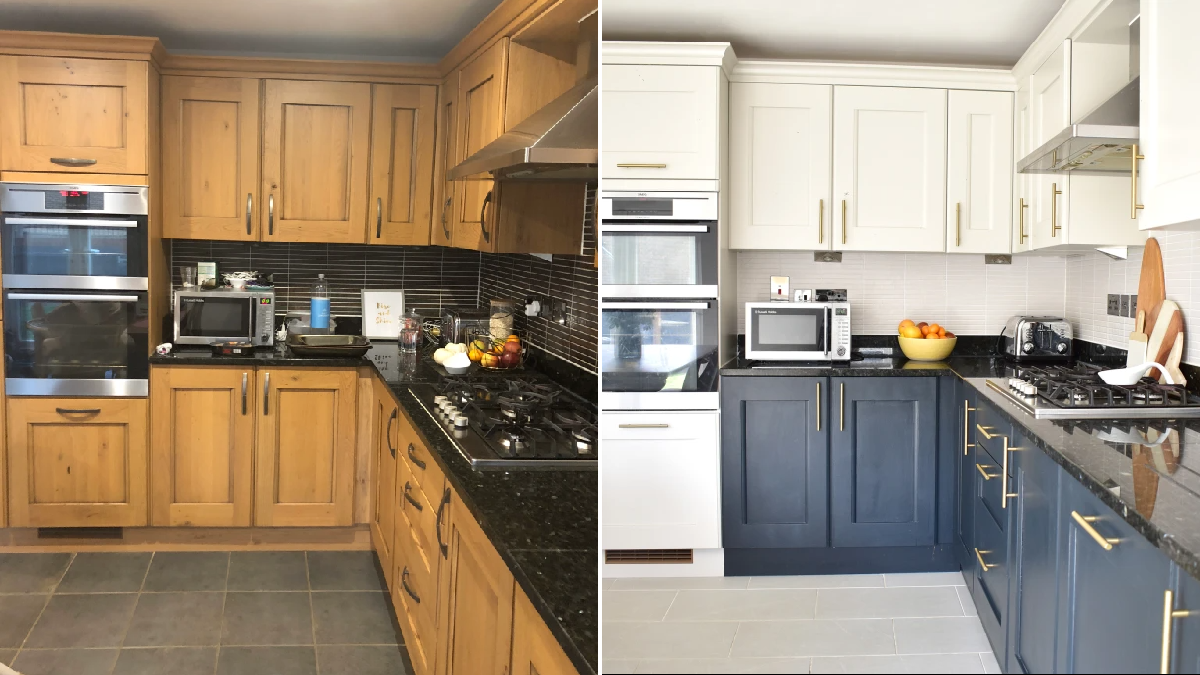 When graphic designer Danielle Parisi moved into her Buckinghamshire home six years ago, she knew the kitchen – along with various other rooms – needed a new lease of life.

But the mum-of-two, who has always had an eye for interior design, decided to go about the kitchen project herself.

Danielle, who runs Três Paper Co, said: ‘When we moved in we loved the space – but not the colour scheme and the style of the kitchen as it was. We were met with dark colours on the cupboards, floor, tiles and needed to add some light into it to make it feel ours.

‘We liked the layout though, and the units were in good shape, so it would be a waste to dispose of them – and I always try to upcycle before replacing something, to save resources and support sustainability.’

After looking on Pinterest and Instagram for inspiration, she decided to start by prepping and then painting the cupboards.

Danielle did this by removing all the doors and numbering them on the inside, to make it easier when she put them back on. Then, she removed all hardware from the surfaces to be painted and ordered new brass handles for the cupboard doors.

After, she used sugar soap to clean every surface to be painted.

‘If your units and doors have any imperfections, this is the time to fix them. Our doors had knots so we used a wood filler to make the surfaces flat and smooth,’ she explains.

‘Sand the doors and units down. You don’t need to remove all of the top layer of treatment, but make sure it is rough enough to allow the paint to adhere to the surface. Some people actually skip this step but we decided to do it just in case.

‘Making sure that the doors are on a flat surface to prevent the paint from running down, then start with the primer.’

Danielle used Zinsser primer and three layers of Farrow & Ball Estate Eggshell paint – as well as Cornforth White on the top units and Railings on the bottom units.

She also allowed enough time for the paint to set, and lightly sanded imperfections in-between coats for the perfect finish.

Next on the list was to paint the wall tiles – something the mum-of-two was initially unsure of doing, but is now glad she did.

She continues: ‘This was the biggest gamble for us as I had never used tile paint before and was not too sure of the results, but my thought was that if they didn’t look good after being painted then we could replace them.

‘It was worth a shot though, and it was the best decision I made.

‘I love the tiles so much that I would’ve chosen the exact same colour in new ones if we had replaced them, plus the colour works really well with the cupboards, and the paint is still intact even in the most hard working areas such as around the cooker and sink.’

1. ‘Clean all the surfaces to be painted at least twice, use sugar soap wipes to remove all the grease. Repeat this as many times as needed especially around the cooker, and don’t ignore the grout lines, they also need to be degreased for a perfect finish.

2. ‘You can apply frog tape around cupboards and wall plugs if you prefer at this stage. Use one coat of primer on all the surfaces to be covered.

3. ‘We used three coats of paint, mainly because we were painting dark tiles in a light shade, otherwise two may have been enough. It is best to use a small foam roller and keep the coats thin to ensure the results last.

4. ‘Sand down any paint that may have run down in between coats. Once happy with the paint, we used a white grout pen to go over all the grout lines. This was time-consuming because of the style of the tiles but the result is amazing.’

After the cupboards and wall tiles were done, the biggest job left was replacing the floor tiles.

Danielle says: ‘My husband ripped the old tiles and prepared the floor for the new tiles, and within a week we had them installed. Changing from dark to light flooring made the kitchen look so much bigger. ‘

In total, the DIY kitchen renovation cost £1,365 – with £505 for the tiles and £860 for other materials and the labour of one additional floor tiler.

The couple spent just over three months completing the project – as Danielle was juggling two young children, as well as her full-time job, along with the renovation.

She adds: ‘It took us three months to complete the cupboards including plinths, however that was mainly because I was doing it in my spare time between a full-time job and a baby and a toddler.

‘The wall tiles were a lot quicker taking me around four days, mainly due to allowing the time for the coats to fully dry before applying new ones. The floor tiling took about a week from removing and preparing to adding all the finishings.’

But this is something Danielle would advise other people considering a DIY kitchen renovation to do, too.

The graphic designer adds: ‘Take your time, a rushed job won’t last, it is worth it taking the time to make sure you get a great finish.

‘And finally, don’t put pressure on yourself: we had the mindset that if it didn’t work or it didn’t look good, we would then consider replacing it.

‘It turns out we absolutely loved it and it fits our family life for a fraction of the cost of a new kitchen.’