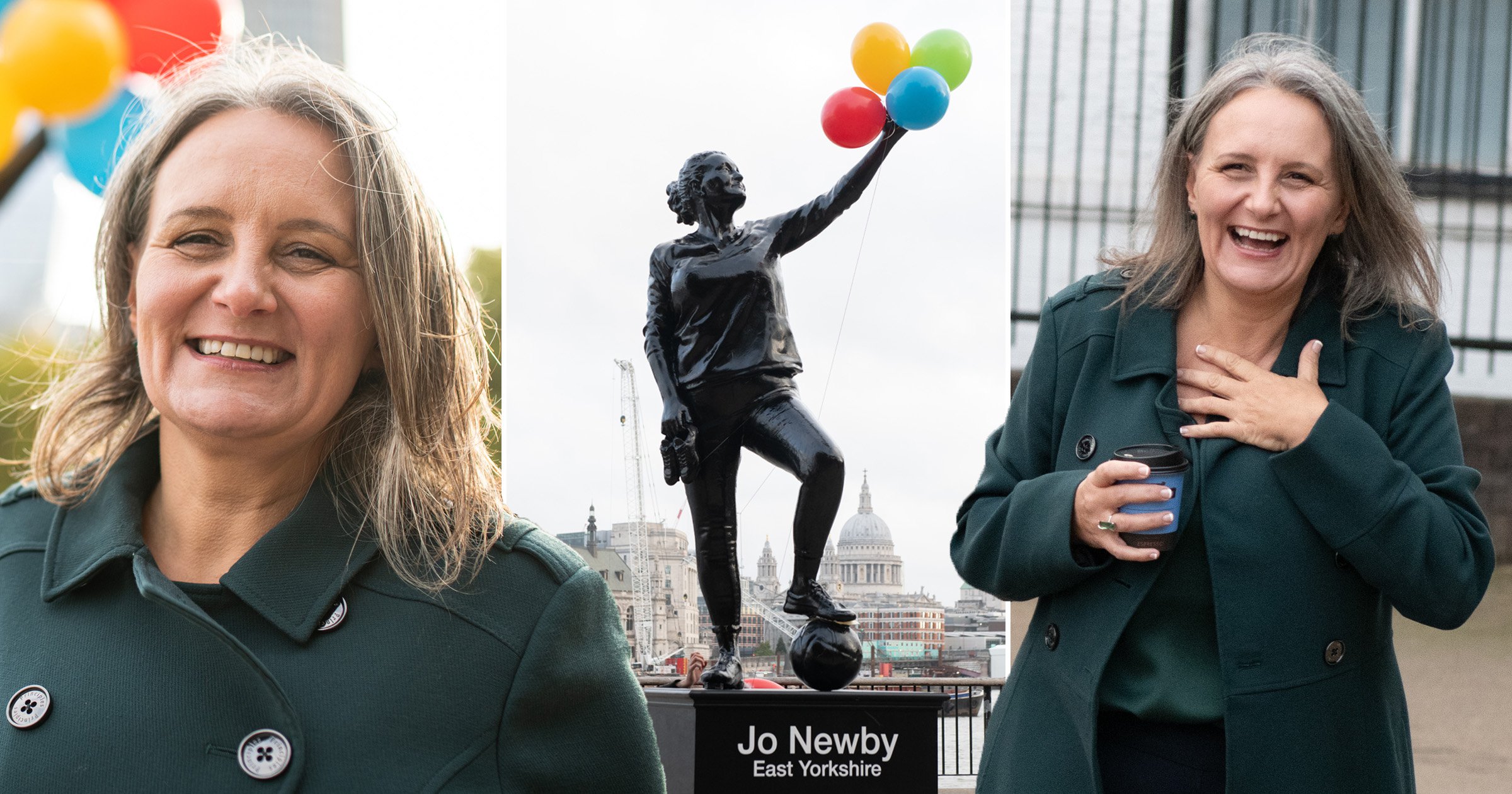 A statue has been unveiled in London’s South Bank to commemorate Jo Newby, a selfless woman that’s fostered 92 children over a period of 18 years.

The 52-year-old from East Yorkshire, says what she does is nothing that special, and doesn’t realise how inspiring her actions are.

Speaking to Metro.co.uk, she says: ‘Fostering was something I’d always wanted to do.

‘I’d always been around children. ‘I’d babysit for people and family and I was always on hand to help with children.

‘I started work as a nursery nurse, then became a nanny, and the local children would always gravitate towards my house.

‘My son would always bring friends home. I’d volunteered at my son’s school, and when he reached his 30s, my husband and I decided we wanted to foster children that weren’t as fortunate as him.

‘We had space in our house and in our hearts, so we thought fostering was something we wanted to try.’

Initially Jo and her husband planned to try fostering for five years, then reassess.

Of the children who have stayed with her, the length of time they stay varies – it can be anything from a day to five or six years.

‘We do short-term fostering, but that can still involve years of care.

‘We felt where we could work the best was in emergencies and situations that involve stepping in quickly.’

That can mean fostering a child within two hours.

Jo often gets emergency calls late at night when someone needs somewhere to say.

‘I don’t often say no to placements,’ she says. ‘If we have room and they’ll fit with the other children, we’ll take them.’

At most, she’s had seven children under her roof at one time.

‘It takes a real art to make someone feel welcome when you know very little about them and they know nothing about you.’

Given she’s fostered as many as 92 children – and counting – Jo remembers them all, and is very sentimental about the experience, considering them family.

She says, with tears in her eyes: ‘I remember every single one of them. Each child takes a little part of you away with them.

‘You invest in loving and caring for them, you can’t not lose a little bit of you when they leave.

‘I don’t keep tons of memorabilia, because you’d have loads, but I have a photo album that’s got my favourite picture of each person in it.

‘In the bathroom, we have an eclectic wall with signed wooden hearts on the walls.

‘I don’t need a physical reminder though, because I have stories of every one of them.’

When it’s time for a child to go, it’s a complex emotional process for Jo.

She says: ‘It’s got to be a positive thing, because you’ve got to convey the message to that child or young person that this is a good thing.

‘You can tell them you’ll miss them, but you can’t show you’re too sad.

‘We celebrate the time we had the positives we all got out of it.

‘As soon as they’re pulling off the drive, we cry and it gets you.

‘Sometimes I just know I need a day or some time to process the emotion.’

Jo always tells the children she’s always there for them, and often children will visit and return to her in some way – years after they’ve left her home. She even still supports some of them.

One of those children, Kasper, Jo later legally adopted and nursed through a brain injury coma.

‘I believe every child deserves permanence and Kasper was considered ‘not a candidate for adoption’,’ Jo says.

Until the statue of Jo was unveiled, she never considered her impact on all of this children – and how she’s made their lives better.

‘It took my breath away,’ says Jo of her new statue. ‘I’m just a normal housewife doing the same as thousands of other foster carers in the country.

‘I hope it shows ordinary people can have an impact.’

Crowned ‘#MyKINDHero’ by KIND snacks, after being nominated for the acknowledgement by her husband, Chris, her statue shows her holding 92 balloons – each representing one child she’s fostered.

She’d always believed the children she looked after would prefer to not look back on their time in foster care, but recently saw one of her previous visitors, who said ‘she values the input I’ve had in her life’.

‘You always think that you want to influence a young person, but because fostering can be seen so negatively, you’d think care leavers would want to put it behind him, so you never consider whether they remember you,’ she explains.

‘Nothing can take the place of a healthy upbringing with your birthparents – nothing can quite match that – but if that’s not possible, the next best thing is to live with people who care for you and value you.’

She also believes fostering can have a bad reputation given the misconceptions around the financing of it. Foster parents are given money to help provide for the child, and sometimes it’s not enough to cover a child’s care.

Despite this, what motivates Jo to keep going is the children themselves and providing them a safe home.

‘We haven’t fostered a lot in my view,’ she says shockingly, ‘I have a close friend who’s been doing the job for 30 years and has fostered over 300.

‘I’ll do this so long as I’m physically able.’

It also involves being organised to a ‘military level’ and teaching the children life skills to help with house chores where appropriate.

On top of all this, she also co-founded Barton Inclusive Football Club Hull, a football club for pan-disability children.

She did this after realising there were no competitive teams in her region that catered to the community.

Supporting children and improving their life experience has always been a priority for her.

‘That’s what drives me – childhood should be positive and you should have the opportunities, and that’s what I help to make possible for the children I care for,’ she says.

‘Every child should meet their dreams and potential, and if I can have a little hand in helping them get there, that’s it.’

Jo’s advice for those considering fostering

Jo Newby has been named the #MyKindHero following the nationwide search by KIND Snacks to uncover the UK’s Kind Hero. The commemorative statue is designed to inspire Brits to follow Jo’s lead and commit more acts of kindness – in its bid to build a kinder world.