Follow
Home » Lifestyle » My kitchen EXPLODED when the Queen came to visit!

My kitchen EXPLODED when the Queen came to visit! Magical memories of ordinary people’s meetings with the monarch are recounted in two new radio shows

There are some things you never expect to see the Queen doing. Running, for instance.

Or displaying a ladder in her tights (it’s widely known that her lady-in-waiting always carries a spare pair, just in case). Imagine seeing both of those things at the same time then.

This was the (most unusual) experience writer Vivien Noakes had when she was assisting her artist husband Michael at Buckingham Palace as he completed a portrait of Her Majesty. ‘One day, halfway through a sitting, the Queen discovered she had ripped her tights,’ she begins.

‘She was having lunch with someone at 1pm and Michael said, “Does that mean you’ll have to curtail the sitting?” She said, “No, it doesn’t matter as long as I hurry.” 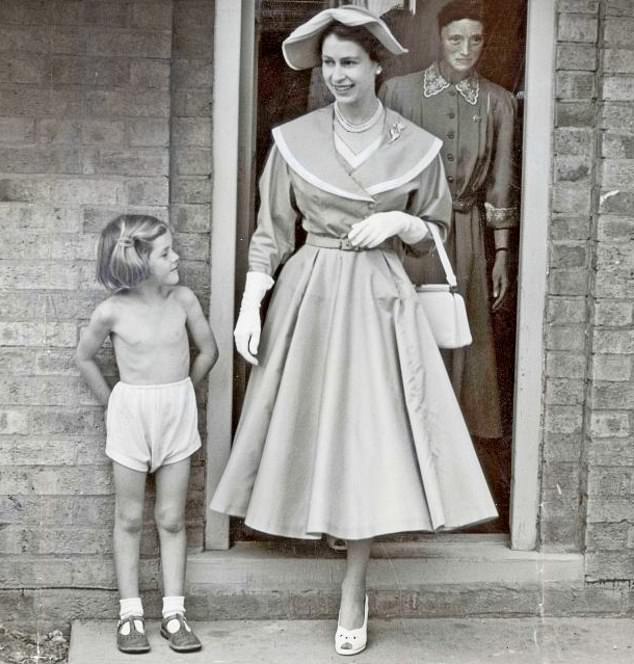 Mrs Ben Adams had the very rare honour of having the Queen visit her at home. This was in 1952 – before the Coronation – when Her Majesty was visiting a new housing estate in Hemel Hempstead. Pictured, the Queen leaving the Adams’s home

After the sitting, as Vivien was waiting in the corridor to help dismantle the props and the lights, she heard the Queen say a ‘very formal goodbye’ to Michael. Then Her Majesty ‘turned around and began to run.

‘So I had this lovely image of her running the entire length of Buckingham Palace, down a corridor that runs behind the State Rooms, with the corgis barking behind her.’

Vivien died in 2011, but her memories are included in a rather lovely BBC Radio 4 programme called Encounters With Elizabeth, which features people who have met the Queen – and have quite a tale to tell about the experience.

The show, presented by royal expert Robert Lacey, is in turn funny, touching and illuminating, showcasing the unique relationship the Queen has with her subjects and highlighting what the show’s producer Simon Elmes describes as her ‘very human’ sense of humour and comic timing.

Around 40 ‘encounters’ are retold, some in entirely new interviews, but the real gems have come via a laborious trawl through the BBC archives. There lie such treasures as an old interview from the 70s with a former Lady Mayoress, named as Maisie Woodward, who had lunch with the Queen and witnessed a waitress so overcome with nerves she dropped a pot of coffee over the table.

‘The Queen was entirely unfazed,’ laughs Simon. ‘She said, ‘It doesn’t matter. It’s fine.’ Her priority was making sure the poor girl was OK.’

That same Lady Mayoress had another ‘pinch me’ moment when her royal guest whipped out her lipstick and applied it at the table. ‘We had gone to quite a bit of bother to have the powder room carpeted and borrowed a mirror to put on the wall, a full-length mirror,’ explains Mrs Woodward in another clip.

‘But to my pleasure she took out her powder and touched her nose up and put a bit of lipstick on at the table!’

Another utter treasure is a 1977 interview with a woman described only as Mrs Ben Adams, who had the very rare honour of having the Queen visit her at home. This was in 1952 – before the Coronation – when Her Majesty was visiting a new housing estate in Hemel Hempstead.

It was supposed to be a ‘no fuss’ visit. ‘We were told not to do anything special, that she wanted to come into a normal household and see how an ordinary family lived,’ Mrs Adams explains.

Of course, who wouldn’t don the Marigolds and start cleaning furiously, told that the Queen was coming to visit? Mrs Adams duly did, but she made the mistake of setting her tin of furniture polish on the hot plate of her new electric stove – and disaster ensued. 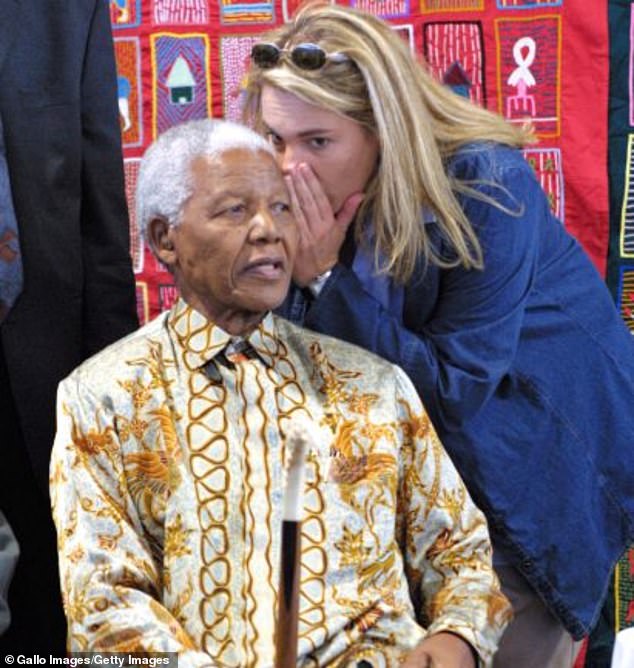 Nelson Mandela’s former private secretary, Zelda la Grange, pictured, describes her first meeting with Her Majesty. She tells how she was horrified when Mandela strode towards Her Majesty, a huge smile on his face, and declared, ‘Oh Elizabeth, you’ve lost weight!’

‘I very kindly set fire to the kitchen,’ she recounts. ‘The baby cried, so I went to the baby and… bang! I thought we’d been shot to pieces! The polish exploded. It was just like an atom bomb on the ceiling.’

Panic ensued, and the family cobbled together what paint they could. ‘It was a duck egg blue, and when the Queen came and admired my duck egg blue kitchen I felt like telling her the whole kaboosh. She said she liked the colour of my kitchen!’

This programme does feel like a little behind-the-scenes glimpse into a life known for its duty and formality. It’s one of the new interviewees – Admiral Lord West, former First Sea Lord – who refers to Her Majesty’s ‘impish’ sense of humour.

The former naval chief, who had a working relationship with the Queen, describes a wry exchange at the launch of the Golden Jubilee celebrations in 2002 in Portsmouth, where HMS Victory is in dry dock. He helped her settle in place for a 64-gun salute.

The Queen’s former press secretary Michael Shea describes a Python-esque incident that had Her Majesty in stitches. ‘The one thing the Queen never does in life is to arrive early for anything, because she knows people won’t be ready for her,’ he reveals.

‘We went to a Maundy service at a cathedral in the West Country and for some reason we arrived a few minutes early. As she was about to get out of the car we could see a line of bishops running.

‘They were carrying their crooks, and they had all picked up their gilded vestments above their knees. It was like something out of Monty Python as they ran from the cathedral to the greeting place.

‘The Queen collapsed in fits of giggles and I was instructed to stand between her and the cameras until she composed herself.’ 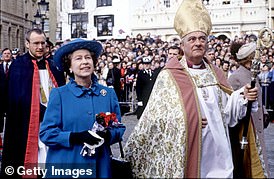 Luckily it was OK, but it was so lovely. She didn’t say, ‘I am not going to sit here with you firing all those guns!’

A particularly touching exchange is relayed in an interview with a Betty Goodge, who met the Queen in 1953 after her house had been flooded, and they were ‘cleaning all the mud’.

She describes the Queen holding the hand of her baby, who was 12 weeks old at the time and ‘had been born on the same day as Prince Charles’. To Mrs Goodge, the Queen was ‘just a natural mother’.

Not that Her Majesty doesn’t have her sharp side. Royal author Ingrid Seward cites ‘a famous occasion when, at a Privy Council meeting in the days of Tony Blair’s government, somebody had failed to switch off their phone and they rummaged in their pockets to switch it off.

‘The Queen said, ‘Oh dear, I hope it wasn’t somebody important.’

Presenter Robert Lacey also references a delicious moment when a guest decided to tell the Queen he’d heard she was a good mimic. She was ‘slightly taken aback and a sort of frozen look comes over her, but he doesn’t notice.

‘And he says, ‘I bet you could mimic my accent by this time tomorrow.’ She looks at him in that rather cold way, and says, ‘This time tomorrow? If you keep on talking I will have perfected it by dinner.’

Interestingly, Encounters With Elizabeth isn’t the only radio show that examines what it’s like to meet the Queen. Another show, this one on the BBC World Service and called The Day I Met The Queen, features subjects from all over the Commonwealth, talking about their once-in-a-lifetime experience of an audience with Her Majesty.

One is retired fire fighter Lee Ielpi, who met the Queen at the 9/11 Tribute Museum in New York. Lee lost his son Jonathan, 29, also a firefighter, in the attack on the Twin Towers, and helped carry his body from the wreckage.

He tells of his bemusement as he was briefed on royal protocol. ‘You have to understand my upbringing is Italian, and my mommy says, ‘When you meet an older lady you give her a hug and a kiss,’ so I said that to the Special Service guy and he said, ‘Are you crazy?’

When it came to their meeting the Queen ‘put her hand out’ and simply listened as Lee told his terrible story. She worked the room, speaking to every single person.

And he in turn was blown away by the power of the occasion. ‘It was one of the hottest days of the year, 105 degrees, and that woman did not break a sweat. The dignity she showed.’

The Queen’s impish sense of humour is evidenced here too, most hilariously when Nelson Mandela’s former private secretary, Zelda la Grange, describes her first meeting with Her Majesty. It was 1998, and she was accompanying the irrepressible Mandela, whom the Queen adored, on a trip in London.

She was horrified when Mandela strode towards Her Majesty, a huge smile on his face, and declared, ‘Oh Elizabeth, you’ve lost weight!’

‘I was so embarrassed on her behalf,’ recalls Zelda. ‘This was very inappropriate.

‘Afterwards his wife reprimanded him, saying, ‘You can’t comment on the Queen’s weight.’ But how did the Queen react? ‘She was just laughing.’

Perhaps typical of all such encounters is the account of footballer Tim Cahill, who played for Australia and Everton. He describes being ‘more nervous meeting her than lining up for Australia in front of 80,000 people’.

They chatted about his career and he wanted to ask who she supported, but didn’t dare. Cahill says the suit he wore that day is still in his wardrobe, treasured. ‘It’s still hanging up. She touched it, yes, and it has not been washed.’

An intriguing way of remembering a special encounter, but one that speaks volumes about the significance.