One day at a time. Naomie Olindo marked late father Joel’s birthday by sharing a handful of her favorite family memories — and penning a heartfelt tribute in his honor.

“Happy birthday papa d’amour,” the former Southern Charm star, 29, wrote in an Instagram Story on Wednesday, August 18, alongside a throwback photo with her dad. “I miss you more every day. What I would give to go back to this day with you. Just riding around on a moped together laughing our butts off and taking this picture to send mom. I love you forever.” 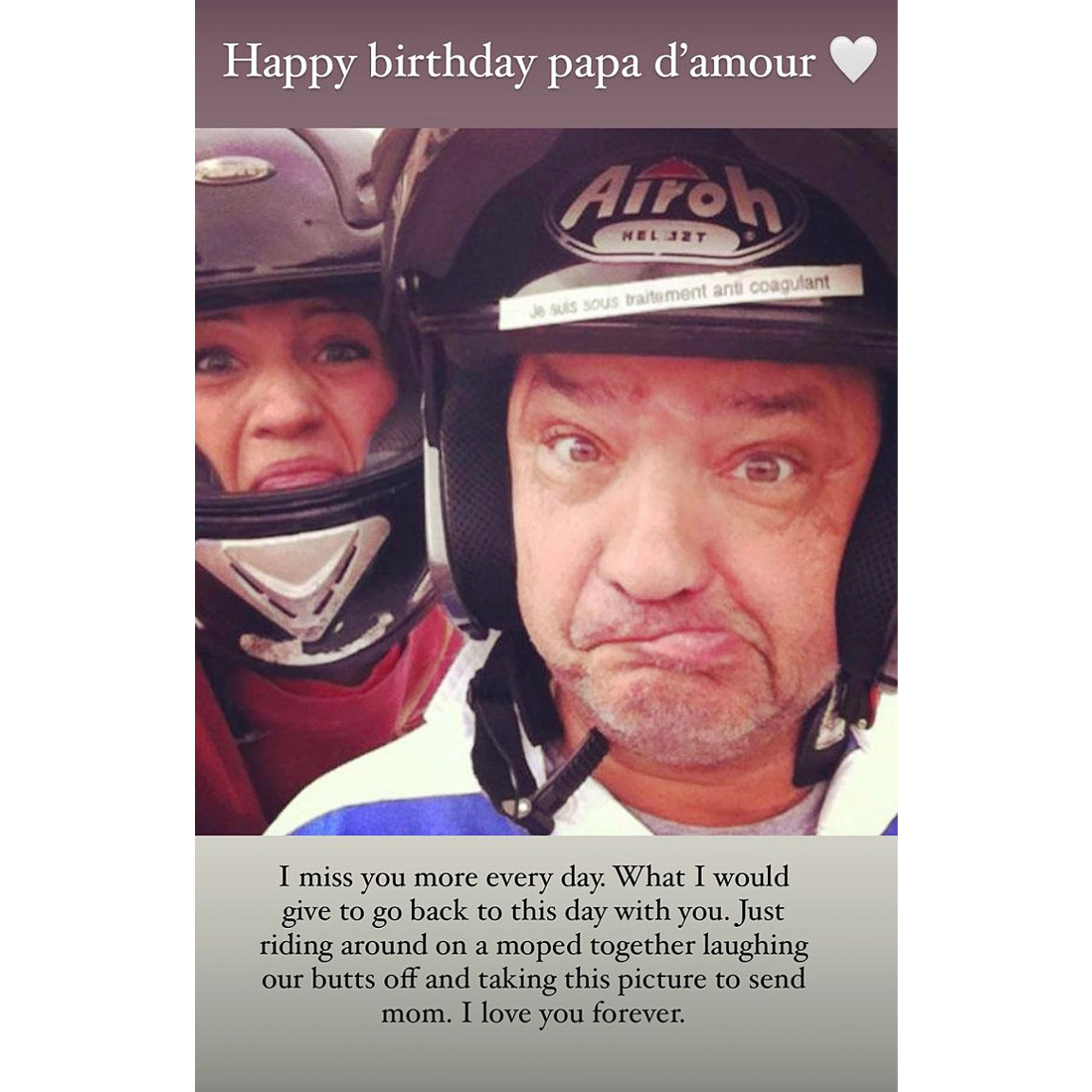 The reality TV alum lost her dad in December 2019 after his year-long battle with esophageal cancer. “I missed him before he was even gone, and I can’t imagine what this road will be like,” she wrote via social media at the time. “If someone you love is fighting this horrible disease, please know my heart is with you and it truly aches for you.”

While celebrating his life on Wednesday, Olindo remembered how her dad was “the life of the party” and would always “hold a cat after dinner no matter what.” She missed traveling with him and the way he never expressed “one complaint” while he struggled with his health.

“That smile ❤️,” she wrote. “And even this smile, while fighting for your life.”

The former Bravo personality went on to reveal that she keeps a photo of her dad as her phone background. “When a text comes in it’s like you deliver it with your sass,” she added. “I can’t wait to see you again one day 🤍.”

Olindo ended with a French phrase, which translates to, “I love you forever, Daddy.”

One day prior, the L’ABEYE founder shared an empowering quote from Untamed author Glennon Doyle, teasing, “Have I just had a glass of wine on an empty stomach or does this resonate???”

The passage, shared to Olindo’s Instagram Story, read: “You’re actually not a mess at all. You’re just a feeling person in a messy world. You are exactly right to feel a lot right now. It does not mean you’re weak — it means you’re strong enough to be paying attention. Be gentle with you, please.”

Olindo has been candid about her emotions since splitting from boyfriend Metul Shah in July after nearly three years together. Earlier this week, eagle-eyed followers noticed that Shah wiped several photos of Olindo from his Instagram page, one month after she did the same.

Fans were shocked by the pair’s breakup and speculated soon after the split made headlines that infidelity was at the root of the drama. Olindo seemingly confirmed the rumors with a teary-eyed selfie in July.

“Nothing will be worse than losing my dad but this is a close second,” she wrote. “Betrayal is never easy for anyone and I’m just so sorry to anyone else that has stumbled across those terrible messages. I’m absolutely positive I will regret posting this tomorrow but so many of you have reached out saying you’re feeling a similar pain. I’m so so sorry.”