National MPs, including former leader Michael McCormack, have taken aim at controversial colleague George Christensen, accusing him of “stirring up” violent mobs at anti-lockdown protests and using his profile as a government MP to validate their behaviour.

Mr McCormack said the controversial backbench MP needed to think “long and hard” about his actions and should publicly apologise for several incendiary statements on social media, which included calling for the arrest of two Victoria Police officers for using “excessive force” at protests at the weekend. 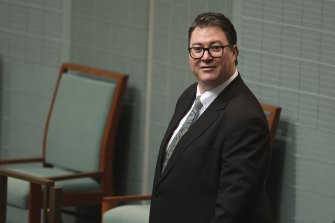 Nationals MP George Christensen has been accused by Nationals colleagues of “stirring up” violent mobs.Credit:Alex Ellinghausen

Mr Christensen’s comments supporting “freedom fighters” at the ugly rallies in Melbourne have reignited fierce divisions within the party, with furious MPs swapping angry texts with each other on Monday on a group message service.

The conversation became so heated Mr Christensen removed himself from the group on the encrypted messaging app Signal, as did Victorian MP Darren Chester, who has been a lead critic of his Queensland colleague.

Mr McCormack, who was dumped as party leader in June, said Mr Christensen’s comments were “ill-informed” and potentially “inciting violence” against police. He said Mr Christensen was “hiding under the doona” and had become the “keyboard warrior” he had long rallied against.

The former deputy prime minister also criticised his successor, Barnaby Joyce, for not publicly condemning Mr Christensen’s comments when given the opportunity on Monday. 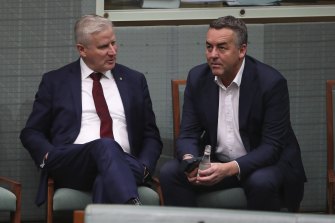 Michael McCormack and Darren Chester were both outspoken against Mr Christensen.Credit:Alex Ellinghausen

“If the leader is incapable, unwilling or unable to call him out then I am going to,” Mr McCormack, whose son Nicholas is a NSW police officer, said.

“These police officers are, at the direction of state governments, keeping people safe and do not deserve to be punched, kicked, spat at and stomped on. These are not freedom fighters, they are angry men looking for a fight.

“For a federal MP to basically encourage this behaviour is appalling, and I’m sorry, but it needs to be called out. He should delete it, delete it immediately and apologise.”

Mr Christensen’s comment was directed at two Victoria police officers who were filmed dousing a woman with capsicum spray at the protest. He posted footage of the incident showing the woman being pushed backwards and falling to the ground, covering her face with her hands, before a uniformed officer leaned over her and sprayed her to the face.

Victoria Police said the matter would be investigated by ethical standards.

Mr Christensen has criticised some violent protesters, alleging some were potentially “agent provocateurs” and part of the left-wing, anti-fascist group Antifa who were undermining the “cause of freedom”.

Mr Joyce said on Monday he would not seek to silence Mr Christensen, who will leave Federal Parliament at the next election, and said he was entitled to publicly express his views.

“I can’t control George, nor do I want to. I can have a discussion with him and I can explain my difference of opinion on some things,” he said. “But I don’t believe we should be arresting police. I think police have had an absolute hell of a time trying to deal with this.”

Nationals MP Pat Conaghan, a former NSW police officer, said unless people had done the job they did not appreciate how difficult it was.

“I doubt very much whether George has ever seen an angry man in his life. The police are dealing with union thugs and hired muscle and under extreme pressure,” he said.

Mr Chester said Mr Christensen’s words were likely to “give comfort to those who would seek to harm serving police officers”.

“He conveniently ignores the fact that police were punched, kicked and stomped on by protesters,” he said.

“There are also well-established internal police processes which exist for investigating any allegations of wrongdoing by serving officers and they should not be accused and convicted by social media stunts from the Member for Dawson.”

Mr Christensen did not respond to inquiries from The Sydney Morning Herald and The Age but took to social media to criticise his colleagues for taking offence at his comments and running off to a “left-wing journalist to complain” about him.

“Those who think such actions are justified will have to explain themselves,” he wrote.