Nearly 500 positive cases of COVID-19 have been linked to Milwaukee’s Deer District, the site of massive celebrations over the Bucks’ NBA championship run last month, according to the Milwaukee Health Department. The department confirmed to CBS News that 491 people who had been to the Deer District in July tested positive for the virus.

The district filled with fans in mid-July, as Giannis Antetokounmpo helped lead the Bucks to a 4-2 series victory over the Phoenix Suns and clinched the city’s first NBA title in 50 years. CBS Milwaukee affiliate WDJT-TV captured residents partying into the night, as fans flooded the district to celebrate the win.

Officials cautioned that the cases cannot be definitively linked to NBA final celebrations, given that the cases covered everyone who visited the district at some point in July. State health officials are still currently overseeing contact tracing. 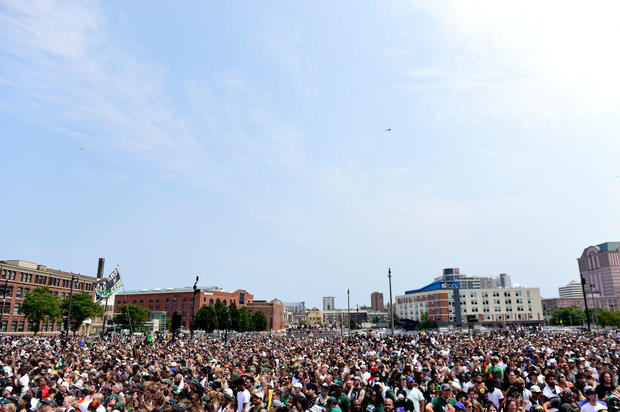 City of Milwaukee Health Commissioner Kirsten Johnson said in a press conference Tuesday that the Deer District reports comprise just a small fraction of Wisconsin’s overall COVID-19 cases. The state reported 1,573 new cases on Wednesday alone, according to data from the Wisconsin Department of Health Services.

But Johnson noted that those 491 people likely transmitted the virus to others. “They were also going to bars and parties at friends’ houses and family events and people are gathering with others,” she said. “And that is going to cause a spread.”

Since the beginning of 2021, over 98% of COVID-19 cases in Wisconsin occurred in people who had not been vaccinated, the department said in a July press release. As the Delta variant continues to spread around Wisconsin, health officials are urging residents to get vaccinated and continue to wear masks indoors or in highly populated areas.

“We urge Wisconsinites to get vaccinated,” Deputy Secretary Willems Van Dijk said in the release. “We must protect our children as they head back to school this fall, along with all other Wisconsinites who are at an increased risk for being hospitalized from COVID-19. Vaccines and the additional protection from wearing masks are the best combination of tools to achieve this goal.”