Liberal MP Andrew Laming has hit out at the federal government’s new efforts to reverse entrenched Indigenous disadvantage, warning the gap will never be closed unless community leaders are empowered to lead the way.

The Coalition backbencher used the 13th anniversary of former prime minister Kevin Rudd’s apology to the stolen generations to tell Federal Parliament Indigenous communities were being “corroded from beneath” by government welfare payments that had been imposed “as a Western model”. 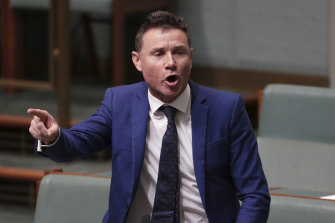 Liberal MP Andrew Laming has hit out at new targets designed to help close the gap between Indigenous and non-Indigenous Australians.Credit:Alex Ellinghausen

He said the new national agreement on Closing the Gap was doomed unless the nation was prepared to ask itself the “hard questions” on how it could turn around troubling education, unemployment and incarceration levels.

After more than a decade of failure and backwards steps, federal and state governments agreed in 2019 to the first Indigenous-led reform of the Closing the Gap socio-economic targets, increasing them from seven to 16.

The commitment was embedded in an historic partnership agreement with the Coalition of Peaks, made up of more than 55 Aboriginal and Torres Strait Islander community-controlled bodies from across the country.

But senior Indigenous leaders including Noel Pearson, professor Megan Davis and Roy Ah-See have criticised the Coalition of Peaks for lacking a mandate and not representing the views of Indigenous Australians.

Dr Laming, who last month was slammed over a social media post that said addressing petrol sniffing and truancy levels in Indigenous communities was more important than debating Australia Day, said there was no guarantee the targets would change a decade of failure to reach the agreed targets.

“Are we prepared as a nation to have the hard conversation around empowering Indigenous men and women to lead their own communities?” Mr Laming asked the House of Representatives. “This is about allowing senior men and women not just to lead, but to have the power to.”

The Queensland MP said Indigenous Australians needed a say in developing the curriculum, the syllabus and the bilingual nature of education so they had “complete ownership of the successes and the failures”.

Dr Laming, a former Indigenous health researcher, warned targets in employment could not be met without ending a “distortion” created by non-Indigenous Australia and ensuring a thriving services sector to create non-government employment.

“You simply can’t employ every Indigenous Australian in the government and call it a success.”

He also said it was the rate of Indigenous offending that mattered, not incarceration numbers.

“That’s just an administrative output by the judge. You’ve got to stop the offending; that’s the goal that needs to be closed,” he said.

Indigenous Australians Minister Ken Wyatt said the government was committed to working in genuine partnership with Aboriginal and Torres Strait Islander Australians because it would produce the “best outcomes”.

“Significant progress is being made. It is about thinking differently,” Mr Wyatt told Parliament.

“But there is much more to do. I again state that our commitment to working in genuine partnership is the foundation for the changes that we need to achieve.“

Opposition Indigenous Australians spokeswoman Linda Burney said Labor supported the new approach to Closing the Gap and the fresh targets, but they must not become a “bureaucratic sleight of hand” that let Parliament “off the hook for another decade”.

She said last year’s report showed only two of the seven targets were on track after more than a decade and the other five were not.

“We want to see real and lasting progress on Closing the Gap. First Nations People must be at the centre of decision making.”

close, help, New, t, targets, Won't
You may also like: