A suburban council whose residents suffered almost 1000 coronavirus infections in Victoria’s second wave last year has set up its own mass vaccination clinic, in another sign of the slow pace of the nation’s immunisation rollout.

And Wyndham Council has taken aim at the Victorian government for failing to establish a mass vaccination centre in the outer west to get its 289,000 residents vaccinated swiftly. 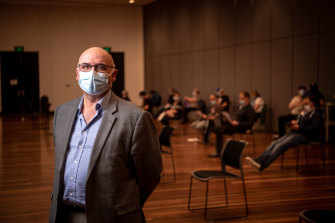 The council takes in suburbs including Werribee and Point Cook and had 942 coronavirus cases last year – making it by far the worst-hit local government area in the nation. On Thursday, Wyndham opened a weekly vaccination hub in its Encore entertainment centre in Hoppers Crossing, in partnership with 40 local GP clinics.

Mayor Adele Hegedich hoped the centre would “fill the gap left by the lack of a state-run mass vaccination hub in the region”.

The biggest vaccination centres set up by the state are in inner Melbourne, at the Melbourne Showgrounds in Ascot Vale, the Royal Exhibition Building in Carlton and the Melbourne Exhibition and Convention Centre near Southbank. There are also smaller sites around Melbourne.

“Why should people who live in the inner city have the opportunity to be better protected against the virus, when all of the data last year showed the outer suburbs, particularly Wyndham, was [the] most impacted?” Cr Hegedich said.

Wyndham councillors believe the state should have focused more heavily on the west because of its more vulnerable population. “Wyndham has a highly casualised workforce – how are people who have no holiday leave, no sick leave meant to find time to go and line up at Jeff’s Shed for hours on end just to get vaccinated? It’s inequitable,” Cr Hegedich said.

The Age asked Victorian Health Minister Martin Foley why the state had placed its mass vaccination clinics in inner Melbourne. In response, the Health Department issued a statement saying one of Victoria’s largest walk-in vaccination centres was at Sunshine Hospital, “supported by other vaccination sites in Werribee and Deer Park”. It noted that more than 170,000 doses had been administered through Western Health’s state-run sites.

The council-run clinic is also another marker of the pace of the federal vaccine rollout. By Wednesday night there had been almost 5.5 million vaccine doses given to Australians. About 2 per cent of the population has been fully vaccinated.

A spokeswoman for the federal Health Department responded after The Age asked Health Minister Greg Hunt why it had fallen to councils to set up GP hubs, and if there were enough vaccination sites planned for Melbourne’s outer west.

The spokeswoman said the GPs in the Wyndham initiative were all part of the COVID-19 vaccination program supported by the Commonwealth. GPs had administered 3 million doses around Australia, including 785,000 in Victoria, she said. And there were 40 primary care vaccination sites in the Wyndham region and more than 100 such sites in Melbourne’s outer west.

Cr Hegedich said it was important residents in the west were able to see their GP for vaccination as easily as possible. “We know our residents trust their local GPs, so it makes sense to give them greater access,” she said. “Vaccinations are our best way out of lockdowns and out of this pandemic.”

Other councils around Melbourne have been instrumental in encouraging local GPs and community health organisations to offer immunisation programs, but Wyndham is the first municipality to set up its own centre that can vaccinate so many each day.

Wyndham Council argues that most GPs can only vaccinate 10 people a day due to their size. By using the council’s larger centre, GPs will be able to vaccinate up to 100 people in two hours.

Joe Garra is a GP at MyClinic in Werribee who helped set up the new clinic with the council. He said it was difficult to get enough patients through individual GP clinics. Issues included where to put socially distancing people who had had a jab and then had to wait 15 minutes afterwards.

Dr Garra said there was still a lot of hesitancy in the west, and this needed to change urgently in older people. “People are still waiting for Pfizer, but if you’re over 50, AstraZeneca is fine – it’s a one-in-a-million death rate.”

Associate Professor Holly Seale from the University of NSW is an infectious diseases social scientist whose research has looked at immunisation, particularly in migrant communities.

She said there needed to be caution in any assumptions on who would be willing or unwilling to get vaccinated, regardless of whether they were Australian born or migrants.

“A range of ages and genders and socioeconomic backgrounds share reservations about vaccines, whether they are from migrant or non-migrant backgrounds.”

She said before COVID-19 hit, there were already disparities in vaccine uptake for things like flu between people born and not born in Australia, for children, adolescents and adults. There were various reasons for this, she said. “We should not assume that it is because of negative attitudes towards immunisation”.

The challenge is that “we know there is misinformation circulating about coronavirus and the COVID vaccine in some culturally and linguistically diverse communities,” she said.

“While we have been tracking the information on social media, we also have heard about rumours and conspiracy theories circulating on closed systems like WhatsApp,” Professor Seale said. Working out how to address this sort of misinformation and help local community groups fight these sorts of rumours should be a priority, she said.

Her group’s research also showed community members continued to get some information about COVID-19 and vaccines via news channels streamed from their country of origin.

“We found from research that we can put all the information we want in whatever languages we want, but if people’s preferences are to stream news from their country of origin, it may not matter what we do. So we need to be persistent.”

She said local, state and federal government campaigns needed to constantly remind all people of why Australia had chosen the vaccination program that it had, “so people feel comfortable with what’s available”.

for, hub, Melbourne, New, vaccine
You may also like: