No austerity: Frydenberg to fire up economy in major shift to budget policy

Treasurer Josh Frydenberg will use his post-pandemic budget to deliberately run the economy as fast as possible in a bid to drive the nation’s jobless rate below 5 per cent, upending the federal government’s fiscal policy.

In a major shift in rhetoric and budget policy, Mr Frydenberg will on Thursday use a speech to bring the government’s spending plans in line with the Reserve Bank’s own aggressive monetary policy stance while abandoning any rush to post-pandemic austerity. 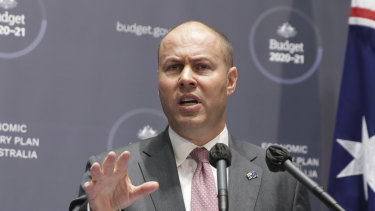 Last year Josh Frydenberg said budget repair would not start until unemployment was comfortably below 6 per cent. That plan will be dumped in this budget.Credit: Alex Ellinghausen

Mr Frydenberg has overseen the largest budget deficits since World War II, with the 2019-20 shortfall of $85.3 billion to be dwarfed by a deficit of at least $150 billion in the current year. In next month’s budget he is expected to forecast a deficit for 2021-22 of at least $50 billion.

A new report from the independent Parliamentary Budget Office also shows the debts run up dealing with the coronavirus pandemic will weigh on the budget for a generation.

The Treasurer had previously promised not to start the government’s budget repair plan until unemployment was “comfortably below 6 per cent”. The jobless rate fell to 5.6 per cent in March but with JobKeeper ending that month, both Treasury and private economists believe it could drift higher.

Prominent economists have warned the government not to withdraw support for the economy too quickly in the wake of the pandemic, with many concerned monetary policy cannot do any more to support the jobs market and businesses.

On Thursday Mr Frydenberg will instead set the government’s sights on a jobless rate below 5 per cent, a rate not seen since the first mining boom between 2006 and 2008.

“We need to continue working hard to drive the unemployment rate lower,” he will say in the speech to be made in Canberra.

“That is what next week’s budget will do. We will not move to the second phase of our fiscal strategy until we are confident that we have secured the economic recovery.

“We first want to drive the unemployment rate down to where it was prior to the pandemic and then even lower. And we want to see that sustained.”

Before the pandemic, the government had been focused on bringing the budget back to surplus. At the same time, however, the Reserve Bank took official interest rates to a then-record low of 0.75 per cent while encouraging governments to lift investment spending in a bid to bring down the jobless rate and lift wages growth.

The RBA now has official interest rates at 0.1 per cent, is engaged in an estimated $300 billion worth of quantitative easing and has stated interest rates will not increase until at least 2024.

Mr Frydenberg will say it now appears unemployment will have to be in the 4 per cent range to get inflation and wages to accelerate. With the RBA unable to cut interest rates further, the government will have to do more heavy lifting to support the economy.

While committing to budget repair, the Treasurer will argue it won’t be done with spending cuts.

“Our challenge, once we recover from this crisis, is to again rebuild our fiscal buffers. We have done it before and we will do it again,” he will say.

“But we won’t be undertaking any sharp pivots towards austerity.”

ANZ economists David Plank and Hayden Dimes, who expect a deficit of $170 billion this year and $70 billion next year, said spending cuts were not necessary as the budget was improving on the back of a stronger economy and extremely high commodity prices.

Iron ore on Wednesday set a fresh record of $US194 a tonne while exports of the mineral reached an all-time monthly high of $14.5 billion during March.

“[The government] is likely to spend only some of the additional improvement in the fiscal position as a result of the stronger economic outlook,” they said.

That bottom line will take years to recover, according to the Parliamentary Budget Office which used a report on Wednesday to reveal the full impact of the coronavirus pandemic on the nation’s finances.

In the best outcome, the budget would not return to surplus until 2038-39, more than two decades since the last surplus. If conditions follow past trends, the deficit would be more than $56 billion at the end of this decade.

“The level of debt is likely to remain high for a generation,” it said.

“Reducing the government debt-to-GDP ratio to pre-pandemic levels will take decades, even under relatively optimistic scenarios. However, debt servicing costs should remain subdued as the existing debt was borrowed at historically low interest rates.”

Austerity, FI, Frydenberg, No, to
You may also like: