A lack of clarity over which jobs are considered truly essential has opened the floodgates for workers as widespread as real estate agents, delivery drivers and telecommunications repairers to demand priority access to vaccinations.

The push from industry associations to get a huge range of different groups immunised underscores the pressure on vaccine supplies, with concerns about the Sydney shutdown and workplace transmissions growing alongside confusion about which workers are absolutely necessary during the latest coronavirus outbreak. 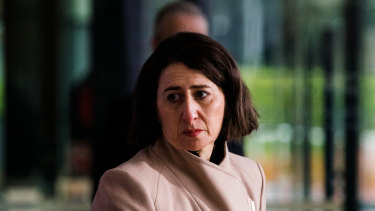 NSW Premier Gladys Berejiklian on Wednesday in Sydney said there was no definition of who is an essential worker.Credit:James Brickwood

NSW Premier Gladys Berejiklian said on Wednesday there is “no definition of what is and is not essential”.

“We’ve seen examples elsewhere in other jurisdictions where it amounted to chaos when you tried to define every single occupation,” Ms Berejiklian said.

Victoria last year defined lists of essential workers and businesses, including food stores, emergency services and some journalism and construction workers, who were eligible for permits to leave home during its stage four lockdown.

In June, the national cabinet agreed not to identify high priority workers for vaccinations as originally announced by the federal government in January. Instead, it decided to vaccinate people based on age, a federal Department of Health spokesman said.

Some priority workers, such as those working in the emergency services, aged care, and hotel quarantine, are already eligible for vaccination.

Real Estate Institute of NSW chief executive Tim McKibbin said agents who have to be on site to work should be given priority access to vaccines.

“What it boils down to is there are three things we must have – food, water and shelter,” he said.

“These three things are critical and essential. For those who are out in the community and attached to these essential services, as opposed to those who can work from home, logically it makes sense to immunise or at least offer to immunise them.”

Telecommunications representative group Communications Alliance chief executive John Stanton said field and operational staff required to fix and install equipment, including at aged care homes, should be given early access to the vaccine.

“We have campaigned – with a distinct lack of success – for relevant telco staff to be given appropriate prioritisation for COVID-19 vaccination,” Mr Stanton said.

He said telecommunications services were critical, particularly with more people working and learning from home.

“Retail workers have remained at the coalface of the COVID workforce – often as Australians only point of interaction outside the home during lockdowns and restrictions,” Mr Zahra said.

Analysis by the Shop, Distributive and Allied Employees Association earlier this week found 91 per cent of casual contracts in the Fairfield, Liverpool and Canterbury-Bankstown areas of Sydney were in shops or shopping centres, along with 55 per cent of close contacts.

“The NSW government must offer priority vaccination to retail workers to protect their health as well as that of the broader community,” the union’s state secretary Bernie Smith said.

“There would be few categories of workers that are required to have such diverse public interaction in the course of their duties in comparison to our members,” they said.

Australian Road Transport Industrial Organisation NSW secretary-treasurer Laurie D’Apice said “any driver” including those on long-haul trips and short journey deliveries is at risk of COVID and should be considered for early vaccinations.

“They’re going in and out of red zones all the time, so as far as I’m concerned they’ve been real heroes,” Mr D’Apice said. “I’m not saying they’re first responders, but certainly they should have some priority in terms of vaccines.”