‘No time for austerity’: Frydenberg puts the priority on economic repair

Australians passed a milestone in a marathon during the past few weeks when the country grew strongly enough to undo the great shrinking of the national economy last year.

Treasurer Josh Frydenberg will not even claim to have passed this marker in the recovery from crisis, but economists believe the nation’s gross domestic product is now as big as it was before the pandemic. 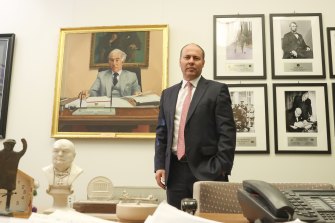 Treasurer Josh Frydenberg in his office in Parliament House.Credit:Alex Ellinghausen

This was not meant to happen so fast. The pandemic recession destroyed so much economic activity – as measured by the imperfect benchmark of real GDP – that most thought Australia would take years to regain ground.

Official statistics are yet to prove the scale of the gains, but Deloitte Access Economics director Chris Richardson believes the economy returned to its old size at some point in February or March. This reversed the whopping contraction of 0.3 per cent and 7 per cent in two consecutive quarters last year.

There is an even better number for households, too. Richardson says real national income per head, the best measure of living standards, grew by 1.4 per cent in calendar 2020. That is above (but only just) the average of the past decade.

It is astonishing. In a global pandemic, with recessions around the world, amid trade frictions with China and a slow vaccination rollout, Australians have higher incomes, on average, than before the disaster struck.

Frydenberg admits to being surprised at the sheer speed of the recovery.

“I certainly didn’t think we would be in the position we are today with the economy having made up so much lost ground,” he says.

That seems to be shared by Treasury Secretary Steven Kennedy, who warned one year ago of a “prolonged downturn” from COVID-19.

“He is just as surprised,” says Frydenberg.

“Treasury came to me at the height of the pandemic and said the unemployment rate could go as high as 15 per cent – that’s more than two million unemployed. They said GDP growth could be down by more than 20 per cent – that’s the equivalent of taking the construction, the mining, and the manufacturing sectors out simultaneously.

“We’re seeing, on the GDP side, the economy recovering twice as fast and six months earlier than what we were forecasting.”

Australia is one of the only advanced economies to get employment back to the levels seen before the pandemic. The recovery has been much faster than seen in the recession three decades ago.

This is a solid foundation for Frydenberg as he drafts the budget he will deliver on May 11 – an economic plan to be billed as a “recovery” budget after the emergency spending measures of last year.

If only every household could feel the recovery others enjoy. The economic shock has put an immense strain on employers, workers and families. The official figures are yet to reveal the fate of about one million Australians who lost the JobKeeper wage subsidy at the end of last month.

Companies are closing and workers are being laid off. Aviation and tourism are struggling. City centres are yet to return to their old life as people work from home.

So Frydenberg has to offer a pathway out of this uneven recovery. In fact, the good news in the headline numbers means he is under a greater obligation to make sure those gains are shared.

In an interview, Frydenberg says the budget will include more spending on aged care, a series of measures on women’s economic security and a big focus on skills and workforce. He pours cold water on any idea of using budget cuts to reduce the deficit. Instead, it is all about “targeted measures” to help sectors like travel and tourism.

Frydenberg admits the government must do more on skills. Some employers are struggling to get workers while the international border is closed. That makes apprentices even more important. The government moved in March to extend its Boosting Apprenticeship scheme, paying a 50 per cent wage subsidy to those in training, but the Treasurer signals more to come on May 11.

“We focused on apprentices early, not just because of the skill set that they bring, but also because they were the last on the payroll, so they could be the first out in a pandemic,” he says.

“They’re still getting our support.”

One change in the budget will be a fix to the JobMaker Hiring Credit, the $4 billion scheme that offers companies $200 per week if they hire workers aged 16 to 29 and $100 per week for workers aged 30 to 35. Promised as a huge boost to 450,000 jobs, the scheme delivered only 609 new jobs in its first seven weeks, according to details uncovered by The Australian Financial Review.

“It’s been taken up but not in the numbers that we’d initially forecast,” Frydenberg admits, with understatement.

“But that is just one piece of the puzzle. And the puzzle is a picture of declining unemployment. So the programs and the settings have worked. That was a bit of a complex program, because it had a double test in terms of headcount and payroll. There were lots of layers.” 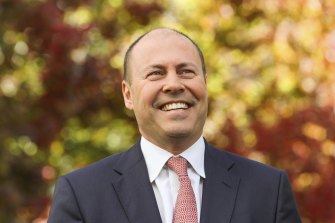 “It’s not a time for austerity measures,” he told reporters on Thursday. “It’s a time to move to the next phase of our recovery plan, which is targeted support.”

What does targeted support mean? More spending. Not as much spending as the government unleashed last year, of course. Frydenberg says about $100 billion of the $251 billion promised last year is still to flow into the economy. Expect more money for industries, and workers, in greatest need.

Saul Eslake, an independent observer who spent years as chief economist at ANZ Group and Bank of America Merrill Lynch, believes Frydenberg has to guard against any anxiety about the deficit when the economy needs more help.

“Much of the budget repair task will happen more or less automatically because the spending decisions, which account for about half the budget blow-out, are by design time-limited and don’t require a conscious decision to terminate them,” Eslake says.

“Frydenberg’s made a pretty good fist of things, and he’s done it in extraordinary circumstances,” he adds. Eslake has seen many treasurers at work. He rates former Labor treasurer Wayne Swan highly, too, for his response to the global financial crisis. Not every treasurer is tested in times as difficult as these.

The immediate test for Frydenberg is to aim the right amount of spending at a moving target. The recovery is underway but hard to be sure about. He names deadly COVID-19 variants and new infection outbreaks as risk factors on his mind.

Frydenberg’s stated position is to review the budget settings – such as the scale of the deficit – when the unemployment rate is “comfortably” below six per cent. He says 5.6 per cent, the rate for March, does not fit that definition. Eslake, along with other economists, believes the Treasurer should lower that benchmark to five per cent.

All the signs are that the Treasurer gets that message. He dismisses austerity, makes no mention of budget cuts and puts all his emphasis on further support. “When it comes to budget repair, the best way to repair the budget is to repair the economy,” he says.

Austerity, for, Fryde, No, time
You may also like: