Follow
Home » Lifestyle » ‘Not a day to waste’: Albanese says Voice referendum will be held in next financial year

Prime Minister Anthony Albanese has confirmed the Voice to parliament referendum will be held in the next financial year, telling Indigenous leaders there is “not a day to waste” as they prepare the strategy for a Yes vote.

Addressing the first meeting of a working group of Indigenous leaders set up to shape the referendum plan, Albanese said he had not settled on a date for the national vote but it would be some time during a year-long window after July next year.

“The timeframe will be from sometime in that financial year … You don’t want to get mixed up in an election period,” Albanese said. 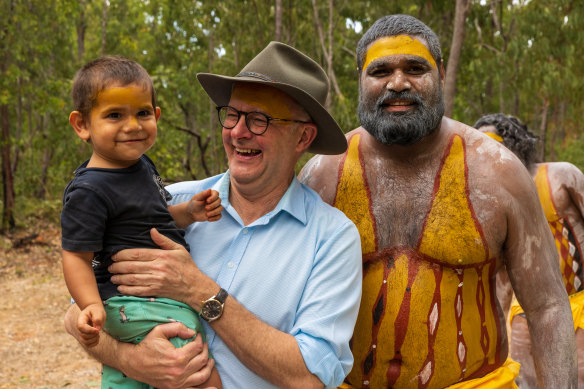 “So we’ve got a little bit of time, but not too much. Not a day to waste.”

He said this was enough time to explain the proposal and “win people over”.

In his strongest remarks to date that Labor will proceed with the referendum even if the risk of failure grows, Albanese told the group that the government was “all in”.

“If we don’t have a referendum, then by definition it won’t succeed. And, if not now, when? And if not under this government, which government is going to have the guts to do it?” he said.

“And so I recognise that there’s a risk. But the risk has to be balanced up with the certainty of failure if you don’t try. And that is what my government has done and what we’ll continue to pursue.”

Touching on concerns about the lack of detail on how the Voice would operate, Albanese said he was deliberately creating the space for people from across the political spectrum to contribute.

He said the draft constitutional amendment to establish the Voice, which he proposed at the Garma Indigenous festival in July, was not final because “we want people to have input and if people have got a little bit of a better idea, then that’s fine as well”.

The draft amendment proposes to empower the Voice to “make representations to parliament and the executive government on matters relating to Aboriginal and Torres Strait Islander Peoples”, with the parliament given the power to decide the body’s composition, functions, powers and procedures.

But key supporters of the Voice have warned the wording needs to be rigorously stress-tested amid a brewing debate over its scope and whether its remit should be limited to specific laws about First Australians.

During a day-long meeting on Thursday, the 21-member working group identified a set of common principles that defined the Voice as a body that “provides independent advice to the parliament and government” but would not have veto power or a program delivery function.

The principles, released in a communiqué, included that the Voice would be “chosen by First Nations people based on the wishes of local communities”, representative of Aboriginal and Torres Strait Islander communities, accountable and transparent, and work alongside existing organisations and traditional structures. It would be “empowering, community-led, inclusive, respectful, culturally informed and gender-balanced, and includes youth”.

A Resolve Political Monitor survey, conducted for The Sydney Morning Herald and The Age earlier this month, showed 64 per cent of voters backed the draft wording proposed by Albanese.

Opposition Leader Peter Dutton this week said there was a range of views within the Coalition on the Voice but it would ultimately adopt a party room position. However, he repeated his criticism that there was a lack of information and detail to form a position.

“It causes me concern that even the most basic of questions can’t be answered by the government and I think that’s given rise to confusion, even with Indigenous leaders that I’ve spoken to in the last 24 hours, who are concerned about what is happening, what’s in place, and what the next steps will be,” Dutton said on Wednesday.