Ready for forever. Ben Affleck made his intentions clear when he proposed to Jennifer Lopez for the second time years after their initial engagement.

Ben Affleck and Jennifer Lopez: Timeline of the Bennifer Romance

The “Jenny From the Block” artist, 53, revealed that her now-husband, 50, inscribed a romantic message on the ring he used to pop the question in April. “Not. Going. Anywhere,” she told Apple Music’s Zane Lowe during a candid interview posted on Monday, November 28. “Because that’s how he would sign his emails when we started talking again. Like, ‘Don’t worry, I’m not going anywhere.’”

Lopez and the Argo director were engaged in the early 2000s but pulled the plug on their 2003 wedding due to heightened media attention. The Gigli costars called it quits the following year, and they each went on to marry other people. The Hustlers actress welcomed twins Emme and Max, now 14, with Marc Anthony, while Affleck shares three children with ex-wife Jennifer Garner: Violet, 16, Seraphina, 13, and Samuel, 10. 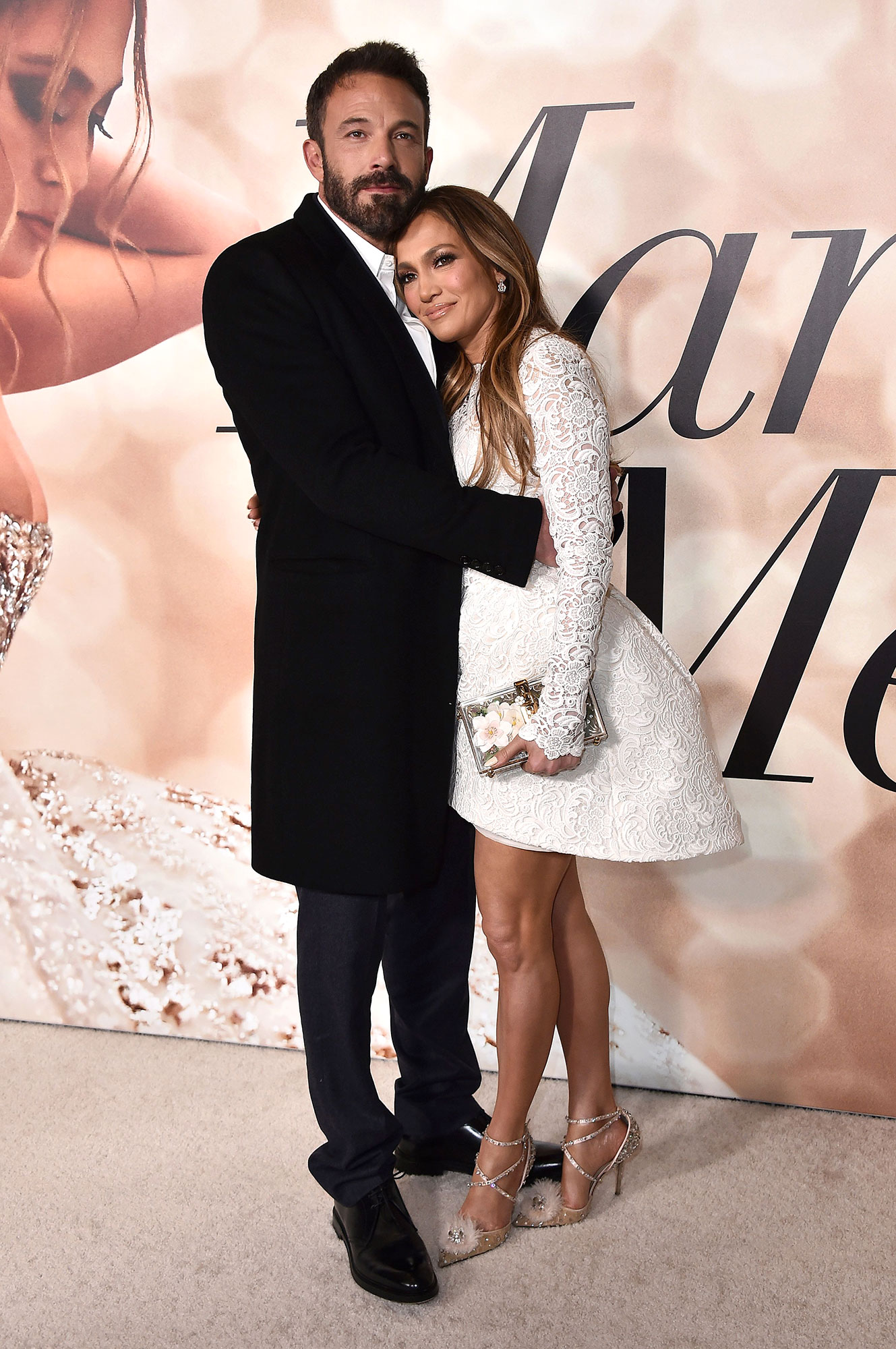 Us Weekly confirmed in May 2021 that the Grammy nominee and the Gone Girl actor were “full-on dating” following her split from Alex Rodriguez. Before Affleck got down on one knee, a source exclusively told Us that the couple already had big ideas for their dream wedding.

Round 2! See Who Did and Didn’t Attend J. Lo and Ben’s Georgia Wedding

“Both Ben and Jen want their wedding to be an elaborate statement of their love story for their friends and family,” the source said in December 2021. “They really want [everyone] to have a good time. They want it to be intimate, but immaculate.”

The twosome shocked fans the following July when they exchanged vows in a low-key Las Vegas ceremony. “They both thought it was a fun and casual way to tie the knot,” an insider exclusively told Us of the surprise nuptials.

One month later, Affleck and Lopez’s friends and family gathered for a second wedding in Georgia. The pair have since given rare glimpses into their lives as newlyweds — and haven’t shied away from gushing over their unique love story. 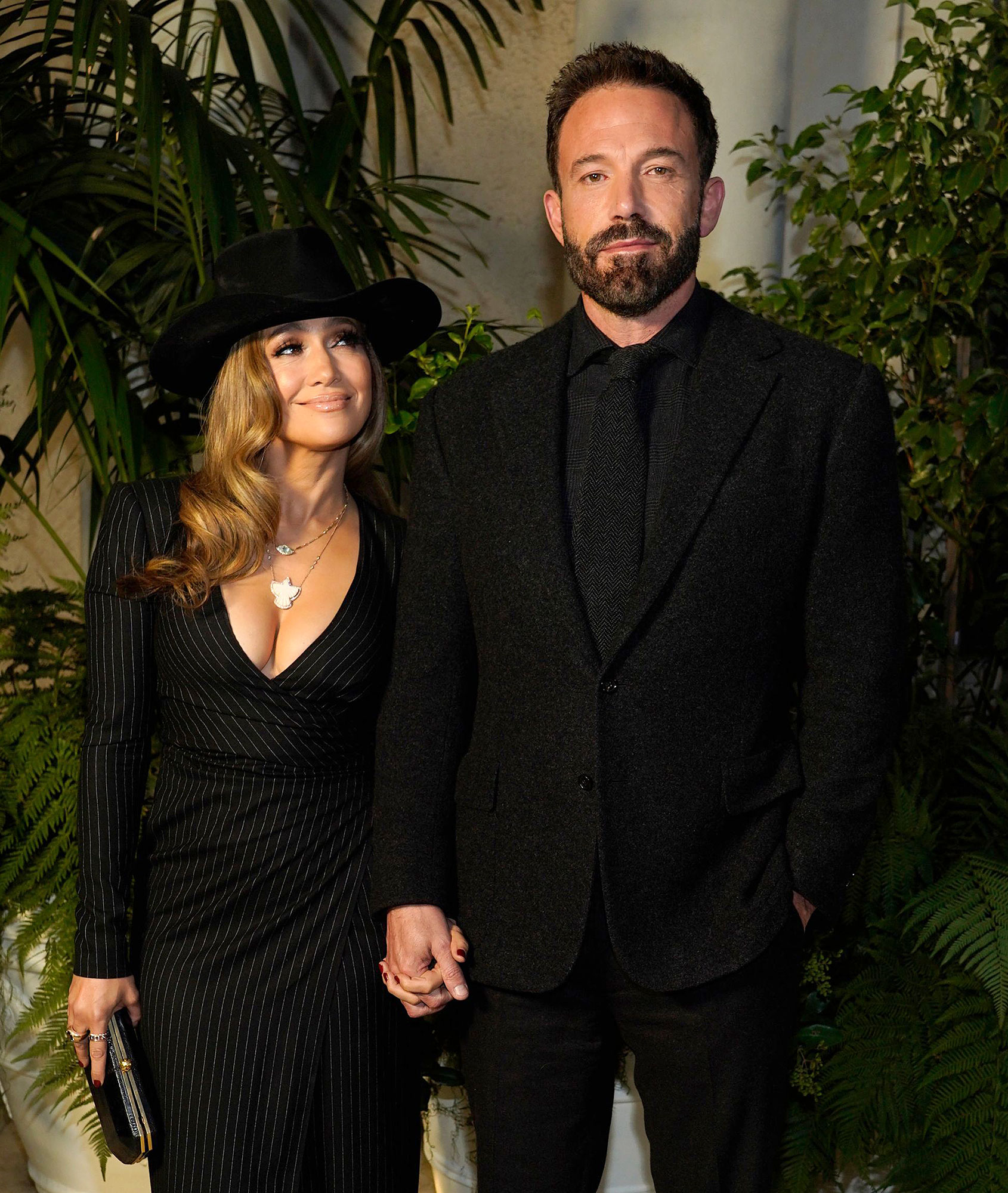 “I always felt like there was a real love there, a true love there,” the JLo Beauty founder told Vogue in her December 2022 cover story. “People in my life know that he was a very, very special person in my life. When we reconnected, those feelings for me were still very real.”

Everything Ben Affleck and Jennifer Lopez Have Said About Their Romance

When it comes to blending their families, the duo haven’t tried to rush. “The transition is a process that needs to be handled with so much care,” she told the outlet, explaining how their respective children have adjusted to the marriage. “They have so many feelings. They’re teens. But it’s going really well so far. What I hope to cultivate with our family is that his kids have a new ally in me and my kids have a new ally in him, someone who really loves and cares about them but can have a different perspective and help me see things that I can’t see with my kids because I’m so emotionally tied up.”

The Second Act star and the Oscar winner recently celebrated their first Thanksgiving as a married couple, sharing a rare look at life at home with their kids. “This Is … Thanksgiving Holiday,” Lopez captioned an Instagram video on Sunday, November 27, documenting the festive traditions with extended family members.