Jason Arrow says it feels like he’s experienced about 18 first nights of Hamilton’s Australian season in less than a year.

He has one of the best entrances in showbusiness, stepping into the spotlight to simply say his character’s name, “Alexander Hamilton”, after the cast around him have sketched a vivid musical introduction of the American revolutionary founding father’s youth, genius and potential.

It often gets applause (or sometimes, to the cast’s amusement, just one person’s unembarrassed “wooo!” ). But when the show has just returned from one of its many COVID-induced shutdowns, “it’s just this screaming”, Arrow says. 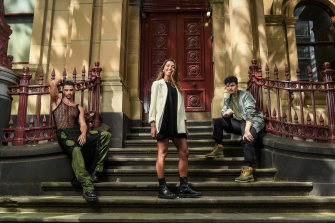 “I think the audience is just as excited as we are to actually be back doing what we love.”

And there’s another big night coming soon. In just over a month the show will close its doors at Sydney’s Lyric Theatre, ahead of a March 15 premiere at Her Majesty’s in Melbourne.

All 10 named-role performers from the show that premiered in Sydney in March last year are coming to open the Melbourne season, the company confirmed this week.

Arrow, Lyndon Watts (who plays Hamilton’s nemesis and colleague Aaron Burr) and Chloe Zuel (who plays Eliza Hamilton) smile and say there was never any question over coming south with the show. It’s much more than a job: it’s a family and an experience that every night exalts and comforts them.

Watts jokes that their nasal passages will never be the same after the countless COVID-19 tests but as the performer who starts the show, he says there is “joy and release” in that moment of introduction. Especially because of how hard it is to get a show on stage at the moment. Or even live a life: the cast were in isolation for Christmas.

“It can be tumultuous, it can be harrowing and challenging,” Watts says. “But the gift of the show is that it gives back to you. As much as you let yourself lean into the show, and let the show hold you, it will reward you.”

Zuel agrees. Before they go out for each performance they pull the cast into a tight circle – a circle that is different almost every night as COVID or fatigue take their toll and understudies swing in and out – and hug each other.

“But even still to this day it takes me a few songs to find the ground and feel like I’m not floating in the air from nerves and excitement,” she says.

“These aren’t usual circumstances. The stakes are higher and we don’t have the chance to be show-fit because of the stopping and starting. For me it’s a lesson to be kinder to yourself, just go with grace and accept what’s coming. Whatever that is.”

Arrow says from the moment he says “Hamilton”, he knows the “vibe” of the show. It’s a beat where he and the audience take each other in, and new beginning for both.

“It’s a show that’s heavily reliant on more than one person. Everyone is doing everything they can to get the show going, and keep it going.”

The Melbourne move will see some turnover among the 35-strong cast, with five new ensemble performers arriving including three from Melbourne.

The newcomers include Dayton Tavares – a familiar face to Australian musicals fans. As a child prodigy, he played Billy Elliot in the original Australian production and then on Broadway: in the US he also performed at the White House for Michelle Obama and sang the American National Anthem at an NFL game. He’s no stranger to Lin-Manuel Miranda’s music: he was in the cast of the 2019 production of In The Heights at Sydney Opera House.

New arrivals also include Eritrea-born singer Shewit Baley in her first major musical and 2020’s inaugural Artists of Colour Initiative winner Martha Berhane who is also of Eritrean descent and trained at the Melbourne Academy of Performing Arts and Victorian College of the Arts.

Tickets are on sale through to the end of July. Producer Michael Cassel has said he intends to take the musical back to Sydney in 2023.