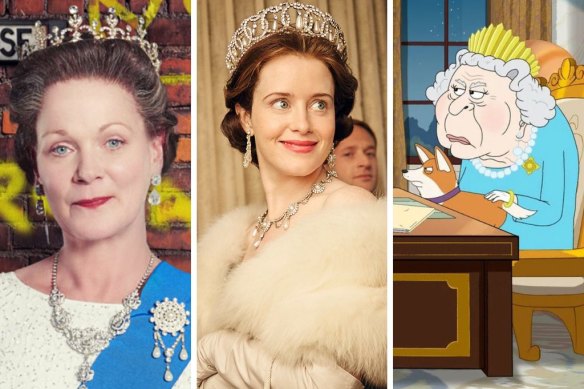 The many portrayals of Queen Elizabeth II include (from left) Samantha Bond, Claire Foy and an animated Queen in The Prince.

While the Queen herself was no doubt one of the most photographed and filmed personalities of the 20th and 21st centuries, depictions of her in popular culture have been as varied as they have been surprising. Some brilliant. Some truly dreadful.

There are the brilliant performances: Mirren, along with Claire Foy and Olivia Colman in The Crown. Some actors, such as Jeannette Charles, Carolyn Sadowska and Anne Stallybrass seem to have made a career out of playing the Queen in small roles in big films, thanks largely to their uncanny resemblance to the real-life counterpart. Other roles are played for comedy, such as Joanna Lumley in Gangsta Granny (2013) and Jennifer Saunders in Minions (2015). And others, such as Neve Campbell in 2004’s Churchill: The Hollywood Years, are so bad they defy belief.

It is a peculiar honour roll, elevated by the fact that some actors have delivered truly luminous performances. It would not be until the late 1990s that substantial explorations of Queen Elizabeth II’s life made it onto the screen – and for much of the first half of the 20th century, the notion of fictionalising her was simply taboo. That is, until the 1970s when many things, not just royal etiquette, seemed to unravel.

Then there are the performances which stand out, either because they were simply brilliant or memorably satirical, such as Gerry Connolly’s dry and delicious take in Fast Forward (and elsewhere), and Frances de la Tour in The Prince. 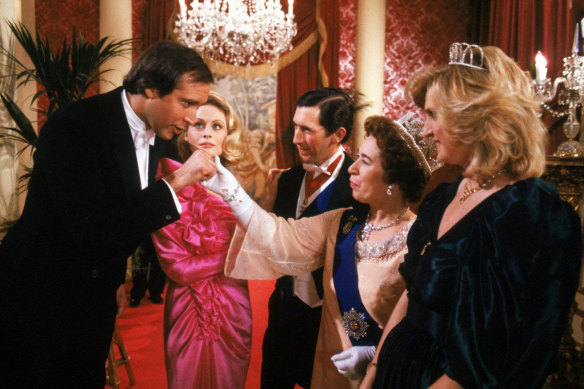 Jeannette Charles, second from right, as the Queen in National Lampoon’s European Vacation (1985).

Charles was not the first; that honour seems to go to Steven Walden, performing in drag in the short film Tricia’s Wedding (1971), which is reportedly the first portrayal of the Queen on film. And to history’s discredit, you won’t even know Charles’ name, but you will recognise her face, which bears an uncanny resemblance to Queen Elizabeth II. So much in fact that Charles was regularly recruited to play the Queen on screen, though not in anything of too much substance, and not in anything longer than a few scenes. Those performances range from Queen Kong (1976) and The Rutles (1978) to National Lampoon’s European Vacation (1985), The Naked Gun (1988) and Austin Powers in Goldmember (2002).

Carolyn Sadowska, The Women of Windsor (1992) 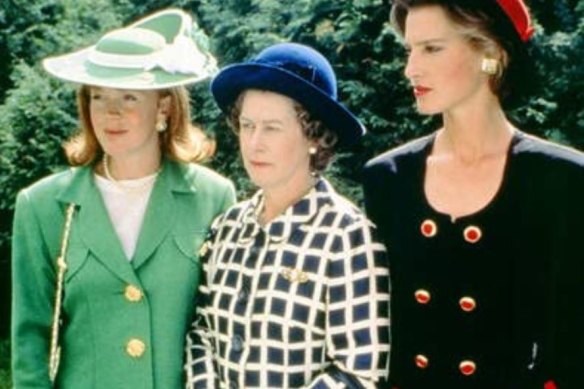 Carolyn Sadowska (centre) as the Queen in The Women of Windsor (1992).

A made-for-television movie from Canada which, as these things do, seemed to gain its biggest traction in Australia, Germany and the United States. This was pure schmaltz with a few redeeming production notes. Directed by Steven Hilliard Stern, Sadowska’s Queen Elizabeth II teeters momentarily on the precipice of satire – as perhaps every portrayal of a truly ubiquitous figure does – but is held in check by solid casting all round: Nicola Formby’s Diana, Sallyanne Law’s Duchess of York and Jim Piddock’s slightly cheek-chewing Prince Charles. Honourable mention in the telemovie category: Anne Stallybrass, who played Queen Elizabeth II in the 1993 miniseries Diana: Her True Story.

Gerry Connolly, Fast Forward (1992 and since) 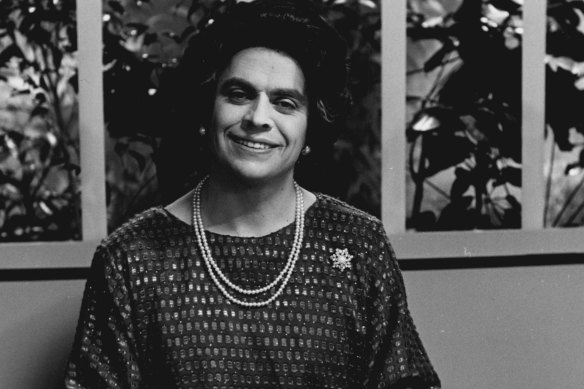 It’s a little unfair to compare a performance on a sketch comedy show with, say, The Crown or The Queen. But to be fair to Connolly, he has made something of a career out of playing the Queen, particularly in Australia. Initially known for his brilliant impersonation of former Queensland premier Sir Joh Bjelke-Petersen, Connolly’s Queen is as nailed-down in the detail as it is brilliantly camp and testament to his versatility as a performer.

Prunella Scales, A Question of Attribution (1992) 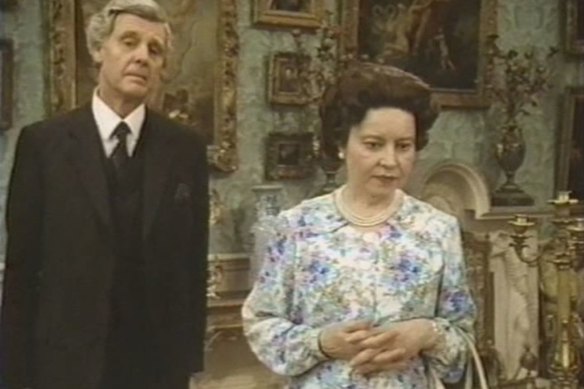 Prunella Scales (right) as the Queen in A Question of Attribution (1992).

As Australia’s Fast Forward mined the royal soap opera for comedy, the BBC produced a TV adaptation of Alan Bennett’s acclaimed stage play about the British art expert and former Soviet spy, Sir Anthony Blunt. In both the stage version and its television adaptation (as well as a later adaptation for radio) the role of Queen Elizabeth II was played by Scales, best known to audiences as Sybil Fawlty in Fawlty Towers. Her Queen Elizabeth II is formidable and complex, an unsung but easy rival to the later performances of Foy, Colman and Mirren. 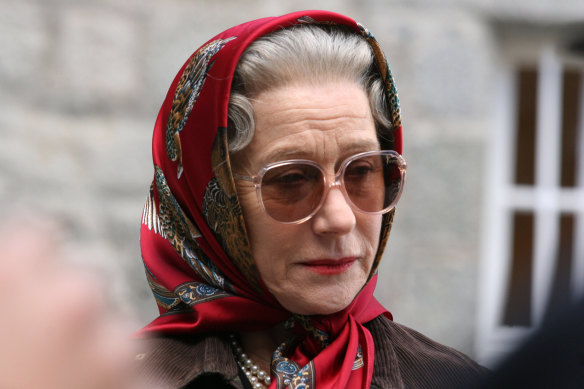 Helen Mirren in The Queen.Credit:Canal+

This is arguably the finest of the more brilliant recent impersonations of the Queen ever filmed. Peter Morgan’s dramatisation of the week following the death of Princess Diana in 1997 was perhaps the first project to push such portrayals out of the bottom drawer of television potboilers and into legitimate art. And Mirren’s Queen Elizabeth II is perhaps unrivalled, though The Crown would later give it a red-hot go. Caught between her duty as a grandmother and the expectation that she should lead the nation in mourning, Mirren’s Queen is a woman at an uncertain crossroads, beautifully building layer upon layer and drawing the audience’s approbation and adoration in equal breaths. 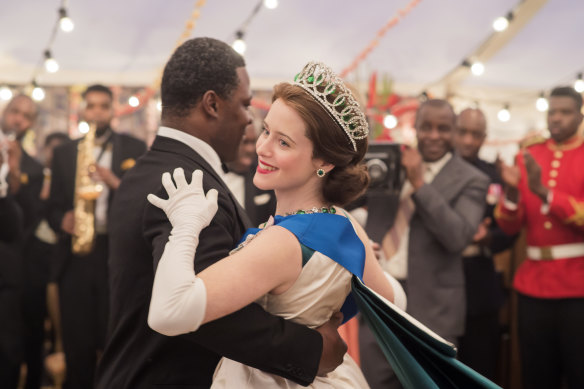 Claire Foy won multiple awards for her performance as Queen Elizabeth II in The Crown.Credit:Netflix

A truly luminous performance, aided enormously by the fact that Foy was playing Queen Elizabeth II during what was essentially her earliest public incarnation, first as a newly married princess and later as she ascended to the throne. In many ways, at least to a younger audience, this is the queen we knew the least about, gifting Foy the opportunity to craft a figure who was both wholly familiar, but also shrouded in mystery. This was Queen Elizabeth II the postage stamp brought to life, and enhanced by Peter Morgan’s stunning writing. Unsurprisingly, Foy went on to win two Primetime Emmys and two Screen Actors Guild awards for her work. 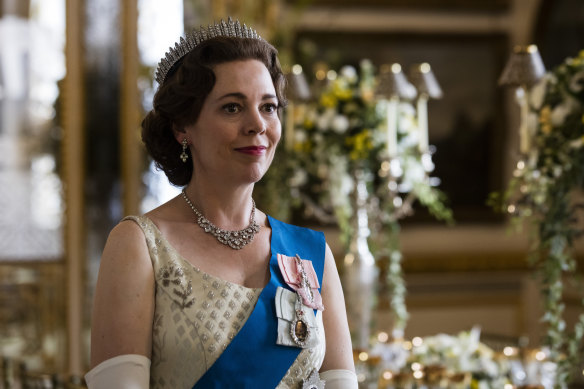 Olivia Colman as Queen Elizabeth II in The Crown.Credit:Netflix

When The Crown advanced the story to the 1970s and early 1980s, it was an ambitious step into a more familiar space in recent memory. That made Colman’s dice-roll on Queen Elizabeth II a real risk. This was Queen Elizabeth II at the giddy height of the royal family’s pre-Diana popularity and, after her arrival, its elevation to the centre of the celebrity maelstrom – something perhaps not seen since the giddy days of Princess Margaret’s social life in the 1960s. But Colman pulled it off, bringing a new dimension to her portrayal, and lending both gravity and humanity to the character. 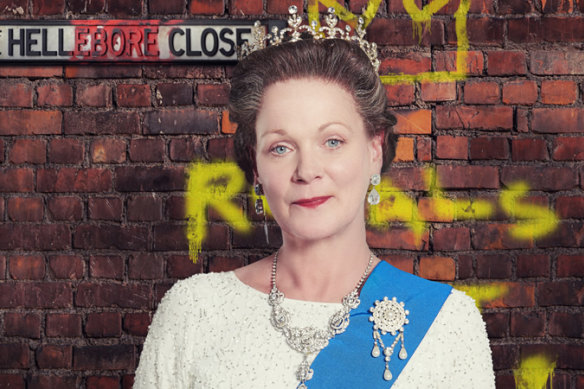 Bond was one of several actresses to play the monarch in the 2009 documentary-drama The Queen and returned to the role for this adaptation of Sue Townsend’s hilarious 1993 novel. After a nightmarish electoral outcome in which the royal family is de-commissioned by a radical Labor government, the Queen (along with Prince Philip, the Queen Mother, Charles, Diana, William and Harry) is demoted to plain old Mrs Mountbatten-Windsor and relocated to a council estate. 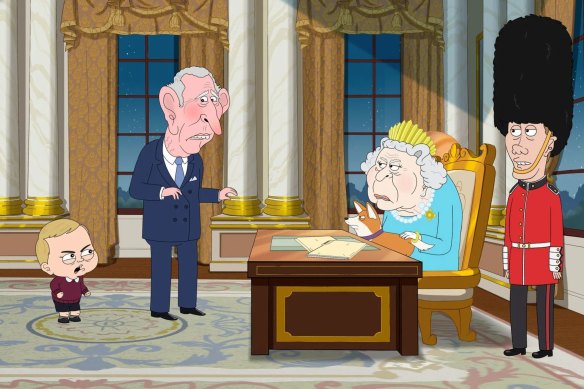 Frances de la Tour voices the Queen in The Prince (2021).

Animated in broad and terrifying brushstrokes, this Queen Elizabeth II is not the star of the show, although she comes terribly close to stealing it. This darkly brilliant satire of the British royal family focuses on William and Kate’s son, Prince George, recast here as a Stewie Griffin-like evil princeling determined to shape his destiny and destroy anyone in his way. De la Tour’s voice, in screeching but terribly grand British notes, just adds more calculated brilliance to an already knockout show. 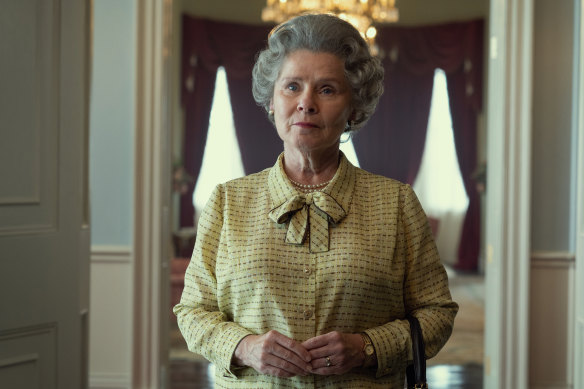 Imelda Staunton as Queen Elizabeth II in the fifth season of The Crown, which will air in 2022.Credit:Netflix

To date, we’ve only been able to glimpse Staunton’s performance in the few fragments of film released ahead of the show’s fifth season. This is Netflix’s flagship royal drama – its platform stablemate, Diana: The Musical, is as horrific as it sounds – and Staunton’s Queen is expected to step smoothly into the shoes left behind by Foy and Colman, enormous though they are. Staunton will be joined by a solid supporting cast, including Dominic West as Prince Charles, Elizabeth Debicki as Princess Diana and Claudia Harrison as Princess Anne.