When Harry met… Salad! Olivia Wilde LEANS INTO bombshell DailyMail.com revelations about collapse of her relationship by sharing vinaigrette recipe from Nora Ephron’s book about divorce from cheating ex-husband

Olivia Wilde has finally shared a recipe for salad dressing, while seemingly making a statement about her bitter split from ex-Jason Sudeikis – days after her ex-nanny told DailyMail.com that the heartbroken actor lay in front of a car to stop the actress from delivering her ‘special’ salad to lover Harry Styles.

The 38-year-old took to Instagram Stories on Tuesday night to post a page from Nora Ephron’s novel Heartburn – an autobiographical book that details the author’s divorce from her cheating ex-husband, famed journalist Carl Bernstein – which features a recipe for red wine vinaigrette.

Wilde’s pointed post comes just two days after her former nanny told DailyMail.com that Sudeikis, 47, was so devastated when he realized his fiancée had prepared her ‘special salad dressing’ for the former One Direction member, that he lay under her vehicle in a desperate bid to prevent her from visiting the British superstar.

The nanny’s story sparked a flurry of speculation and intrigue on social media – where dozens of people called for Wilde to reveal the scandalous recipe to the world, while some questioned what kind of dressing would be worth such a dramatic response from Sudeikis.

Now, Wilde appears to have addressed those questions head-on, by posting a page from Ephron’s best-selling novel in which the author details how her character, Rachel, makes dinner for her husband, Mark, whom she teaches to make a recipe for vinaigrette. 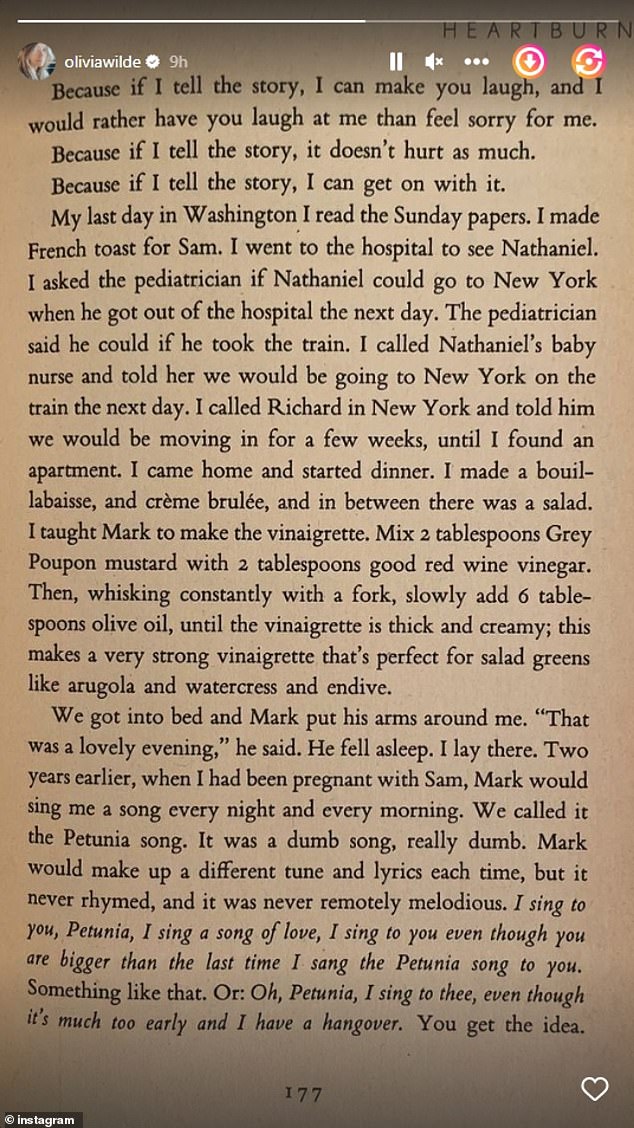 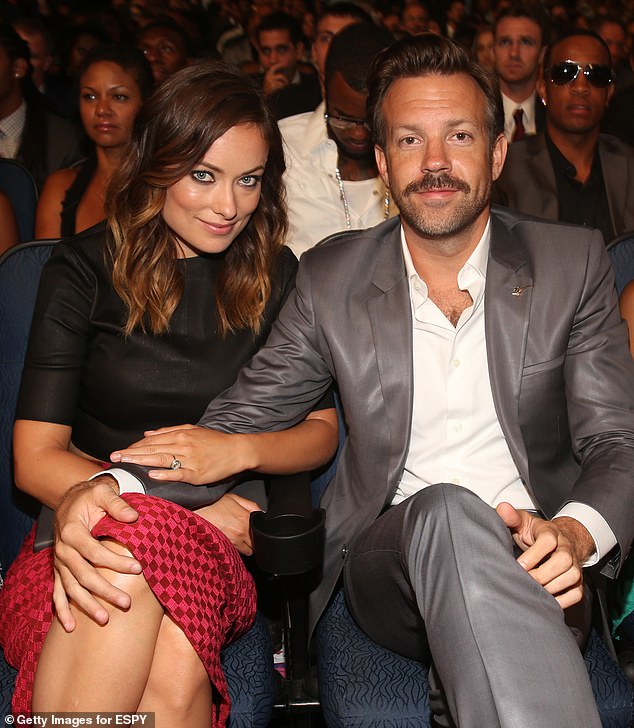 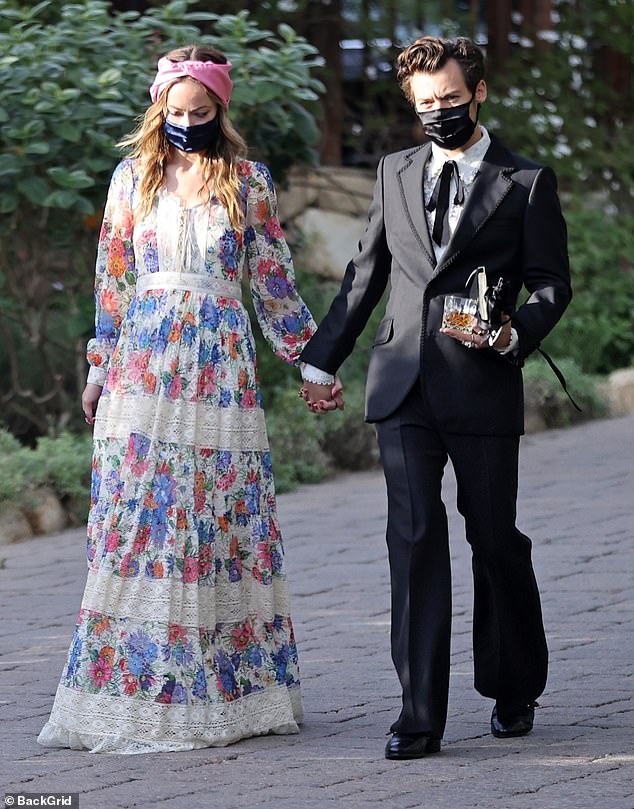 According to the nanny things came to a head between Sudeikis, 47, and Wilde, 38, when he noticed that she had made a salad to bring to Styles, 28

‘I made bouillabaisse, and crème brûlée, and in between there was a salad,’ Ephron – the writer behind famed movie When Harry Met Sally – writes in the tome.

‘Then, whisking constantly with a fork, slowly add 6 tablespoons olive oil, until the vinaigrette is thick and cream; this makes a very strong vinaigrette that’s perfect for salad greens like arugola [sic] and watercress and endive.’

Interestingly, the recipe shared in Ephron’s book is nearly identical to one that Wilde herself previously shared with the Food Network as part of instructions for how to whip up a roasted salmon salad with zucchini and potatoes.

That recipe resurfaced online this week following DailyMail.com’s interview with Wilde and Sudeikis’ former nanny, who cared for the couple’s children – Otis, eight, and Daisy, six – while they were going through their split.

Wilde’s instructions called for many of the same ingredients that are featured in Ephron’s book Heartburn: red wine vinegar, mustard, and olive oil – however the actress added honey, a pinch of kosher salt, and a finely chopped clove of garlic.

‘Add the red wine vinegar, Dijon mustard, honey, salt and garlic to a small bowl and mix to combine,’ she details in the recipe.

‘In a slow steady stream, add 2 to 4 tablespoons olive oil, stirring as you go to emulsify.’

She then calls for the vinaigrette to be added to a bowl of mixed greens, which should be tossed in the mixture, before you add kalamata olives, feta, and cucumber.

Finally, the salad is topped with salmon, zucchini, and potato.

A recipe that Wilde shared with the Food Network for her salmon salad with zucchini and potatoes included a recipe for a red wine vinaigrette.

The recipe requires only six ingredients:

To prepare the dressing, Wilde advises that you ‘add the red wine vinegar, Dijon mustard, honey, salt and garlic to a small bowl and mix to combine. In a slow steady stream, add 2 to 4 tablespoons olive oil, stirring as you go to emulsify’.

Mixed greens are then tossed in the vinaigrette, before kalamata olives, feta, and cucumber are added.

The dish is then topped with salmon, zucchini, and potatoes.

While Wilde may well have taken inspiration from Ephron when creating her own dressing recipe, her decision to share a page from the author’s book seems to be about far more than simply offering up vinaigrette instructions to the world.

While Heartburn was written as a novel and does not use Ephron’s real name, it is known to be based largely on the writer’s marriage to and split from her journalist ex-husband Carl Bernstein, of Woodward and Bernstein fame – who cheated on her while she was pregnant with their child.

Described as an ‘inspired confection of adultery, revenge, group therapy, and pot roast’, the book tells the story of food writer Rachel (based on Ephron) and her marriage to political journalist Sam (based on Bernstein), who has an affair with a woman named Thelma Rice – who is based on Margaret Jay, the daughter of former British Prime Minister James Callaghan, with whom Bernstein had an illicit romance.

Wilde has repeatedly denied that she was unfaithful to Sudeikis, telling Vanity Fair earlier this year: ‘The complete horses**t idea that I left Jason for Harry is completely inaccurate.’

According to the nanny it was when Sudeikis noticed that Wilde had made a salad to bring to Styles, with something that he referred to as her ‘special dressing,’ that things came to a head.

The former employee said Sudeikis became so upset with the notion of Styles eating her home-made dressing that he got underneath Wilde’s car so that she couldn’t bring the meal to the singer.

Sudeikis and Wilde hit back at their former employee’s allegations in a joint statement, saying: ‘As parents, it is incredibly upsetting to learn that a former nanny of our two young children would choose to make such false and scurrilous accusations about us publicly.’

However, soon after the nanny made the revelations, Twitter went wild with memes and jokes about the ordeal – with many people begging the movie star to share the recipe for the mysterious dressing.

‘Please drop the salad dressing recipe,’ tweeted one person, while another added, ‘I need to know what Olivia Wilde puts in her special salad dressing.’ 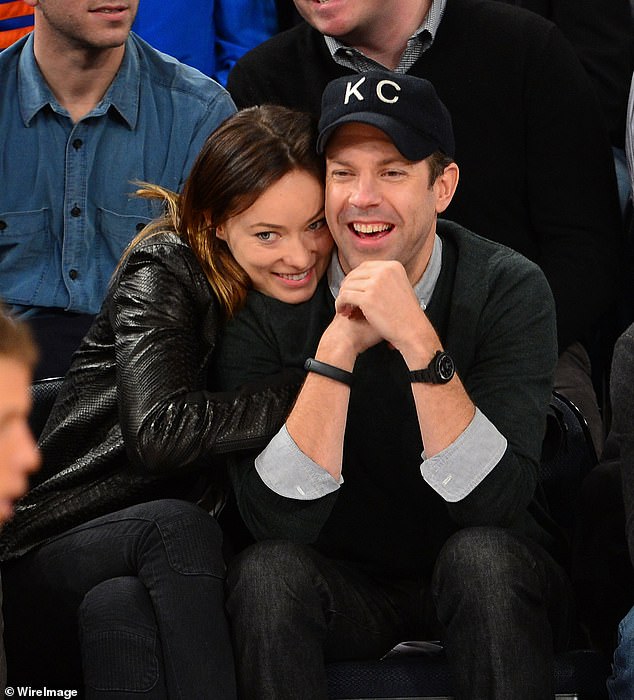 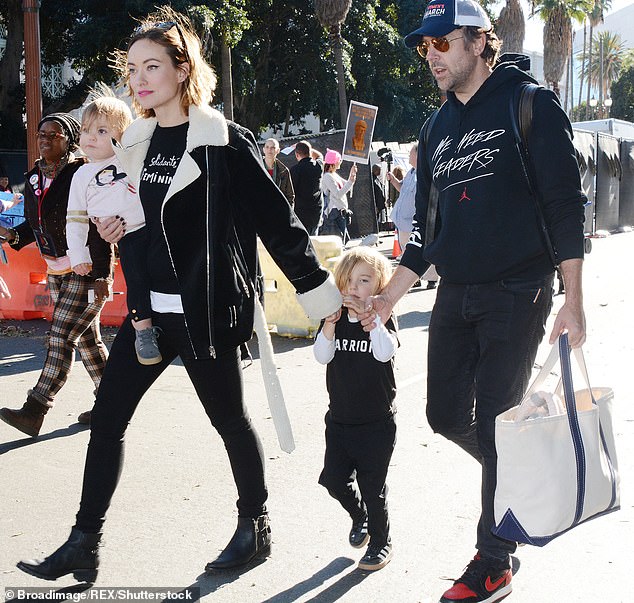 Sudeikis and Wilde (seen with their kids in 2018) officially split in November 2020, and the actress went public with her romance with Styles in January 2021

Someone else posted a GIF that showed Kourtney Kardashian looking unamused while mixing a salad, writing, ‘Olivia Wilde while Jason is under her car.’

A different user shared a GIF of Ashley Tisdale carrying a plate of food with a big smile on her face, which they captioned, ‘Olivia Wilde leaving the house with her “special dressing” dressed salad.’

‘Jason Sudeikis’ worst nightmares,’ read another tweet, alongside a snap of a salad and a snap of Styles.

‘Harry Styles watching Jason Sudeikis and Olivia Wilde drama,’ said someone else, while sharing a throwback snap of Styles eating a salad.

Another Twitter user posted a GIF that showed Meg Griffin from the series Family Guy, jumping in front of a car.

‘Jason Sudeikis in front of Olivia Wilde’s car,’ they added.

A different user even joked that they were going to dress as Wilde holding a salad for Halloween, while someone else said they were ‘losing their mind’ over the ‘mental image’ of the drama.

Sudeikis and Wilde began dating in 2011 and became engaged in 2013; she and Styles first confirmed that they were dating when photographers caught them holding hands in January 2021 at his manager’s wedding, after the pair fell in love on the set of her movie Don’t Worry Darling in late 2020. 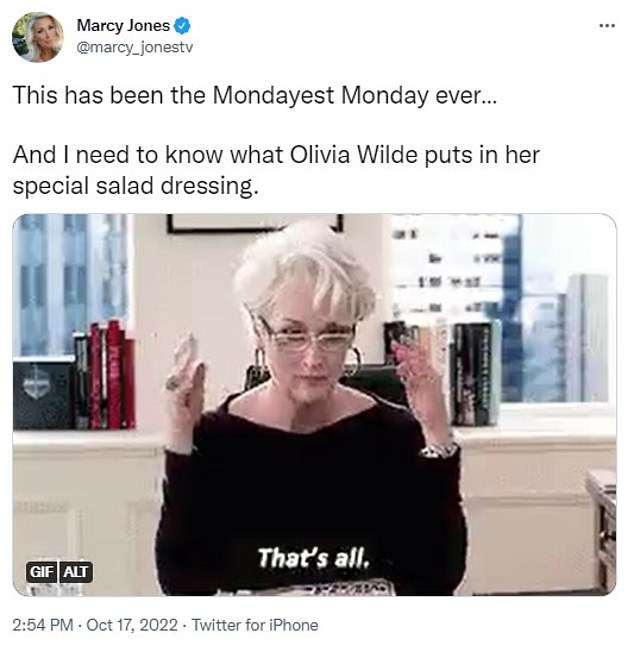 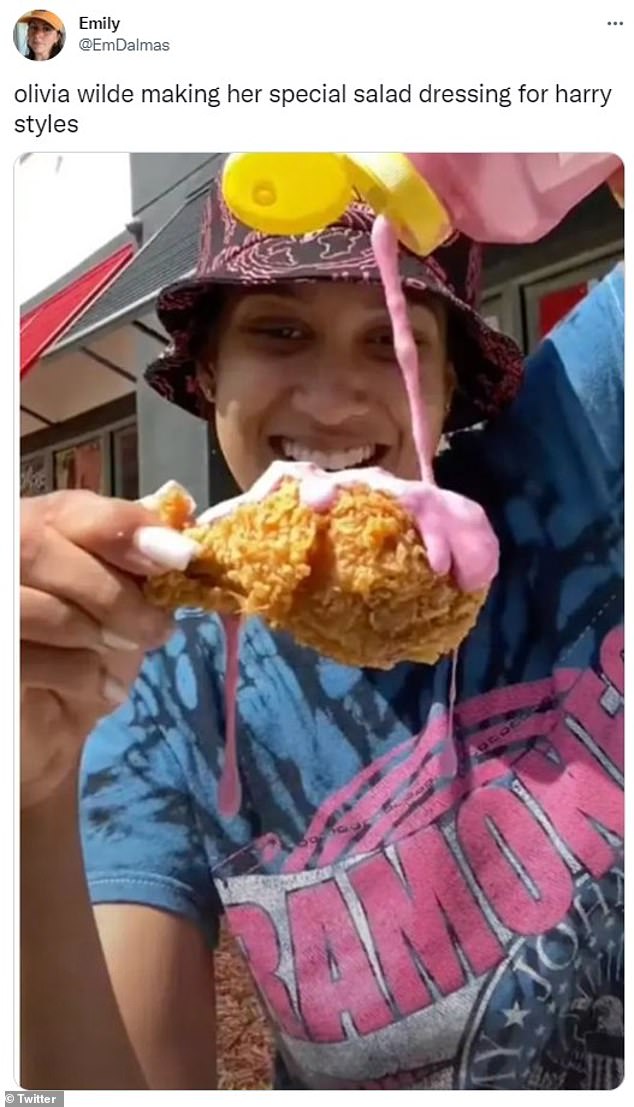 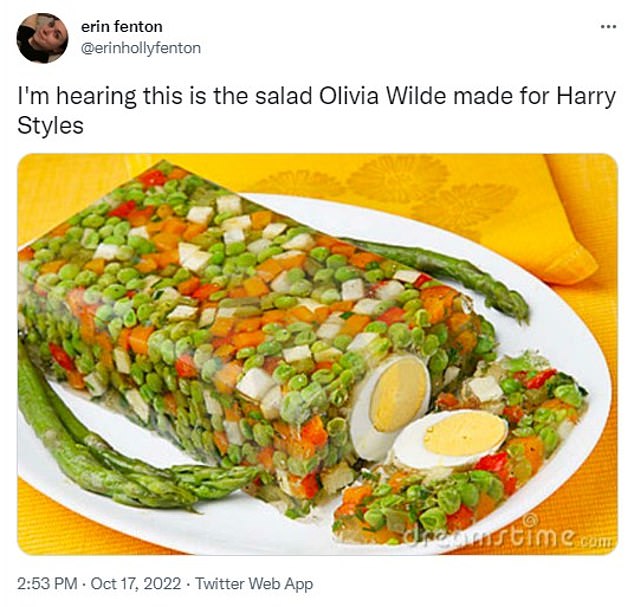 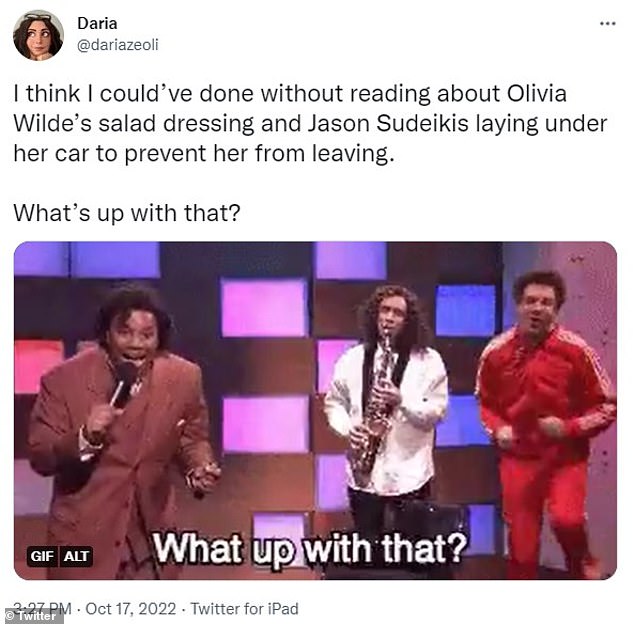 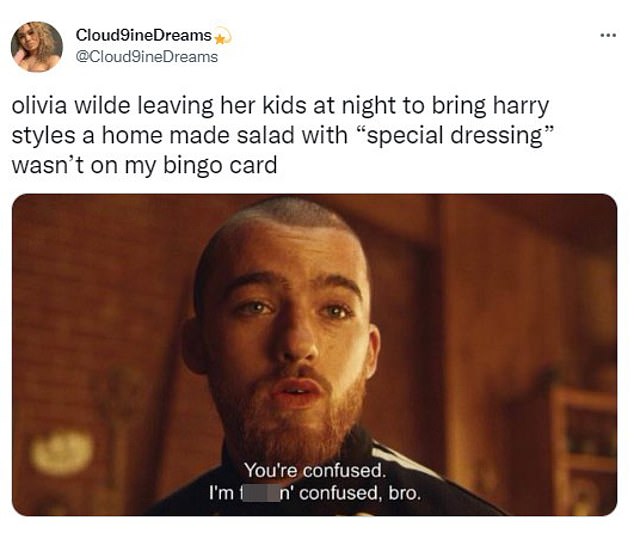 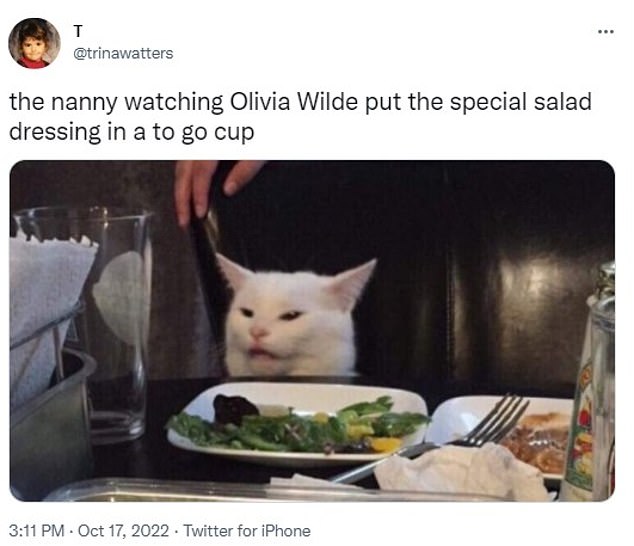 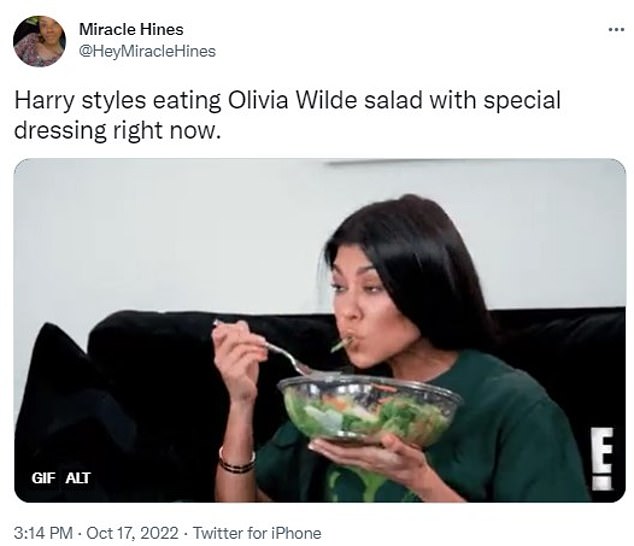 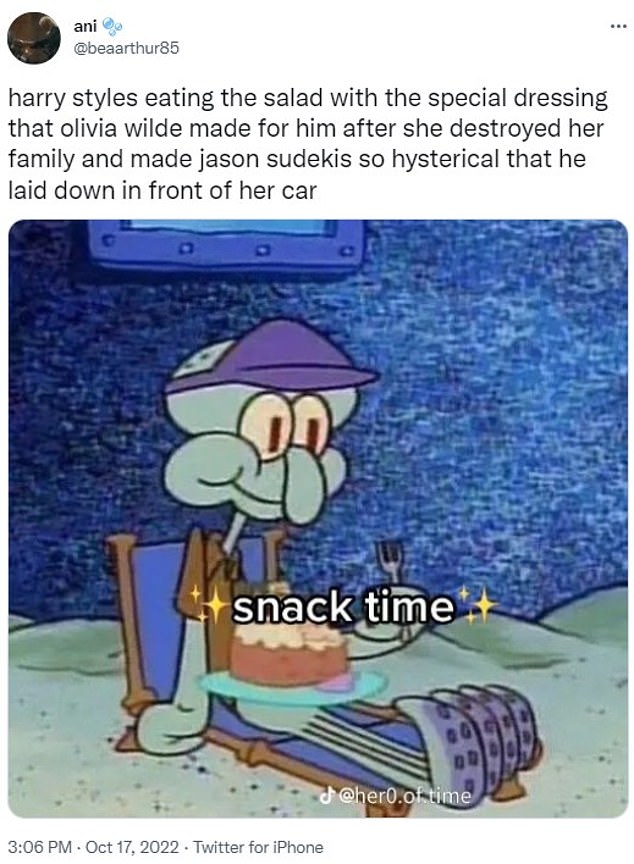 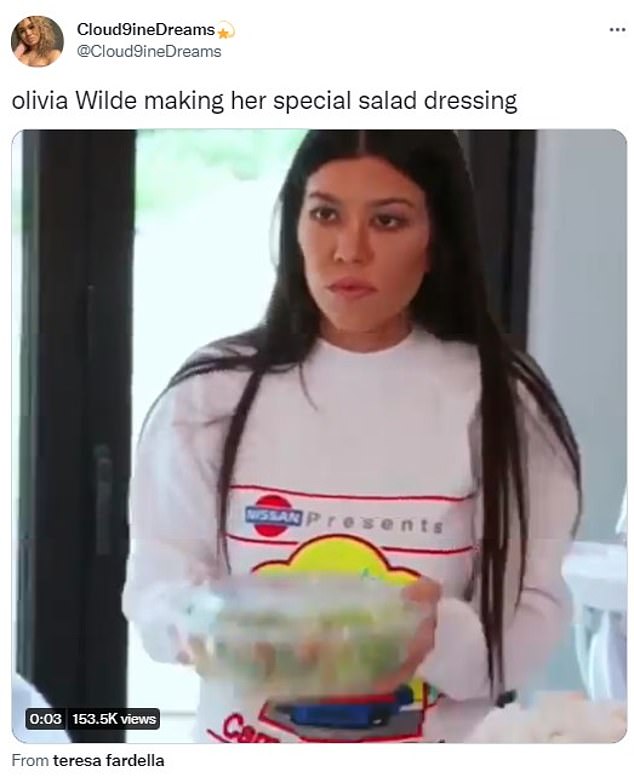 One person posted a GIF that showed Kourtney Kardashian looking unamused while mixing a salad, writing, ‘Olivia Wilde while Jason is under her car’ 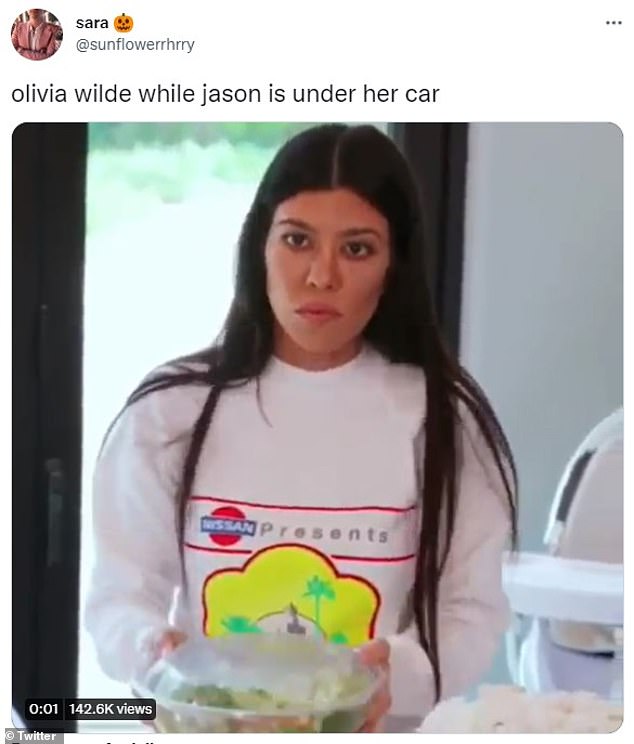 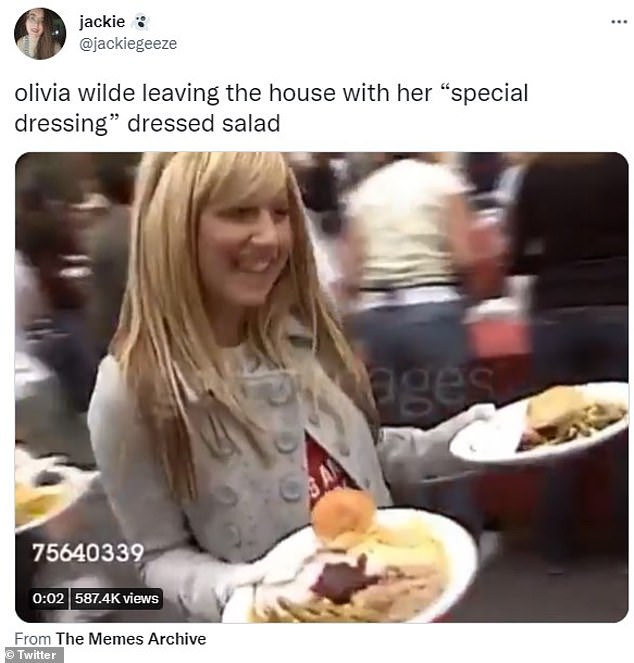 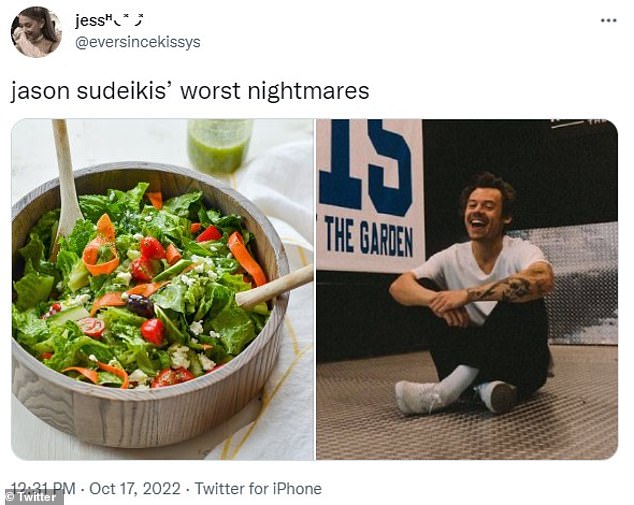 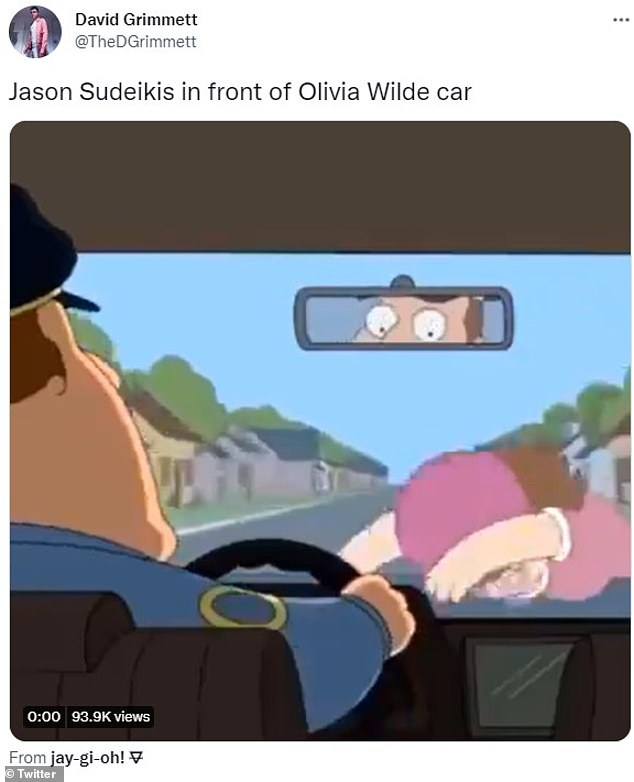 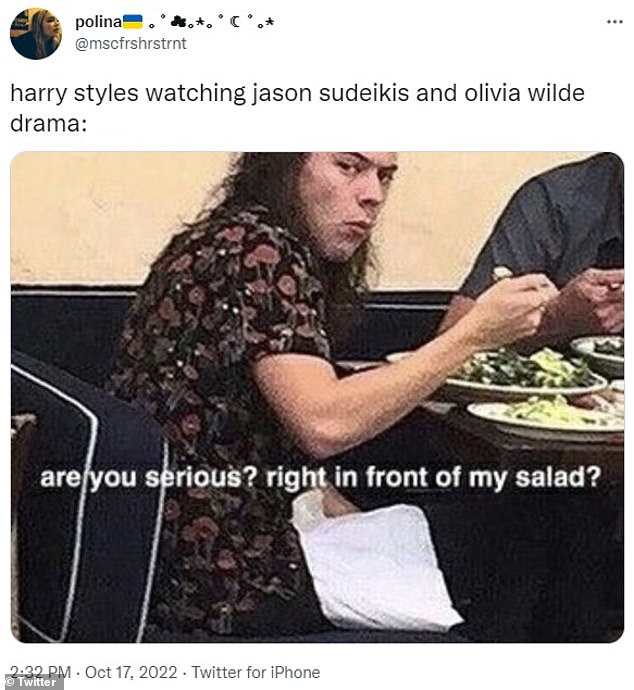 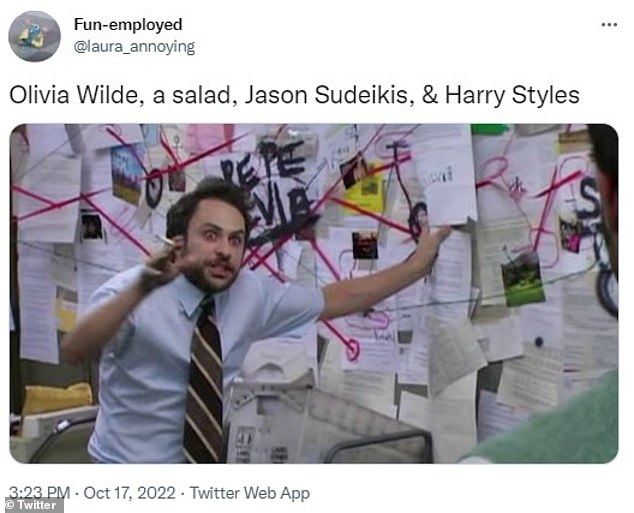 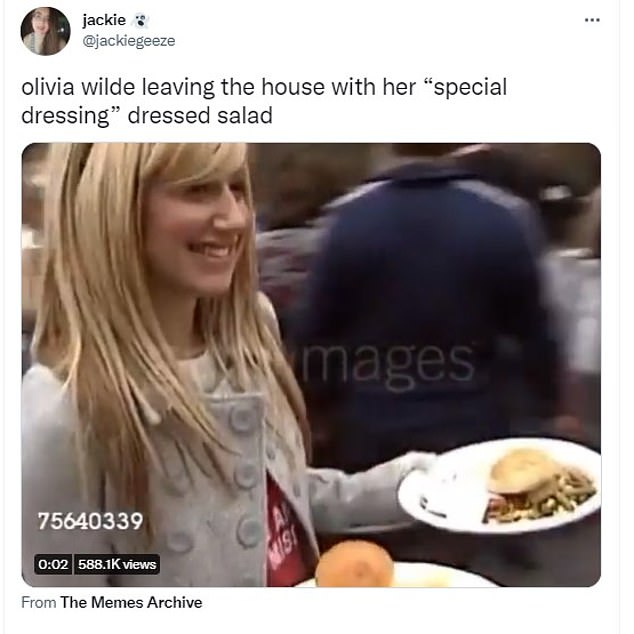 A different user shared a GIF of Ashley Tisdale carrying a plate of food with a smile on her face, which they captioned, ‘Olivia leaving the house with her “special dressing” dressed salad’ 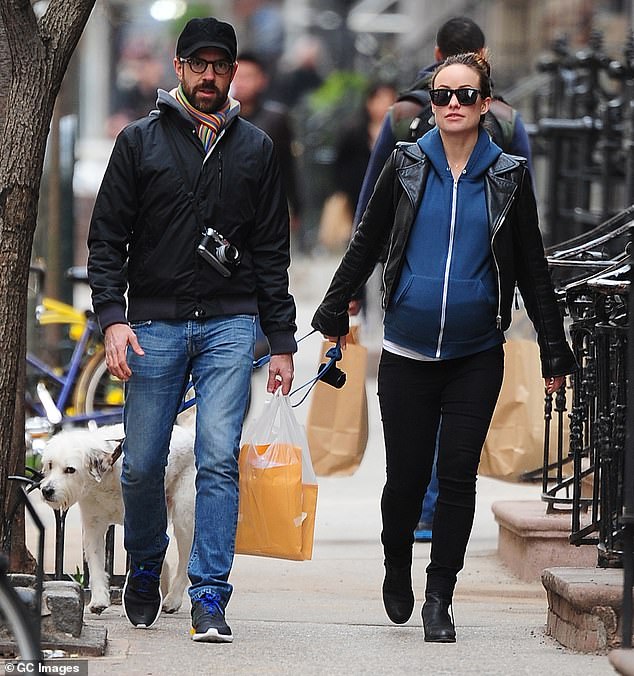 Sudeikis and Wilde (seen in 2014) began dating in 2011; Wilde has insisted that they parted ways in early 2020, and her affair with former boybander Styles started months later 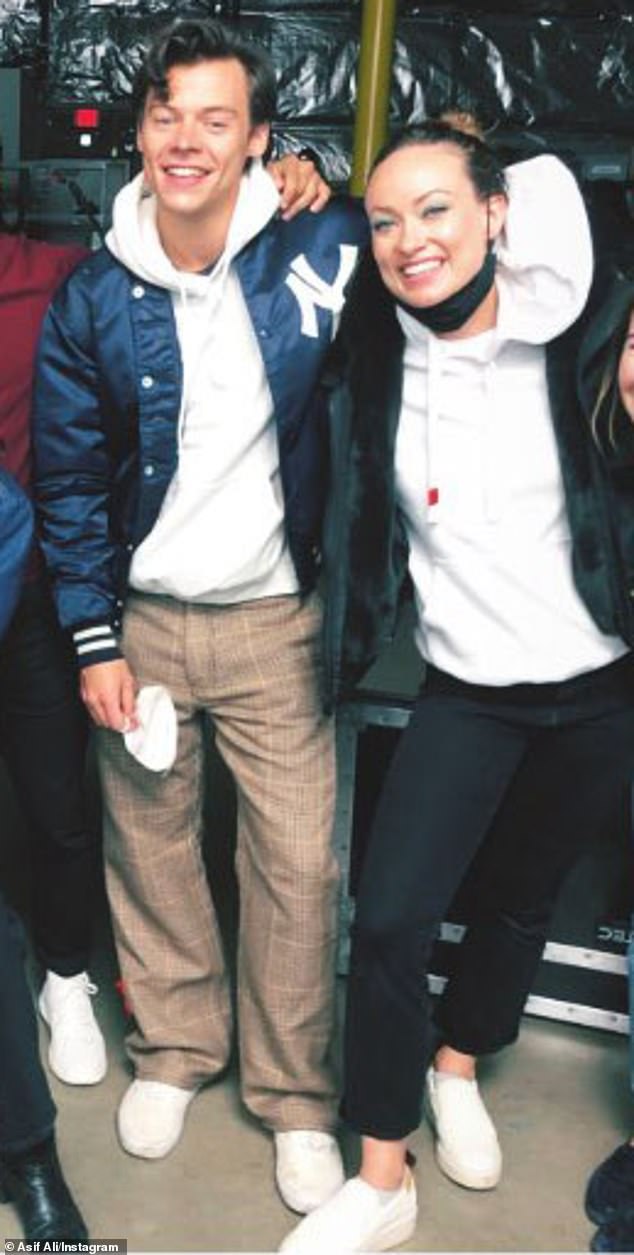 On November 15, the nanny said Sudeikis became infuriated after he noticed her preparing a salad for Styles with her ‘special dressing.’ Wilde and Styles are seen together