On the move: Liberals want number plates to say Victoria is ‘Open for Business’

Victorian number plates would include the slogan “Open for Business” under an opposition economic recovery plan aimed at boosting the state’s reputation.

According to a leaked shadow cabinet document, a Matthew Guy-led government would spend potentially tens of thousands of dollars replacing “Victoria – The Education State” with its new tagline. 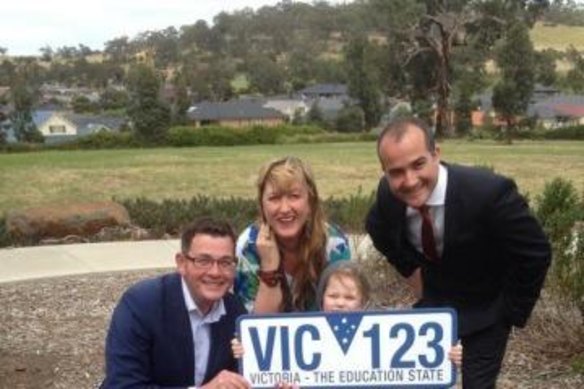 The policy was pitched by shadow treasurer David Davis in recent weeks and fits into a Coalition narrative that portrays Victoria, and especially Melbourne’s CBD, as scarred by the pandemic-induced downturn.

According to the document circulated among senior opposition MPs, the Coalition, which is the underdog at the November poll, would introduce a “new number plate for Victoria to advertise that the state is ‘open for business’.”

“Final approval is sought for the below listed portfolio policies to form part of the Victorian Liberals and Nationals 2022 election platform,” the document states.

The “New Start for Victoria and Kick-Start the Victorian economy” plan would:

Treasurer Tim Pallas rubbished the plan and claimed the Coalition would “declare every state asset ‘open for business’ and put them up for sale to the highest private bidder”.

“Unemployment across Victoria – especially in our regions – has halved since we came to government,” Pallas said. “If Matthew Guy’s Liberals want to see where opportunities for Victorians have slowed, they should look at their own record.”

One Liberal MP, who requested anonymity to criticise the party, said the economic plan illustrated the party’s inability to develop well-researched policies that were popular and detailed.

“The economy’s actually going OK other than inflation. We should be focussed on a serious economic plan and talking about debt, but we’re worried about number plates,” the MP said.

Contacted about the policy, Liberal Party deputy leader David Southwick said “after eight years of Daniel Andrews, Victoria has gone from the most liveable to most leaveable state in the nation”.

“Under the Liberals and Nationals, Victoria will be open for business once again,” he said.

In 2015, the newly elected Andrews government replaced the road safety wording with “Victoria – The Education State”, which was criticised by Liberal leader Guy at the time.

In 2001 the Bracks Labor government spent $90,000 hiring an advertising firm to develop the “Victoria – The Place To Be” motto, which replaced the Kennett government’s “Victoria – On The Move” slogan.

It’s unclear if the Coalition will announce its intention to change the plate slogan before the November 26 election.

Former Liberal premier Jeff Kennett told The Age the slogan he adopted in 1994 sent a powerful psychological signal about the importance of attracting major events such as the grand prix, and stimulating business investment.

“I know it’s a small thing … but when we adopted the sign ‘Victoria – On The Move’, it sent a signal we are coming out of the rust-bucket,” Kennett said last week.

Other states’ licence plate logos include: “Sunshine State” in Queensland, “Explore The Possibilities” in Tasmania, “Canberra – The Nation’s Capital” in the ACT and “N.T. Outback Australia” in the Northern Territory. NSW, South Australia and Western Australia do not have slogans on number plates.