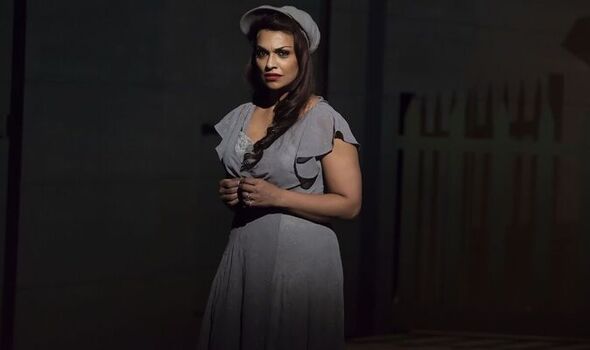 The singer was speaking after English National Opera’s annual £12.6million Arts Council England grant was slashed. She rejected claims that large scale opera was not proving popular enough, saying: “Do we need to sell as many tickets as the O2 to be recognised?

“Is the Arts Council saying you are on the chopping block if you don’t?”

The 43-year-old is headlining major London productions of La Boheme, It’s A Wonderful Life and an immersive Handel’s Messiah this winter at the Royal Opera House, Coliseum and Theatre Royal.

Last week she joined Stuart Murphy, CEO of the ENO, star Lesley Garrett and other supporters including Melvyn Bragg at the House of Commons for crisis talks. She said: “We were there to encourage MPs to ask tougher questions of the Arts Council. We don’t want the Government to feel like, ‘Yeah, yeah, there will be an outcry but eventually, everyone will die down and move on’.

“We want MPs to make an urgent plea to reconsider or to find another solution, or to buy some time to find one.

“We need the Government to recognise opera’s value. You can’t just dig down every single level until all you have left is reality TV. We need fantastic cultural experiences. The ENO is one of the central beating hearts of London.”

Arts Council England’s director of music, Claire Mera-Nelson, justified the cuts by saying there had been “almost no growth” in audience demand for traditionally staged large-scale opera.

But Danielle said: “Should we declare war on everything that isn’t mainstream enough? Do we cut out the blood that feeds our souls and nurtures society simply because it is not loved by everybody?

“Does every single person love Strictly Come Dancing or Antiques Roadshow? You can’t say that about anything. So why is it a prerequisite for funding opera? I take issue with that.” The ENO has been offered £17million of investment across three years, conditional on the company leaving its London base after 90 years.

Arts Council England said this was part of its intention to “level up” funding outside London. But Danielle fears “all that lovely young talent” will go abroad.

“It’s like cutting off your nose to spite the face,” she said. “It’s saying, ‘Let’s support more talent across the broader regional UK’, but also saying ‘We’ll cut off the blood supply to the organisations that provide their training ground’.”

The ENO said: “We were shocked by ACE’s announcement that they would be removing our funding and asking us to move out of London, offering only around half our usual budget to do so.

“Not only does this put hundreds of highly trained jobs at risk, but it sends the message that they don’t think anywhere outside London deserves full funding. It also totally disregards our work to make opera accessible, which we’ve been doing for nearly 100 years.

“This is why we’re fighting this funding cut. The work we do matters. Opera isn’t for the elite – it’s for everyone – and we’re determined to keep sharing it with everyone around the UK.”