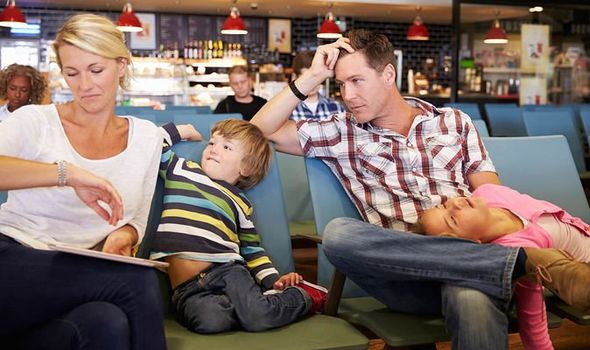 Of those, four in ten put it down to wanting to avoid the panic the ever-changing COVID-19 travel restrictions bring, while 31 percent feared having to quarantine on their return.

A stressed-out 43 percent have lost sleep as a result, and two-fifths confessed to shedding tears about holiday uncertainty, according to the study commissioned by CiiTECH, a cannabis research company behind CBD brand Provacan.

More than three in ten (31 percent) even think it is more daunting than a job interview, while 29 percent think the stress is worse than when they move house or start a new job.

It also emerged the summer holidays are causing increased stress for 63 percent of parents this year.

For those, the prospect of juggling work and childcare through the long school break is causing more worry than previous years, after they have spent an average of 250 days with their kids at home this year.

Other concerns for parents include finding activities for their kids to do (69 percent) alongside the financial implications of the long summer holidays (64 percent) and further periods of isolation (66 percent).

There’s no doubt about it, this summer has been stressful for Brits

As a result, the average parent would like to shorten the summer break to just over two-and-a-half weeks.

In fact, more than half of parents with school-aged children would cancel the summer holidays altogether if they had the chance.

CiiTECH CEO Clifton Flack said: “There’s no doubt about it, this summer has been stressful for Brits.

“Additional factors to consider when booking a holiday, a year on and off home-schooling during the pandemic, isolation, financial pressures, or combining home working with childcare have all played a part.

“We’re passionate about developing products that truly help to return a state of equilibrium during these testing and turbulent times.”

Due to last-minute changes in plans as a result of the ever-changing COVID-19 rules, 21 percent Brits claim they are having to “pivot” and find more local activities to keep themselves entertained.

However, a fifth claim that a lot of things are fully booked and so they’re left with little to do.

This has resulted in Brits suffering from GOSH – Guilt of the Summer Holidays – as their valuable holiday time is going to waste.

In particular, summer holiday guilt is accentuated for parents with school-aged children, with almost half (49 percent) saying their main source of guilt during summer holidays comes from their families.

A further 48 percent are left feeling bad when they see images of other parents on day trips with their kids on social media sites such as Instagram.

School WhatsApp groups are also blamed for making 39 percent of the parents polled, via OnePoll, feel a sense of anguish.