A Victorian crossbench MP whose support would secure the government’s pandemic bill says more oversight and the ability for Parliament to overturn decisions would probably secure his support, but Labor believes a deal is unlikely to be finalised by Friday.

Clifford Hayes, from Sustainable Australia, confirmed the Andrews government had been receptive during last-minute negotiations to ensure its bill can pass the upper house before the existing state of emergency expires on December 16. 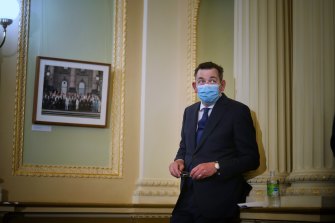 Premier Daniel Andrews at a press conference in parliament on Thursday.Credit:Luis Enrique Ascui

The proposed laws — the Public Health and Wellbeing Amendment (Pandemic Management) Bill 2021 — would replace existing state of emergency powers, empowering the premier and health minister of the day to declare pandemics and enforce health directions.

Under the current system, the state’s chief health officer, who is not elected, has these powers.

Labor had been relying on the support of three friendly crossbench MPs to have its bill pass the upper house with a one-vote majority, but the dramatic re-emergence of ousted former Labor minister Adem Somyurek, who has threatened to return to Parliament to vote down the pandemic powers, forced the government back to seek more support after failing to negotiate with the entire crossbench.

The government will bring on a vote once the support of another MP has been secured — which could be as early as Friday or as late as the last sitting week of the year, in a fortnight — likely with significant concessions.

If the existing powers lapse and no replacement legislation has been passed by that date, the government will be unable to enforce crucial public health guidelines such as quarantine and the vaccine mandates.

Victorian Attorney-General Jaclyn Symes, the leader of the government in the upper house, said negotiations have been “productive” over the last 24 hours and indicated she was open to complying with Mr Hayes’ demands for more oversight and the ability for parliament to overturn decisions.

“He fundamentally acknowledges that we need a framework. He’s suggested some amendments. I think that there’s room to move on what he’s suggesting,” Ms Symes said outside Parliament.

But she said it was unlikely a deal would be struck on Friday to gain the necessary support, and flagged the possibility of extra sitting days being called to ensure the bill passes before the state of emergency expires.

A government source had on Thursday said Labor was hopeful of reaching a deal in late-night negotiations as soon as Friday.

Mr Hayes said his impression was that greater oversight was “definitely on the table” and he was expecting negotiations with the government to continue today.

“I want to see that the provisions are disallowable by either house of parliament, that’s the main one,” he said outside parliament on Friday morning.

“An oversight committee that recommends such things would be useful too, but it can’t be a government-controlled one.”