Australia could potentially get more doses of the Pfizer vaccine as their production ramps up across the world, the company says. 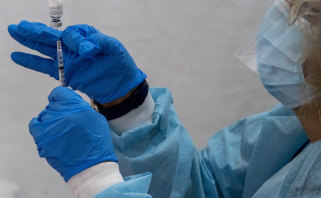 Pfizer is open to providing more doses to Australia, a Senate committee has heard.Credit:AP

“The allocation to Australia is 10 million doses. As Pfizer is now scaling up and looking to produce far more than was originally expected, we expect to be in future discussions about the ability to increase that [allocation],” she said.

Ms Graham said those discussions have not yet begun, but the company anticipates they will begin talks with the government about increasing the number of vaccine units once the first doses start arriving in Australia.

The public hearing comes as the start of Australia’s COVID-19 vaccination program hangs under a cloud, as controls in the European Union risk delaying the delivery of both the Pfizer and imported AstraZeneca vaccines.

During the hearing, representatives from Pfizer and AstraZeneca reaffirmed the companies’ commitment to delivering initial doses to Australia by the end of February or start of March.

AstraZeneca’s market access director Alice Morgan said the initial 1.2 million international doses were on track to arrive in Australia by early March, but that could change.

“That’s still our current plan, but I would acknowledge it is a fluid situation and there are factors that can be outside of our control,” she said.

Ms Morgan stressed the number of doses coming into Australia from Europe was very small, and the 50 million doses being manufactured by CSL in Melbourne will start being delivered from March.

Pfizer’s medical director of developed Asia Dr Krishan Thiru said at this stage, Pfizer understood the European Union change was a notification rather than an export control.

“Should that happen, we will examine what options are available.”

Both companies were giving evidence at the hearing on Thursday, alongside the Australian Medical Association, Pharmacy Guild of Australia, Therapeutic Goods Administration and the national advisory committee on vaccines.

discussing, More, open, pfizer, to
You may also like:

Emmanuel Acho Will Replace Chris Harrison on ‘The Bachelor: After the Final Rose’

Golden Globe predictions: Who we expect to win in 2021

Molly has a meltdown after her parents take her phone away