People have always relied on seabirds. Sailors followed them to find safe harbour, their flocks revealed where fish were swarming and seafarers used them to gauge when the weather was safe to set forth on a journey.

Now seabirds are urgently sending us a message about the health of Australia’s oceans – but we’re not listening, says marine biologist Dr Jenn Lavers, from the Institute of Marine and Antarctic Studies at the University of Tasmania. 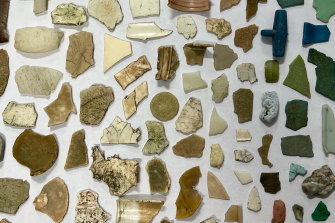 These pieces of plastic were removed from a young shearwater’s gut by Adrift Lab researchers.Credit:Jenn Lavers/Adrift Lab

Seabirds are what is known as a “sentinel species” – one that can help humans diagnose how environments are coping because changes can be monitored through their demography, diet and foraging behaviour.

Every year for the past 15 years, Lavers and a group of young scientists and researchers from the university have travelled to Lord Howe Island, approximately 700 kilometres north-east of Sydney and south-east of Brisbane, in April or May to survey the health of young flesh-footed shearwaters and wedge-tailed shearwaters and discover how much plastic they have eaten. 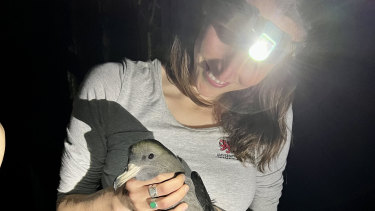 This is one of the longest-running plastic ingestion monitoring programs in the world and its co-ordinated by Adrift Lab – a group of researchers that study all things adrift in the ocean, including plastic, chemicals and wildlife. Plastic pollution in the ocean is a global environmental concern and seabirds are particularly vulnerable when they ingest floating plastic and suffer from starvation.

“Seabirds are our eyes and ears – they can tell us what’s happening out there in the big blue, which is a difficult and expensive place for scientists to travel and work,” says Lavers. The young birds on Lord Howe Island are about 80 days old and unafraid of humans. Scientists can pick them up with their bare hands. 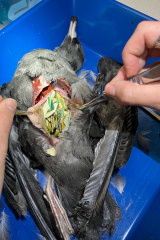 This year the researchers caught, tagged and released about 40 live shearwaters before the birds made their epic 7000-kilometre migration to the Sea of Japan. Some were fitted with a solar-powered GPS, and they can be followed in real time. Researchers also combed beaches for dead shearwaters, which they dissected to examine the type and quantity of plastic inside their bodies.

What they found was shocking: in the 100 dead birds dissected this year, only four hadn’t swallowed any plastic. One bird had ingested more than 200 pieces of plastic, which is still not a record. Another had “only” eaten 125 pieces, but they were large, sharp fragments that weighed 35 grams – about 8 per cent of the bird’s body mass. It’s rare for the plastic to be intact enough to carry a label, but when it does, it often reveals an Australian brand.

Adult shearwaters fly over the Tasman Sea between Sydney and Brisbane and skim plastic off the ocean’s surface to bring back to chicks in their burrows on Lord Howe Island. “They feed the chicks via regurgitation, thinking they are bringing them squid, but they are lovingly feeding their chicks to death,” says Lavers.

The study’s 15-year data set shows variability from year to year but on average, the amount of ingested plastic has increased and the health and condition of birds has decreased. The young birds are smaller, have less body fat and in poorer condition, which stacks the odds against them in their long migration.

This year the plastic levels were exceptionally high, but it’s not clear why. Oceanographic conditions could be driving the change, or perhaps prey is scare and birds are desperate and willing to consume things they normally would not eat.

Globally, scientists still don’t understand why certain bird species will eat large amounts of plastic and others not at all. Seabirds have an incredible sense of smell which guides them to fish, and the current theory is that over time plastics develop an algae-rich “biofilm” on the surface that emits the same chemical that is released by schooling fish. This plastic has been in the ocean so long it no longer looks or smells like plastic, and wildlife assume it’s edible.

Lavers’ work takes a heavy emotional toll on her and her young colleagues. Plastics are all she reads, talks, studies and thinks about, she says: “I feel like I live, eat and breathe plastics.” And that makes it difficult to feel hopeful. When single-use plastics or balloons outdoors are banned, as they were in Victoria last year, people expect her to be elated.

But it’s not enough, she says. “We need the pace of positive change to match the pace of negative change of the birds. We as human society have always relied on seabirds as our sentinels. This 15-year data set is telling us what we need to know – plastic is up and their health down. At what point are we going to listen?”