The investigation comes after decades of disagreement about whether heavy industry can coexist with fragile engravings that include some of the earliest depictions of the human face. 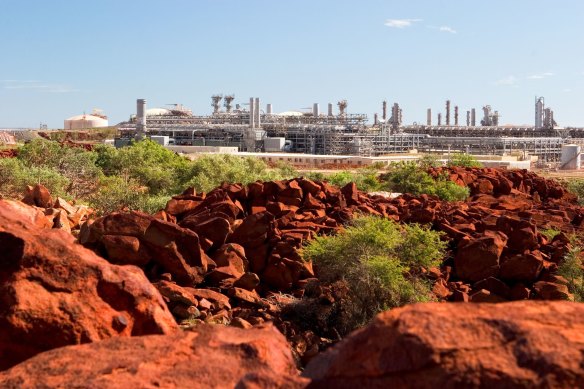 Save our Songlines, an Indigenous group campaigning to protect the 40,000-year-old rock art, applied for a long-term declaration from Plibersek to protect the area they call Murujuga under section 10 of the Aboriginal and Torres Strait Islander Heritage Protection Act.

The applicant, Raelene Cooper, said she welcomed the investigation but in the meantime some rock art was unprotected from the construction of a fertiliser plant after Plibersek in August rejected an application for a stay on construction.

“This is a dangerous and contradictory position from the government that makes no sense and reveals the hypocrisy at the heart of all consultation between traditional custodians and industry on the Burrup,” she said.

“The community will be outraged if this failure from the government to ensure cultural safety allows for another Juukan Gorge while the section 10 assessment is still ongoing.”

A spokeswoman for Plibersek said the consultant would take as long as was needed to prepare the report. Section 10 applications take a minimum of six to nine months to process, according to a government guide to the act.

When Plibersek declined to stop construction of the urea plant by Perth-based private firm Perdaman that would disturb five culturally important sites, she said the Murujuga Aboriginal Corporation had agreed the rock carvings, or petroglyphs, could be moved safely.

However, a June letter from the corporation’s chief, Peter Jeffries, to Plibersek’s department seen by this masthead reveals the “extraordinarily difficult decision for the Circle of Elders” of Murujuga Aboriginal Corporation was made as there was no choice.

“The Circle of Elders have made it clear that their preference is for the petroghlyphs to remain in situ,” the letter said, but Perdaman had repeatedly advised there was no way to redesign its $4.5 billion project to avoid the sites.

Cooper, a former chair of Murujuga Aboriginal Corporation, said too often government ignored Indigenous voices if they were inconvenient for industry.

“This is an unprecedented opportunity to consider all the impacts of every industry on the Burrup on our sacred rock art sites and provide permanent protections in federal laws.”

The Burrup Peninsula is home to Rio Tinto’s iron ore port at Dampier, Woodside’s North West Shelf and Pluto liquified natural gas plants, and ammonia and explosives production by Norwegian company Yara. Woodside is expanding the Pluto LNG plant to process gas from the Scarborough field it is developing.

The ancient art was produced by engraving through a thin coloured layer called a patina on the outside of the rocks that cover much of Murujuga to reveal the different coloured material below.

Whether industrial emissions have or are likely to damage the patina and destroy the artwork is likely to be central to the investigation.

University of WA professor of world rock art Benjamin Smith and six other scientists this year published findings that the evidence suggested the Murujuga engravings were “already actively degraded by industrial pollution”.

While not all scientists in the field agree with Smith, there is a consensus that the acidity of the rock surface is the key risk to the art.

Smith said nitrogen oxide was the pollutant of most concern.

Woodside’s two LNG plants produced 99 per cent of nitrogen oxide emitted on the Burrup Peninsula this century, according to data from the National Pollutant Inventory.

In May, Woodside chief executive Meg O’Neill said the gas producer did not agree with Smith’s findings. 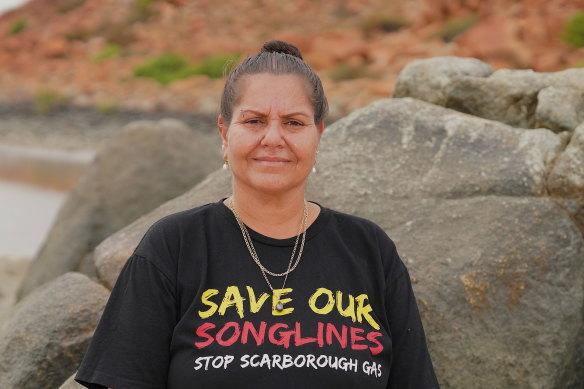 Raelene Cooper, who applied for the independent review is a Mardudhunera woman, one of the five language groups that are the traditional custodians of Murujuga.Credit:Woop Woop Pictures

Before Plibersek could make a legally enforceable declaration to protect the rock art she must consult with the relevant WA minister about whether state legislation provides adequate protection.

In his June letter, Jeffries said the Murujuga Aboriginal Corporation was concerned about state approval for Perdaman to relocate rock art granted under the notorious section 18 of now superseded legislation that allowed Rio Tinto’s destruction of Juukan Gorge.

The state approval “unnecessarily places cultural sites… at high risk” and “is likely to be seen to compromise the proposed World Heritage nomination”.

Jeffries has been asked to comment on the federal government’s appointment of an independent consultant.

Perdaman’s urea plant will be the next large industrial facility on Murujuga if construction goes ahead. The company has secured all the environmental and Indigenous heritage approvals it needs and is understood to be waiting to finalise equity investment and debt financing.

A Perdaman spokeswoman said the section 10 process would not delay the project.

“Perdaman is working closely with investors to be ready for FID in the near future,” she said.