Follow
Home » Lifestyle » Political parties should ‘get off their backsides’ and raise money: Yabsley

One of the Liberal Party’s most experienced fundraisers has called for a halt to company and union donations to political parties to prevent corruption linked to wealthy donors who expect favours in return for millions of dollars in payments.

In a rare public call from someone who worked inside the system, former Liberal Party honorary treasurer Michael Yabsley says the reforms were needed to stamp out threats that are weakening Australian democracy and copying dangers already seen in the United States. 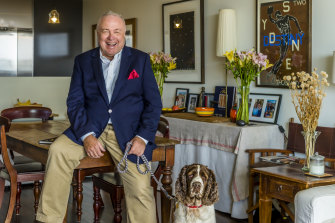 MIchael Yabsley at home with his English springer spaniel, Winston, “as in Churchill”.Credit:Tim Bauer

Mr Yabsley says the changes should allow individual business and union figures to make donations in the same way as any other voters while stopping the “insidious” fundraising exposed in state corruption inquiries.

“Let anyone on the electoral roll donate, capped at a modest amount. It’s the companies, unions and employer entities that should be shut out,” he said.

“For once, political parties would have to get off their backsides to raise the money from the individuals who actually vote, rather than rely on the traditional rivers of gold from entities.

“These reforms require Australian political parties to sever the umbilical cord with their traditional financial backers. Only then will this stain on the integrity of our democracy be addressed.”

The call comes as federal Parliament prepares to debate a bill from Attorney-General Michaelia Cash to set up a Commonwealth integrity commission. Legal experts and former judges say her plan is too weak when political decisions can be swayed by donations.

The NSW Independent Commission Against Corruption (ICAC) is due to hold hearings this week into former premier Gladys Berejiklian and her former partner Daryl Maguire, while the Victorian Independent Broad-based Anti-Corruption Commission (IBAC) is investigating the state division of the Labor Party.

Writing in The Sydney Morning Herald and The Age on Monday, Mr Yabsley describes himself as a “poacher turned gamekeeper” after 45 years in politics including roles as a state minister, treasurer of the NSW Liberals and treasurer of the federal party.

“This is a big deal. On a daily basis, our system of political fundraising insidiously eats away at the credibility of Australia’s otherwise relatively pristine democracy. This virus is edging us closer to the Americanisation of Australian politics,” he writes.

Federal political parties reported combined annual income of $168.1 million in the most recent disclosures from the Australian Electoral Commission but $49.6 million of this was unexplained and labelled “dark money” in an analysis by the Centre for Public Integrity, a non-profit group.

The Centre for Public Integrity, whose members include former judges Anthony Whealy and Stephen Charles, has called for a cap on donations and election spending, a lower threshold for disclosing donations and stronger enforcement against those who keep payments secret.

The Grattan Institute, a public policy organisation, also called for a cap on election spending and wider changes to donations and lobbying in a paper issued in July and called “Gridlock” because it blamed financial influence from vested interests as one factor blocking policy reform.

“While many states have increased controls over donations in recent years, the Commonwealth has not,” wrote the institute’s former director, John Daley.

Mr Yabsley has called for donation reform in the past but now says it should be a priority for national cabinet because it requires cooperation between federal, state and local government.

“We are not talking about bags of laundered cash being handed to MPs or the parties they represent, although jail time has been served by some who crossed that line and got caught,” he said.

“At the heart of political fundraising is a more subtle form of “soft corruption”. It’s more about being seen at the right functions and having the right ministers know “we were prepared to invest in the democratic system”.