Glowing in green! Pregnant Cressida Bonas dons a chic coat to keep her baby bump warm while stepping out in London

Cressida Bonas looked cosy as she donned a chic green coat over her growing baby bump while walking her dog in London this week.

The actress, 33, who dated Prince Harry for two years until 2014, looked chic in the long coat, which she paired with black leggings and white trainers.

Friends confirmed in late July that Cressida is expecting her first child with husband Harry Wentworth-Stanley, who she wed in 2020.

Keeping the rest of her look style, she accessorised the outfit with a classic pair of tortoiseshell shades. 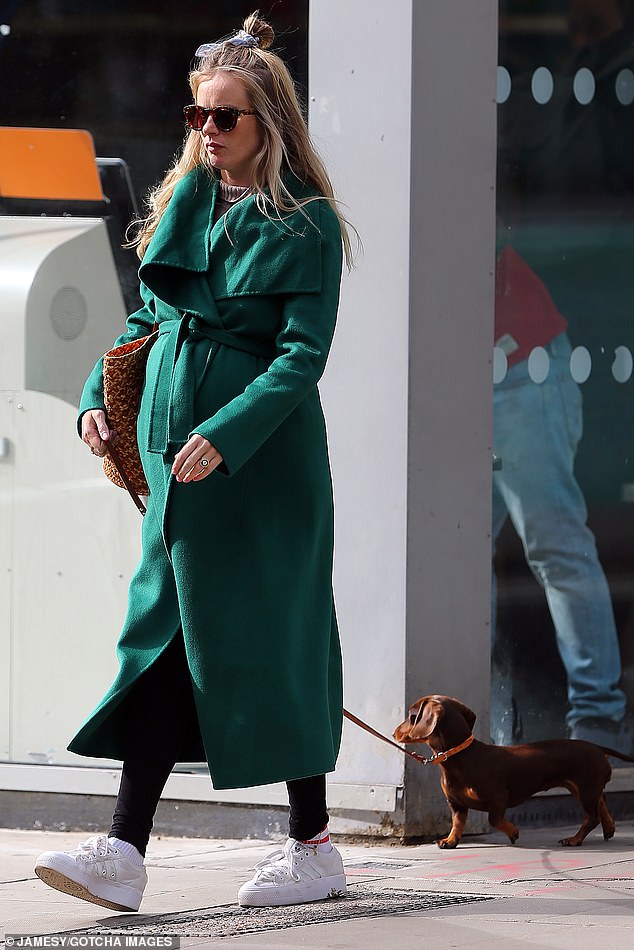 Cressida Bonas, who is expecting a baby with her husband Harry Wentworth-Stanley, was snapped in London this week, walking her dog 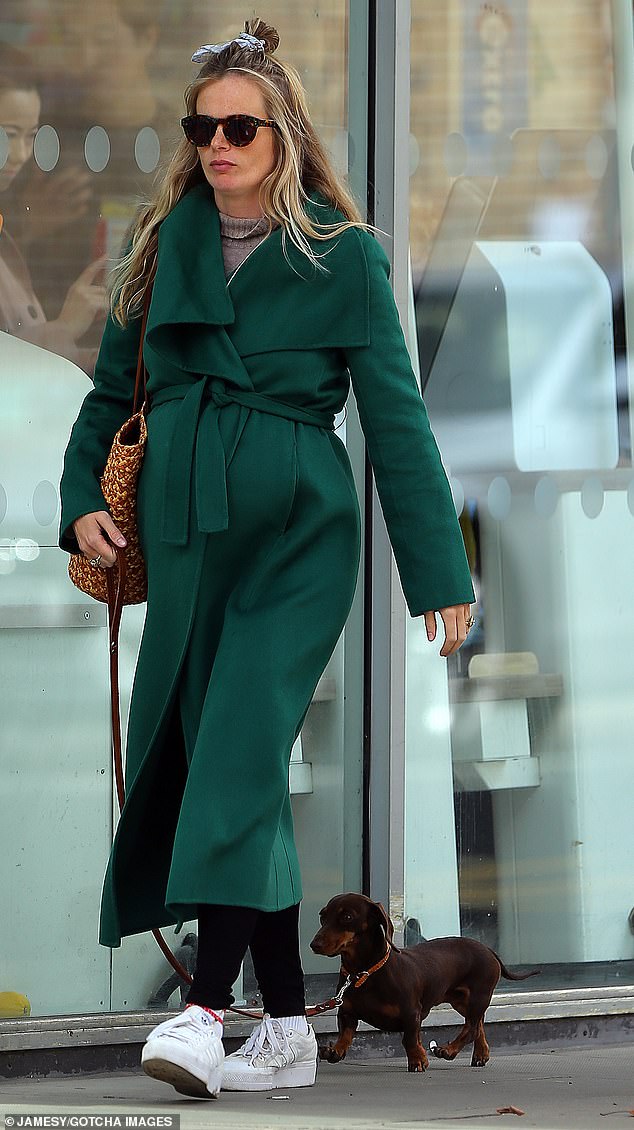 In an effort to stave off the bracing Autumn breeze, Cressida wore a beige knit under her coat, which was wrapped around her growing bump and belted shut.

Her blonde locks were styled into a casual half-up, half-down do, and she appeared make-up free.

Keeping her company as she strode down the street was her beloved dachshund Budgie Bear. 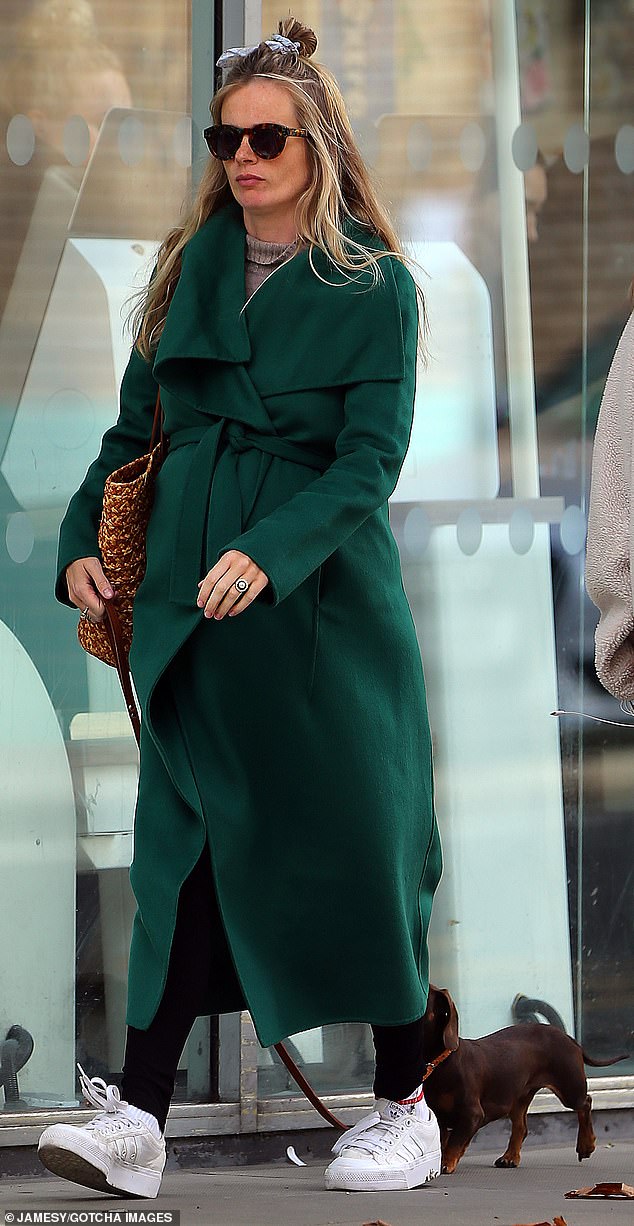 Cressida looked both casual and chic in her green coat, which she paired with black leggings and a pair of white trainers

Meanwhile, Cressida finished her look with a casual half-up, half-down do, putting her blonde tresses into a loose top knot

The couple tied the knot at the exclusive Cowdray Park, in Midhurst, West Sussex, on July 27, 2020, when just 30 guests were allowed at weddings due to Covid-10 restrictions.

Only a handful of photos of the private nuptials emerged at the time, including one of the bride and groom riding off into the sunset on horseback. Cressida later revealed she wore a a £599 Whistles frock she previously sported in a James Arthur music video.

Prince Harry and Cressida split in 2014, reportedly because Cressida was tired of the scrutiny that came with dating a member of the royal family. 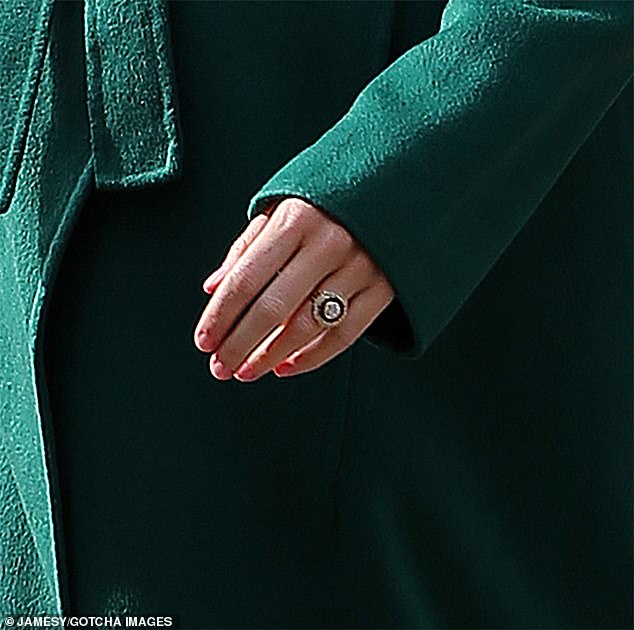 As she walked through London, Cressida wore an elaborate bejewelled ring on her third finger

However the couple remain on good terms and socialise in similar circles, with Princess Eugenie, who introduced the couple, among Cressida’s closest friends.

Cressida even attended her ex-boyfriend’s wedding to Meghan Markle in May 2018.

A family member told MailOnline the just 30 of Cressida and Harry’s closest family and friends attended the ceremony, in keeping with the government’s Covid-19 restrictions.

The OTHER Harry! Who is Cressida Bonas’ well-heeled husband Harry Wentworth-Stanley? 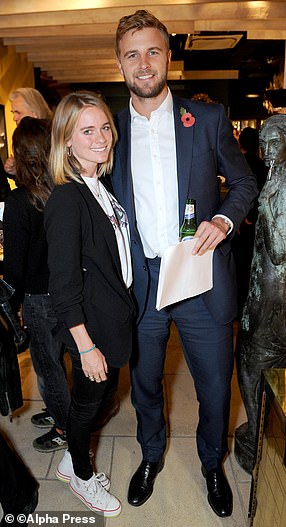 Cressida and Harry, pictured in 2017, dated in university before rekindling their romance after her split from Prince Harry

Before his relationship with his now wife became official, Harry, who is dashingly handsome and 6ft 4in tall, was regarded as one of London’s most eligible bachelors.

He inherited his looks from his mother, Clare, a beauty who remains stunning. There was a brother, James, four years his senior, and younger sister Louisa. When Harry was a child, his mother and father divorced. In 1997, Clare married George, Marquess of Milford Haven, a cousin of the Queen, himself divorced with two children.

The family settled at Great Trippetts, an estate set in 1,000 acres in the Sussex Downs. For a time, life was perfect. Clare stayed on good terms with her former husband, Nick Wentworth-Stanley, who went on to marry Dutch beauty Millie Brenninkmeyer, with whom he had three more children.

Shortly before Christmas 2006, the Marquess and Marchioness and their children went to stay with Nick and his wife in Worcestershire. James, Harry’s elder brother, was recovering from a relatively minor procedure. The operation was a success, but James had become very anxious in the days that followed. 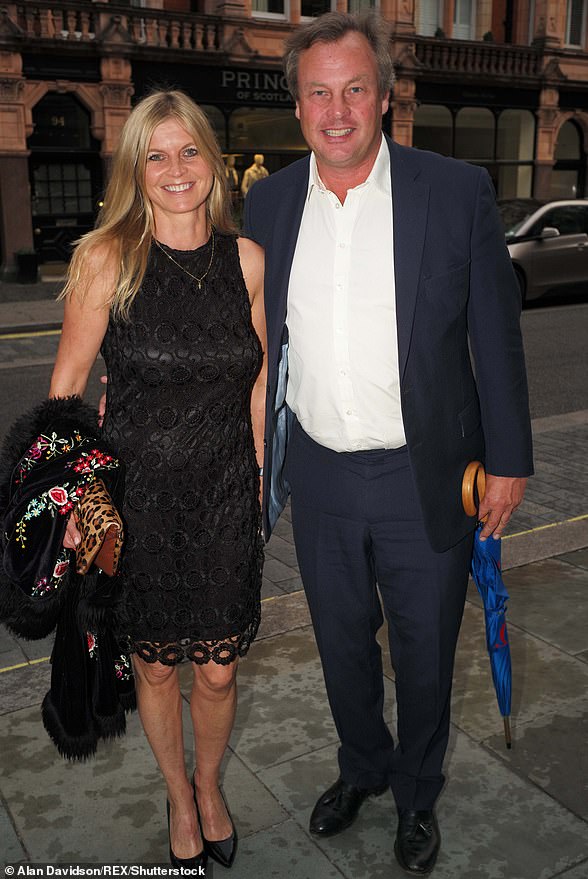 One evening, the family were gathered in the house when they heard a shot fired. They rushed outside to find James lying dead.

The family was shattered by the tragedy.

Clare was floored by her son’s suicide. Touchingly, it was Harry, then 17, who helped her through it. She said in an interview 18 months after James’ death: ‘For the sake of the other children, you have to set an example. If you are strong, it gives them permission to be strong. If you fall to bits, they will. 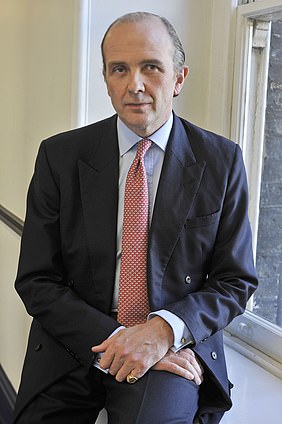 ‘The day after James died, his brother Harry said his biggest fear was that it would destroy me, and that would destroy everything else. It suddenly made me feel how important I was.’

The couple had a serious relationship when they were both students at Leeds University. The couple were known to their crowd — for reasons that aren’t entirely clear — as ‘Water-Cress’. The romance petered out when he took off for a gap year to Argentina in 2011 after graduating.

Friends have previously said Cressida wasn’t quite over Harry when another Harry — Prince Harry himself — began pursuing her in the summer of 2012 and a romance began. There were concerts, rugby matches, skiing trips and cosy nights in at Kensington Palace.

However the couple split in 2014 after three years together.

The following year Harry Wentworth-Stanley and Cressida were photographed on a Valentine’s Day date, although their relationship became public and official in 2017.

In August last year Harry proposed while on a trip to the US and the couple’s smiles in the Instagram announcement told followers all they needed to know about their love for each other. 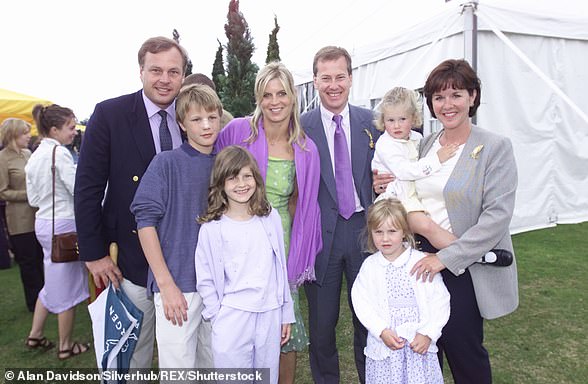 Harry as a young boy with his stepfather, Marquess of Milford Haven (left), sister Louise (front), mother Clare (centre), the Marquess’ brother Lord Ivar Mouthbatten, his children Ella and Alix and then wife Penny (right) at Cowdray Park in 2001