Prince Andrew was not 'worried by inhibitions' after Balmoral memorial

Prince Andrew was not ‘worried by inhibitions’ as he hugged his daughter and gestured to the crowd with ’empathetic praying hands’ after memorial church service in Balmoral, says body language expert

Prince Andrew seemed ‘less worried’ by inhibitions than other senior members of the royal family who gathered in Balmoral today to pay tribute to the Queen, according to a body language expert.

Her Majesty died at the Scottish estate on Thursday, aged 96, with a Buckingham Palace statement saying the monarch passed away ‘peacefully’.

Today, some senior members of the Firm attended a church service at Craithie Kirk, including three of the Queen’s four children – the Princess Royal, the Duke of York and Earl of Wessex – joined the Countess of Wessex, and Anne’s husband Vice Admiral Sir Tim Laurence.

The family spent just under 10 minutes intently reading the tributes and admiring the flowers before they returned inside Balmoral Castle. 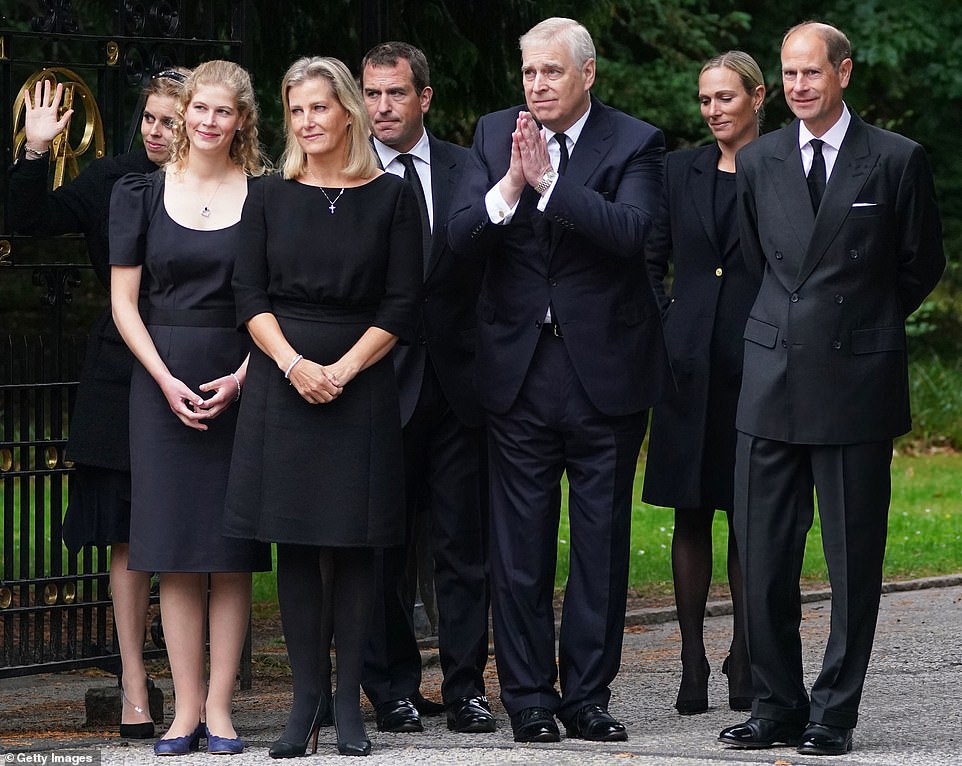 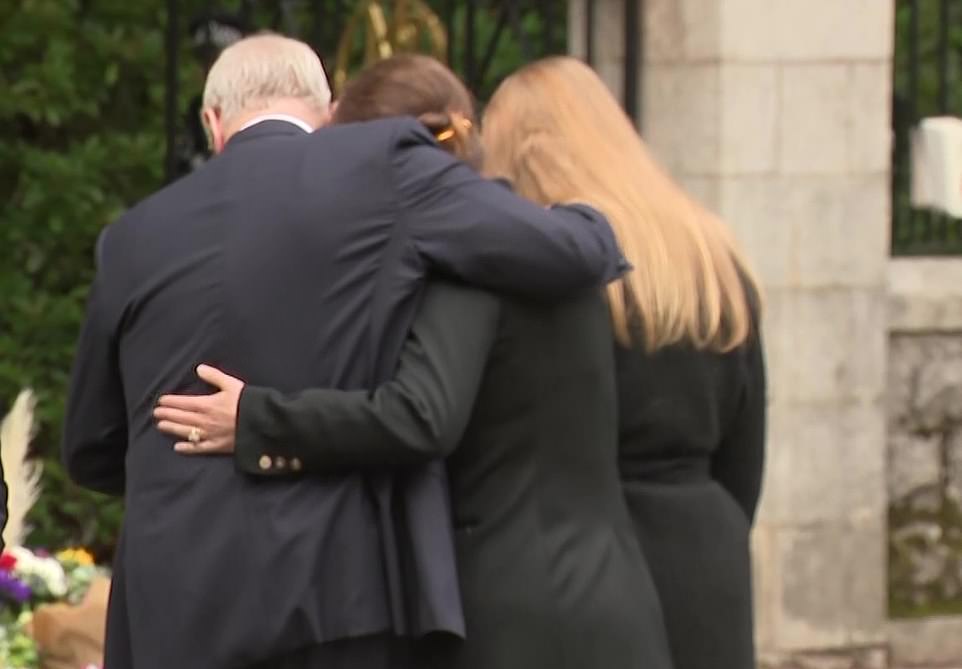 When his daughter Eugenie started weeping, Prince Andrew ‘offered a hug that pulled her close in a display of comfort’, says Judi James 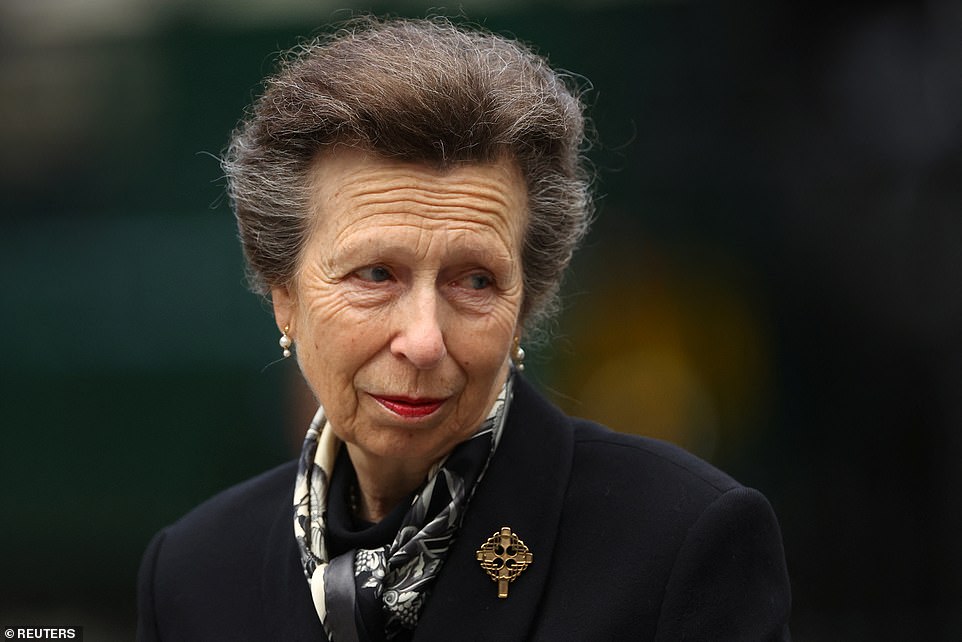 Judi James told FEMAIL that Princess Anne (pictured) was ‘possibly the most poignant figure in terms of her body language, with her diminished posture and her facial expression that appeared to aim at stoicism but which was contorted by sadness’

And according to body language expert Judi James, while the royals ‘are never known for their tactile or emotional displays…they came together today in an open show of mutual support that involved tears, hugging and moments of open tenderness’.

She told FEMAIL: ‘Princess Anne was possibly the most poignant figure in terms of her body language, with her diminished posture and her facial expression that appeared to aim at stoicism but which was contorted by sadness.

‘Her older brother Andrew seemed less worried by any inhibitions, bending to study the messages, wrapping his arm around his eldest daughter and even performing an emphatic ‘praying hands’ gesture when he looked at the crowds.’

Noting that Andrew is the ‘royal we tend to see the least in public’, she described as putting on ‘the most active display of body language here’.

According to Judi: ‘While royals like his daughter Beatrice hailed the crowd with a suppressed, lip-pressed, brave looking smile and one raised hand, and other royals just smiled weakly but warmly in a gesture of shared sympathy, Andrew hunched his shoulders, steepled his brows and raised and pressed his hands together in what looked like a praying gesture of thanks. 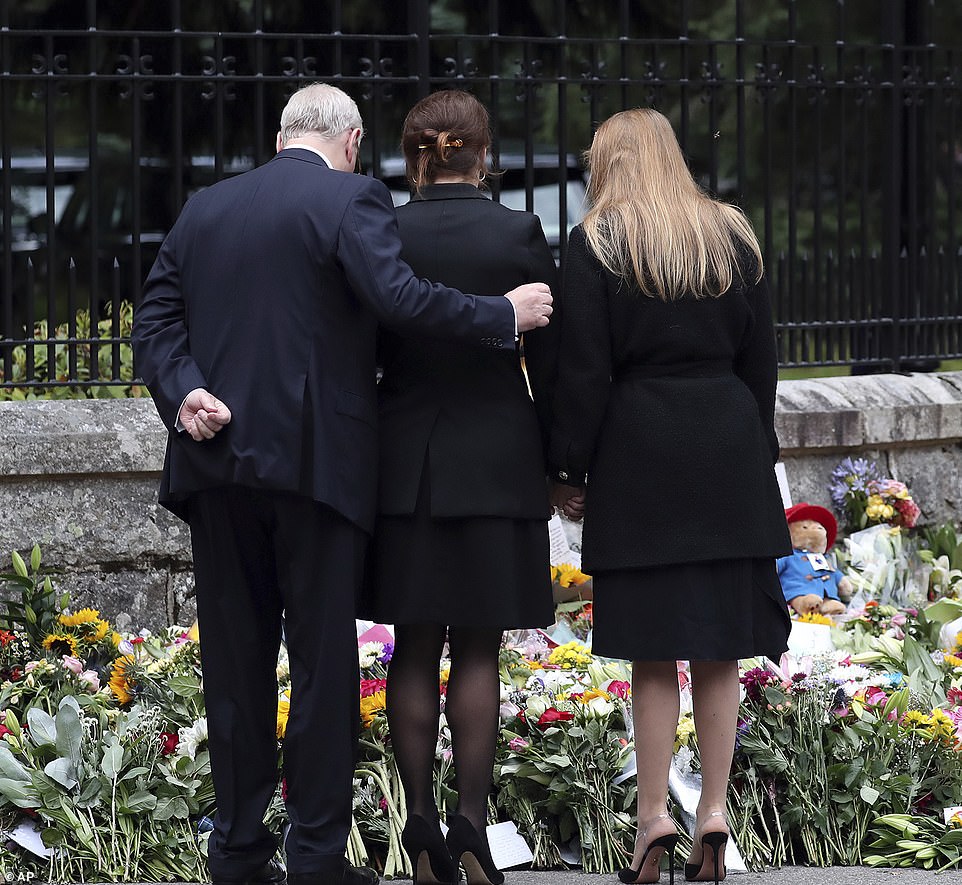 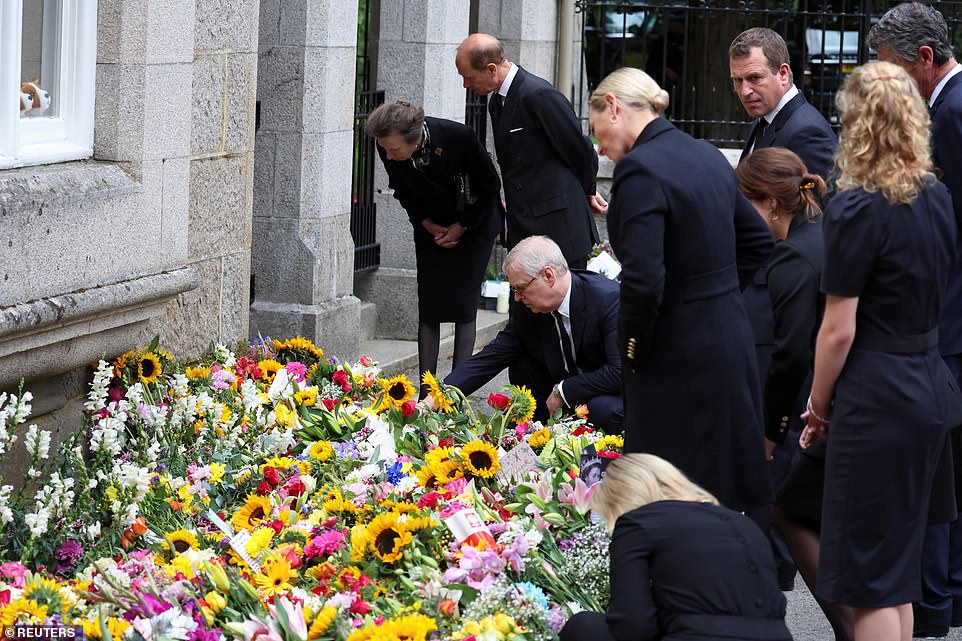 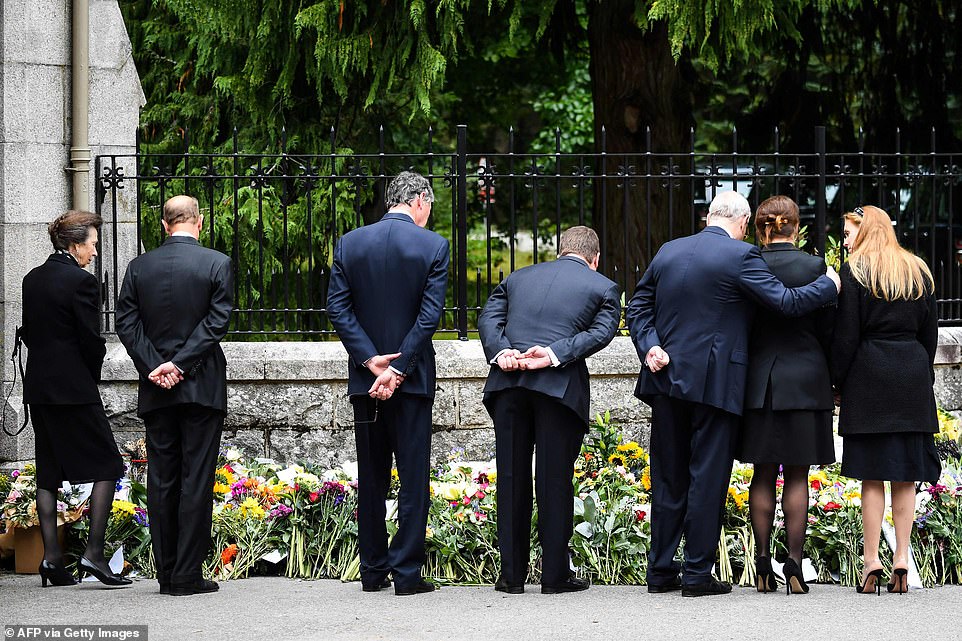 From right to left: Prince Andrew, Duke of York stands with his daughters Princess Eugenie of York and Princess Beatrice of York, along with Princess Anne, Princess Royal, Prince Edward, Earl of Wessex, Vice Admiral Timothy Laurence and Peter Phillips, as they look at the flowers placed outside Balmoral Castle

‘He chatted to the crowds and he seemed to chat a lot to the other royals. He walked with arm spread around Sophie’s back and when his other daughter Eugenie was weeping at the sight of the messages it was Andrew offering a hug that pulled her close in a display of comfort.’

Judi added that sisters Eugenie and Beatrice ‘clung together, holding hands’, with Eugenie weeping openly, just as her sister had during her grandfather’s memorial. 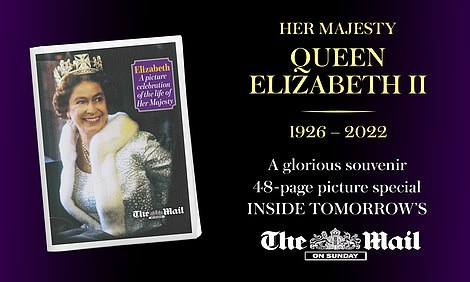 She said: ‘The mutual comfort-giving also entailed Eugenie hugging Lady Louise and we can see the two young women standing with their heads tilted together in a display of mutual unity and support.

‘Sophie is often seen as the nurturing royal and with her arms spread out wide she seemed to embrace a large number of the Firm in the kind of maternal, caring gesture they must need now their mother, grandmother and great-grandmother has gone.’

Senior palace officials have revealed that Her Majesty’s oak coffin, which is lying in the Ballroom at Balmoral Castle, will be taken by road to the Palace of Holyroodhouse in Edinburgh on Sunday September 11, on a six-hour journey by hearse.

The Queen will then lie in state for ‘four clear days’ in Westminster Hall from Wednesday September 14 before the state funeral. 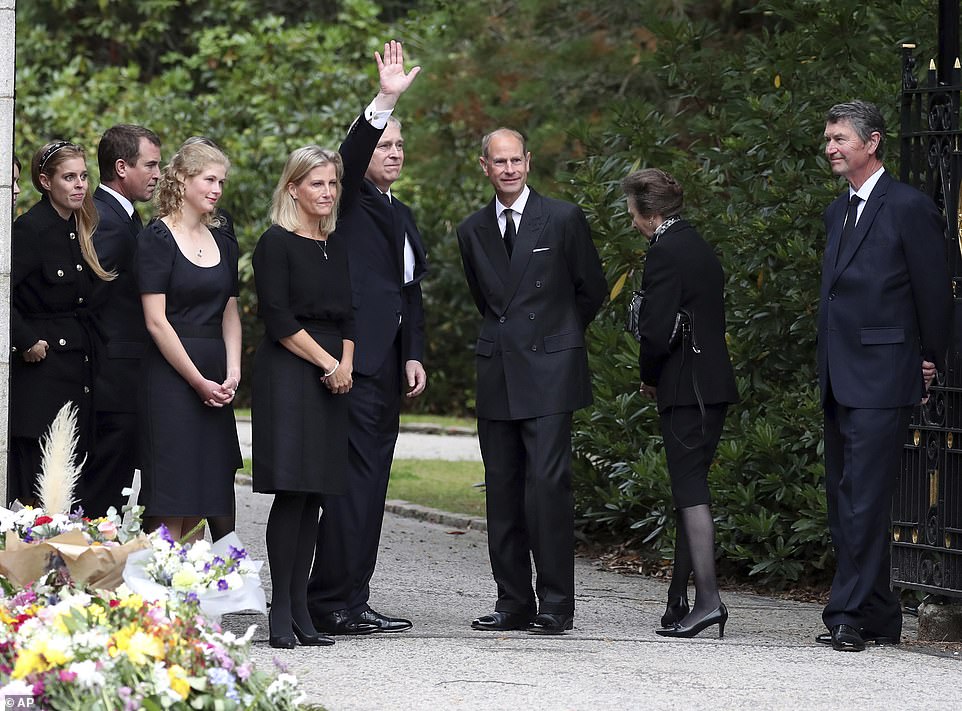 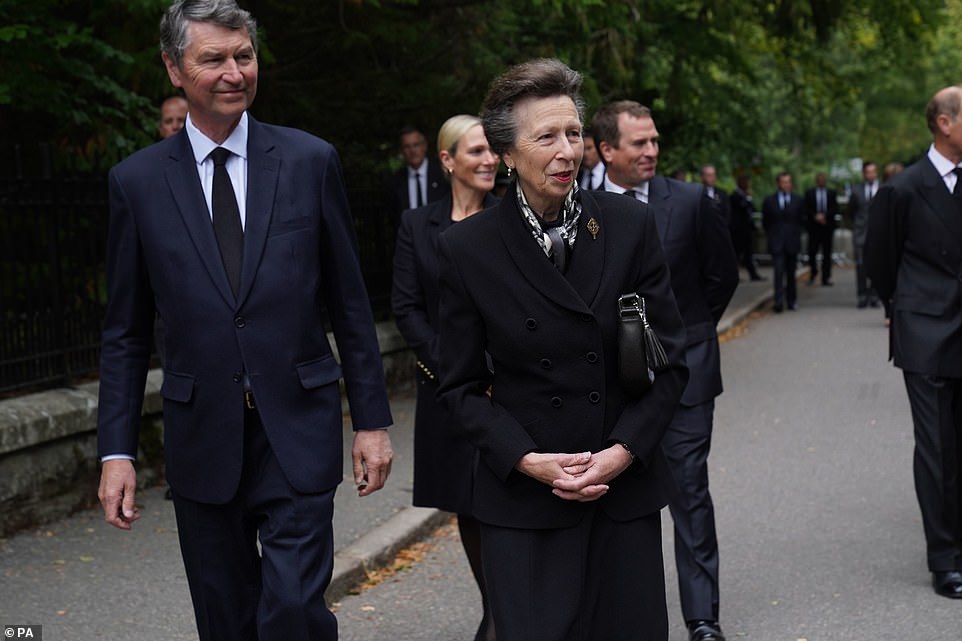 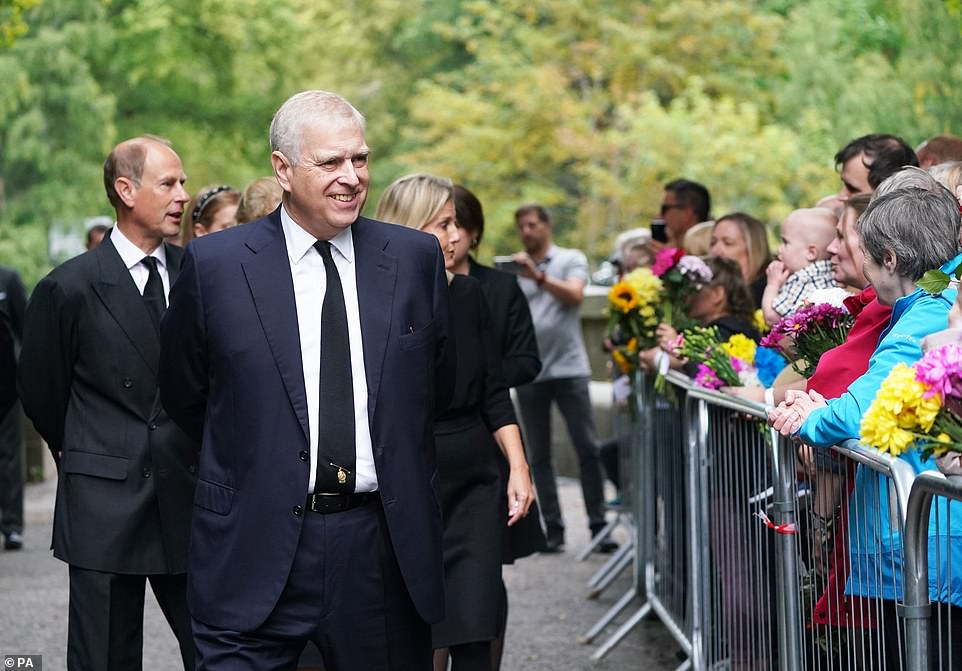 Thousands of people will be able to file past to see the late monarch’s coffin – and further details of how the public can attend will be announced in the coming days.

A spokesman for the King said the monarch’s main focus will be leading the royal family and nation in mourning over the coming days.

‘Whilst, in the next few days, the King will carry out all the necessary state duties, his main focus will be leading the Royal Family, the nation, the Realms and the Commonwealth in mourning Her Majesty The Queen.

‘This will include meeting members of the public, to share in their grief,’ the spokesman said.