Princess Leonor of Spain is poised to be queen

She is just 16 years old, but Princess Leonor of Spain is already preparing for the day she becomes queen.

The heir to the Spanish throne was the picture of poise as she joined her parents King Felipe and Queen Letizia, and sister Princess Sofia, 15, at an awards ceremony in Barcelona last night.

It is the latest in a string of engagements by the schoolgirl princess as she continues to build up her confidence in preparation for her future on the throne.

Leonor, who is understood to speak four languages including Mandarin, juggles her life as a young princess with her work as a student at Welsh boarding school UWC Atlantic College, dubbed ‘Hippie Hogwarts’ thanks to its progressive approach to education and picturesque castle setting.

During the school holidays, Leonor returns home to Spain where she carries out royal duties. She has carried out a number of solo engagements, as well as ones undertaken alongside her parents and beloved sister. 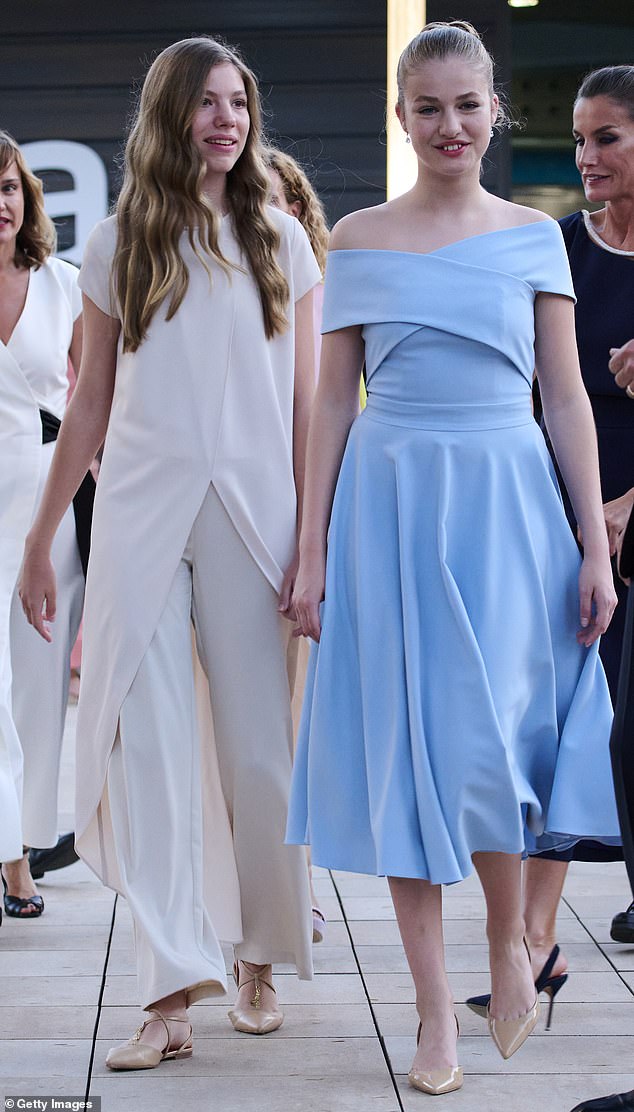 Future queen: Princess Leonor of Spain, 16, right, was the picture of poise as she joined her parents King Felipe and Queen Letizia, and sister Princess Sofia, 15, pictured left, at an awards ceremony in Barcelona last night 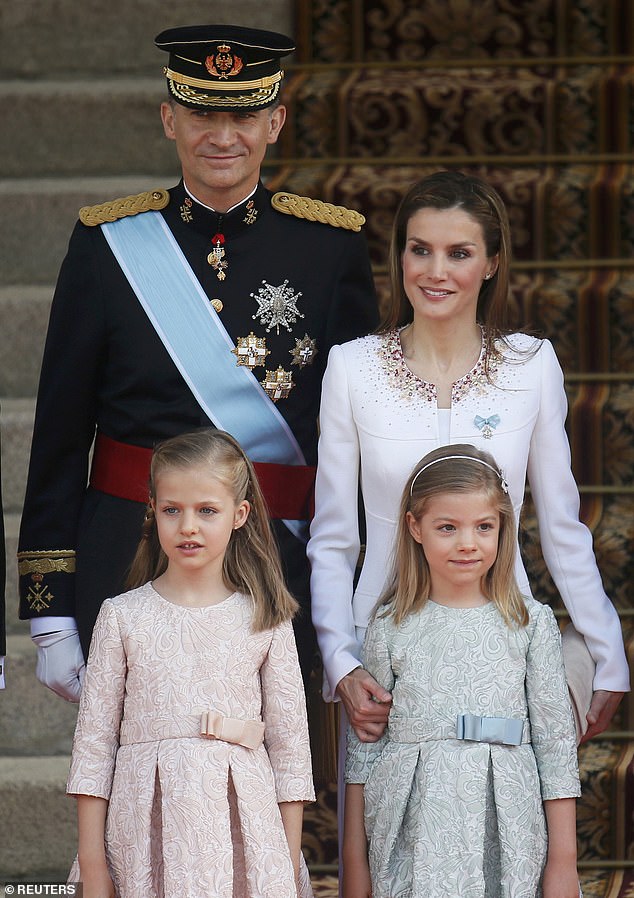 Bright future: Leonor, left, is the eldest daughter of King Felipe and Queen Letizia of Spain. Felipe ascended the throne in 2014 following the abdication of his father King Juan Carlos 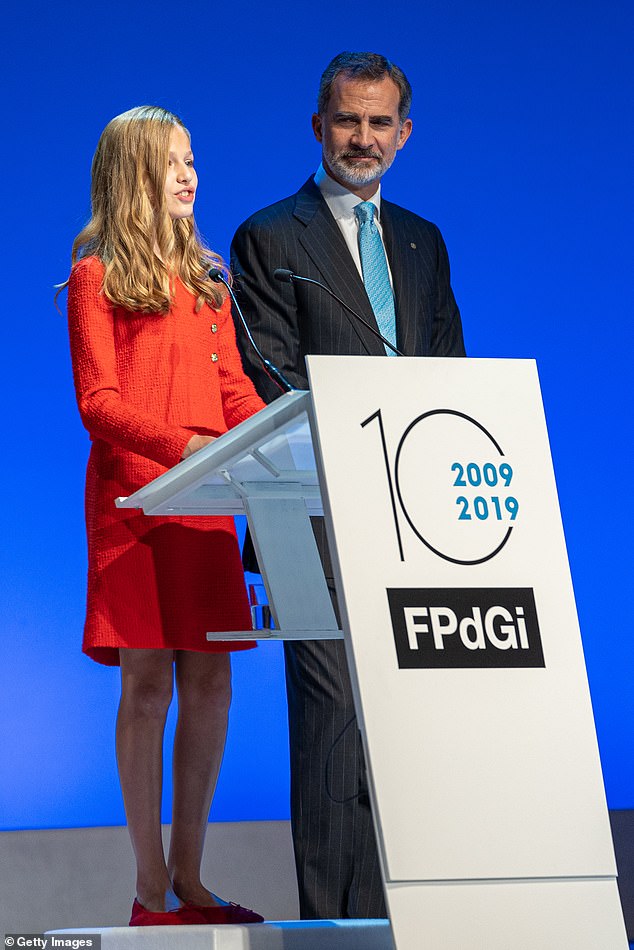 Linguist: Princess Leonor was watched by her proud father King Felipe as she spoke in five languages in a speech at an event in Barcelona in 2019 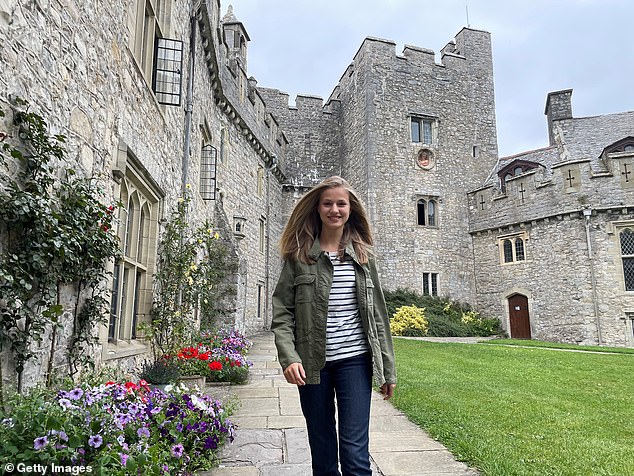 The talented teenager, who has inherited her mother’s polished sense of style, is also understood to be an accomplished cellist, and has honed her skills in tennis, sailing and gymnastics at an American summer camp.

Leonor was born during the reign of her grandfather, the now-disgraced King Juan Carlos who left Spain in August 2020 after becoming the target of several probes in Spain and abroad over alleged tax avoidance and questionable dealings in the Middle East.

The scandals have tarnished the reputation of the royal family and Felipe, 54, is working hard to distance himself from his father and restore faith in the monarchy.

Some believe the next generation of royals hold the key. One national newspaper compared Leonor to a ‘Disney Princess’ who would charm subjects and stem the tide of anti-monarchist sentiment.

King Felipe of Spain ascended the throne in 2014 following his father’s abdication and Leonor, then just nine years old, became heir presumptive to the throne.

However according to the Spanish constitution Leonor could still lose her place in the order of succession if her father King Felipe was to father a son. 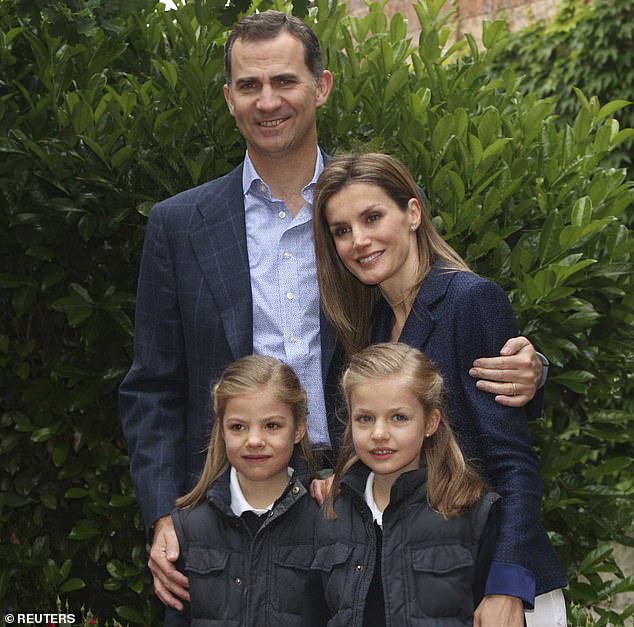 First family of Spain: King Felipe and Queen Letizia with their daughters in May 2014. Felipe’s father King Juan Carlos of Spain abdicated the following month 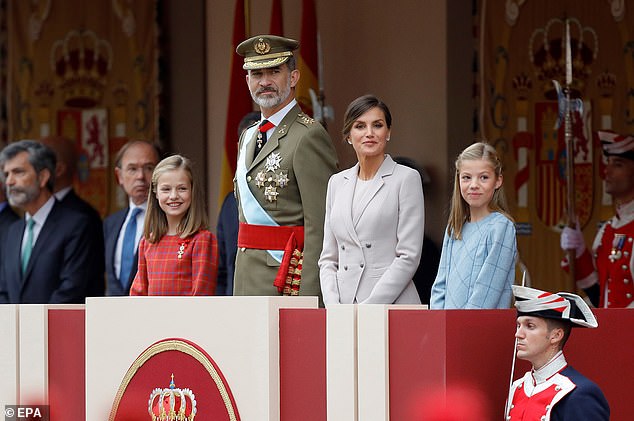 Proud father: King Felipe appears to be taking an active interest in preparing his eldest daughter for the throne and has previously revealed she undertakes her duties with ‘enormous eagerness’. Pictured left-right: Leonor, Felipe, Letizia and Sofia at Spain’s National Day in 2018 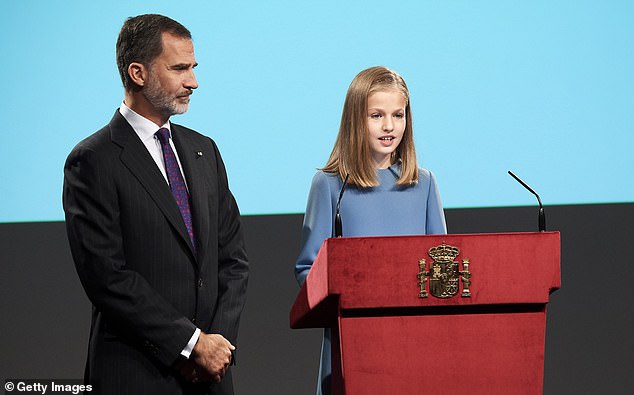 By her side: In October 2018, Felipe was the picture of fatherly pride as he watched his daughter deliver her first public address at an event in Madrid, pictured

There have been discussions about changing the law, which is based on the practice of male primogeniture, a system that favours any male heir over a first-born daughter, but legislation has yet to be passed.

Leonor was still in primary school when she began carrying out royal engagements and made her first speech in 2018, aged 13. It marked a full-circle moment for her proud father Felipe, who was the same age when he made his first public address.

The following year she spoke four languages – Spanish, Catalan, English and Arabic – when she made a speech at the Princess of Girona Foundation awards in Barcelona.

She carried out her first solo royal engagement in March last year. 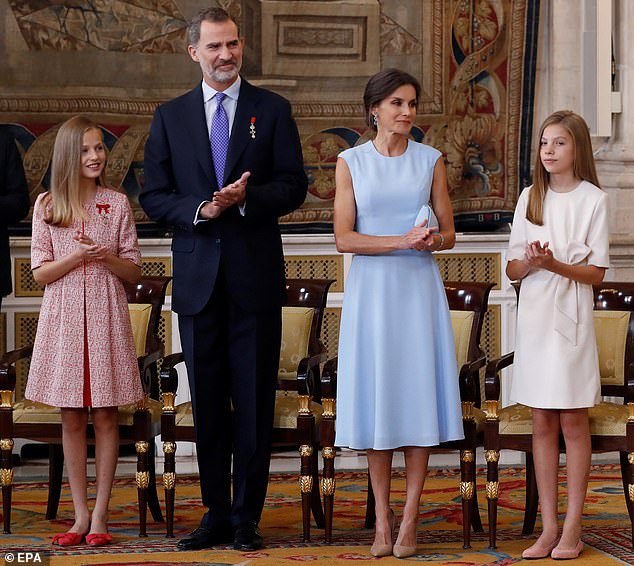 Public profile: Princess Leonor, King Felipe, Queen Letizia and Princess Sofia at a ceremony at the Royal Palace in Spain in June 2019 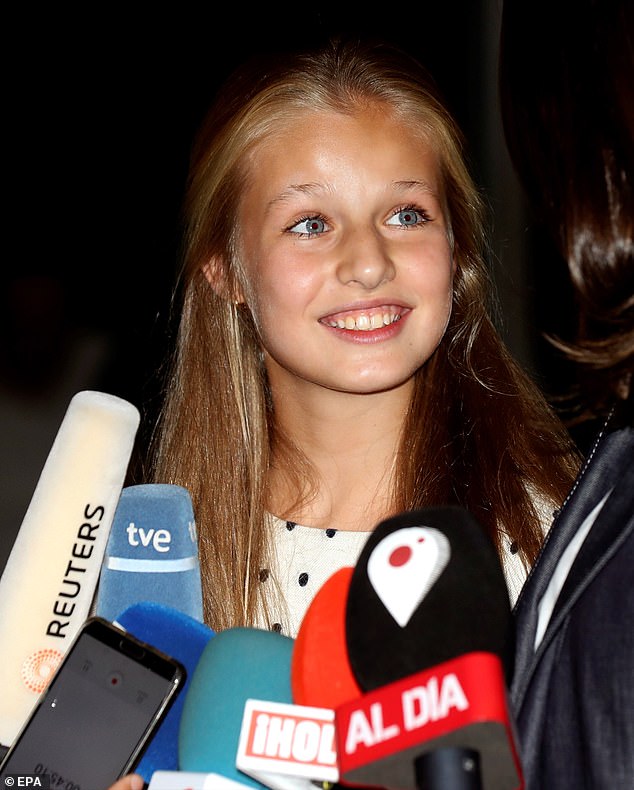 In the spotlight: Leonor answers journalists’ questions following a visit to see her grandfather Juan Carlos in hospital in August 2019

Style queen: Queen Letizia is widely considered to be one of the world’s most stylish royals, so it is perhaps of little surprise her daughters are already following in her fashion footsteps 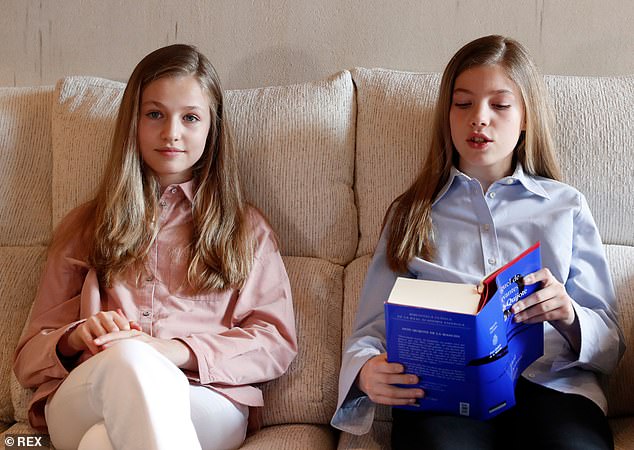 Doing their bit: Leonor, left, and Sofia, right, read a book from the palace during the pandemic

The princess, who learned English from a British nanny, attended Santa María de los Rosales School, the same school as her father, before announcing her decision to finish her education at UWC Atlantic College.

In 2021, Leonor and Princess Alexia of the Netherlands, 17, the second eldest child of the Dutch King and Queen, both enrolled on a £67,000, two-year course to study for their International Baccalaureate diploma.

The school offers activities and subjects like Tai Chi and Tibetan literature, leading it to be nicknamed ‘Hippie Hogwarts’. 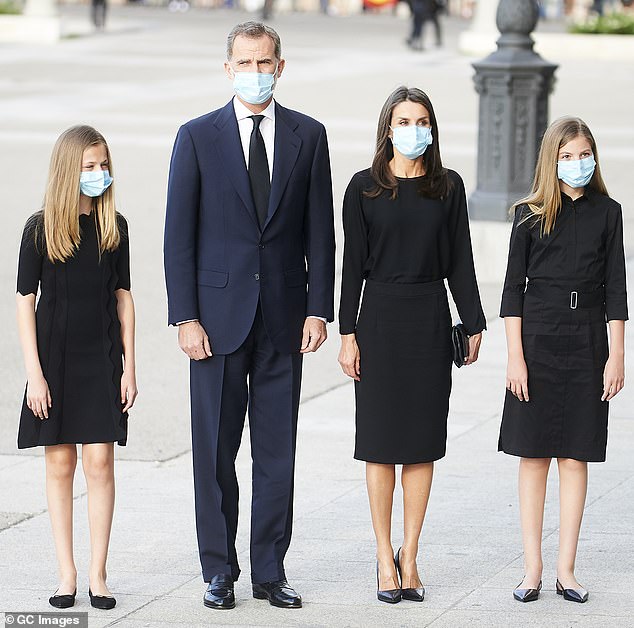 Remembrance: Leonor, Felipe, Letizia and Sofia remembered the victims of Covid in July 2020 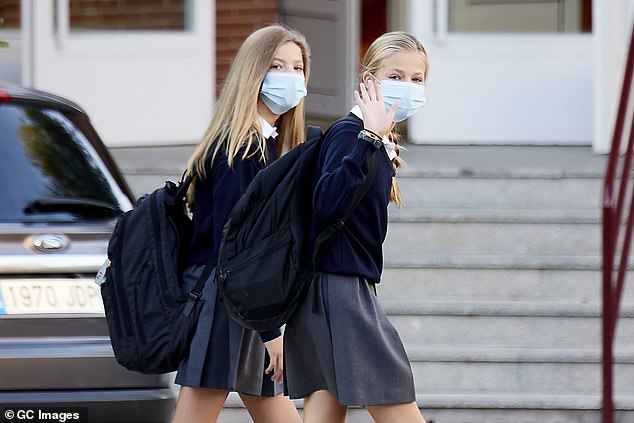 Back to school: Leonor, right, and Sofia were photographed as they returned to school at Santa Maria de los Rosales in September 2020. The following year she enrolled at UWC Atlantic College 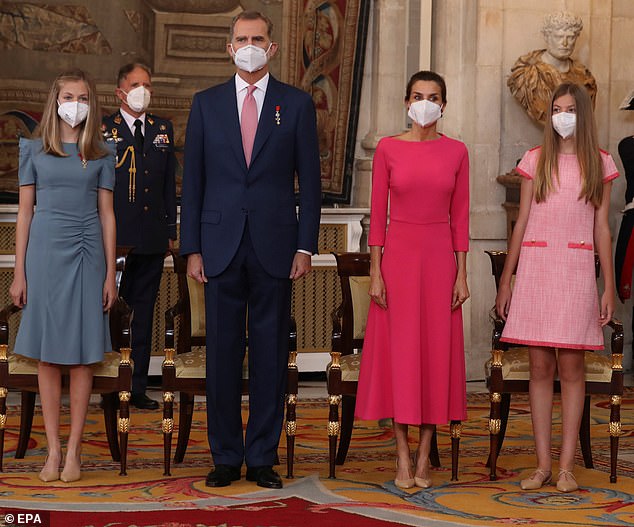 Model family: Leonor, Felipe, Letizia and Sofia at the Royal Palace in Madrid in June 2021

UWC Atlantic College has a proven track record educating royalty. King Willem-Alexander studied there in the Eighties and Belgian heir to the throne Elisabeth graduated in 2020.

Education at the school is played out in a magical place – a 12th century Castle by the sea – with its own seafront, woodland, farmland and valley.

During the school holidays Leonor has returned home and continues to carry out royal duties. 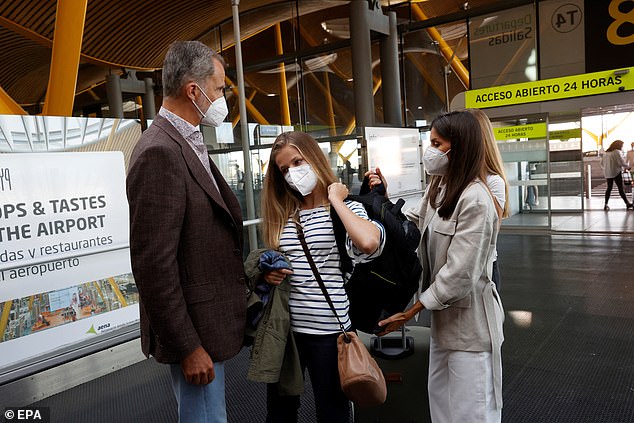 Next chapter: King Felipe and Queen Letizia of Spain dropped their daughter off at the airport as she left Spain for her British boarding school in August 2021 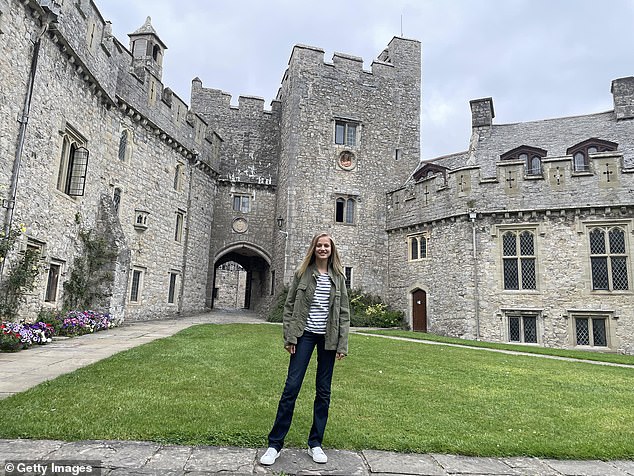 British boarding school: In 2021, Leonor and Princess Alexia of the Netherlands, 17, the second eldest child of the Dutch King and Queen, both enrolled on a £67,000, two-year course to study for their International Baccalaureate diploma 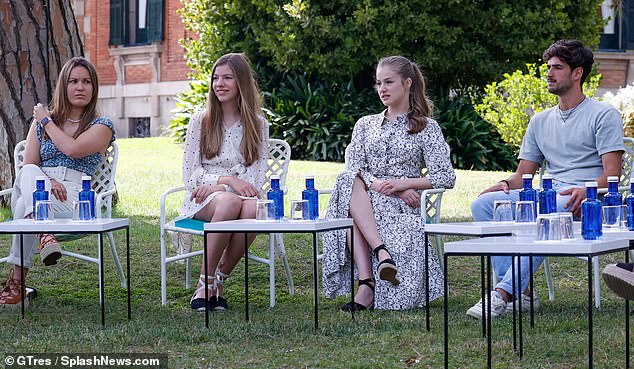 Busy schedule: Leonor works in Spain during the holidays. Pictured, Leonor (right) with her sister Sofia (centre left) at the Princess Girona Foundation Awards in Barcelona on Monday 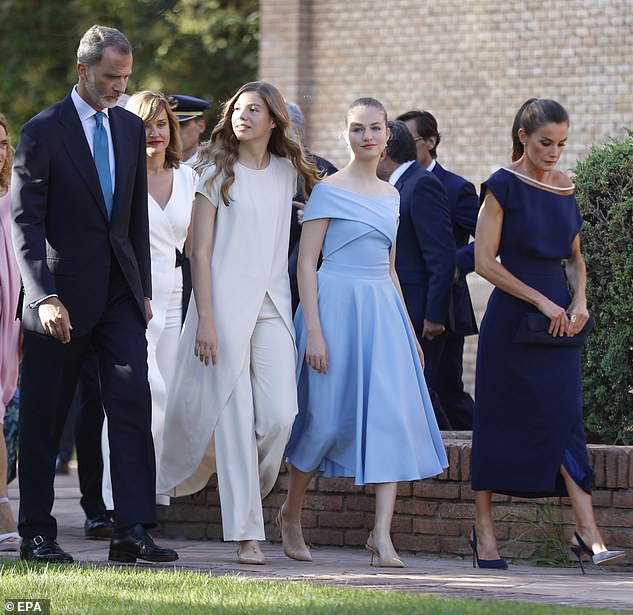 Stepping out: The family looked stylish as ever as they walked alongside each other at the Princess of Girona Foundation Award ceremony on Monday night

Notable royal alumni: King Willem-Alexander of the Netherlands, Princess Raiyah of Jordan, Princess Elisabeth of Belgium. Princess Alexia of The Netherlands and Princess Leonor of Spain are both current students.

Royal classmates: Princess Alexia of The Netherlands, left, and Princess Leonor of Spain, right, are both current students at UWC Atlantic College, in Wales 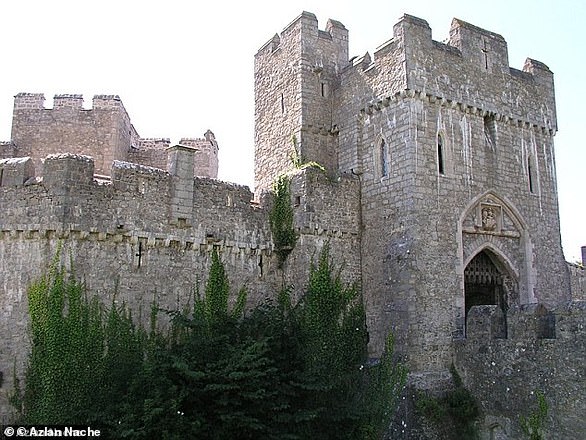 Princess Alexia of The Netherlands is leaving her home country and heading to Wales to study at UWC Atlantic College, pictured, the Dutch royal family has announce

Royal alumni: Princess Elisabeth of Belgium (left), who enrolled in 2018 but had to cut her time at the college short due to Covid-19; King Willem-Alexander of The Netherlands (centre) who attended from 1983 to 1985 and Princess Raiyah of Jordan (right) 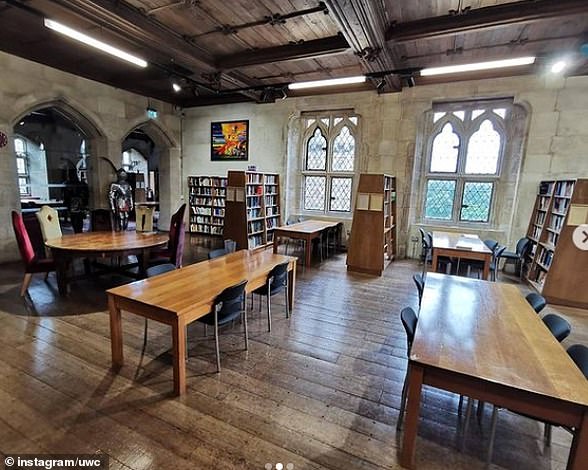 Old and new: Lessons take place in modern academic blocks built in the 1960s–80s, converted Medieval estate buildings, and the castle itself (pictured, the school’s library) 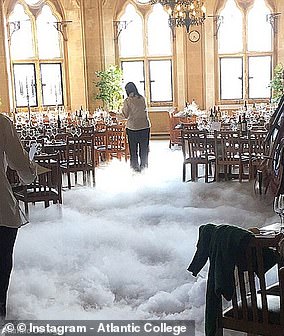 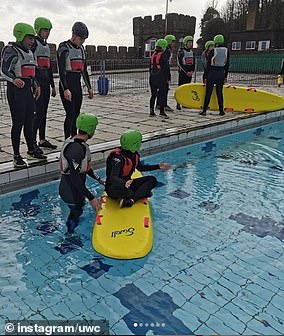 With school fees for a two-year course costing £67,000, the school has a range of extra-curricular activities on offer, with its website describes it as ‘providing a platform for young individuals to learn through shared experience’ (left, the dining hall, and right, the pool) 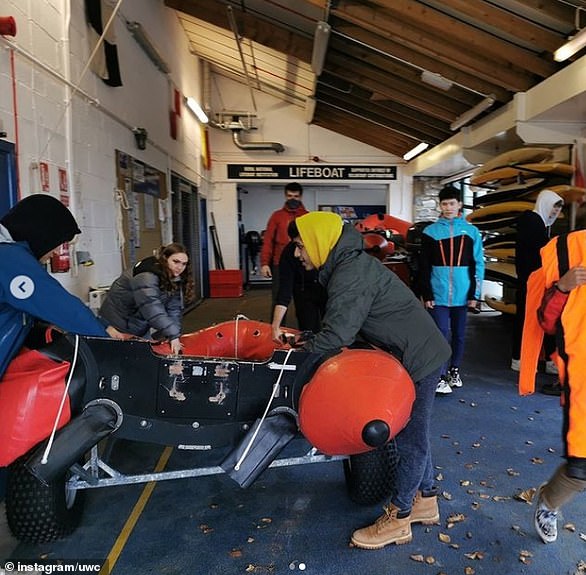 Princess Alexia of The Netherlands and Princess Leonor of Spain have swapped their European palaces for a school housed in a former Welsh castle.

Heir to the Spanish throne Leonor, 16, and Alexia, 17, the second eldest child of the King and Queen of the Netherlands, have both enrolled on a £67,000, two-year course to study for their International Baccalaureate diploma at UWC Atlantic College.

The school offers activities and subjects like Tai Chi and Tibetan literature, leading it to be nicknamed ‘Hippie Hogwarts’.

UWC Atlantic College has a proven track record educating royalty. King Willem-Alexander studied there in the Eighties and Belgian heir to the throne Elisabeth graduated in 2020.

Education at the school is played out in a magical place – a 12th century Castle by the sea – with its own seafront, woodland, farmland and valley.

Atlantic College is located near the town of Llantwit Major on the South Wales coast, overlooking the Bristol Channel. It has been continuously inhabited since it was first built.

St Donat’s Castle is the main building of the College, housing the Tudor Great Hall, the Gothic Dining Hall, the Bradenstoke Hall used for assemblies and performances and an extensive 25,000-book Library.

Students at the school stay in eight purpose-built boarding houses, which accommodate approximately 48 students each.

The modern accommodation houses are named after either ancient Welsh kingdoms or benefactors to the college: Pentti Kouri, Morgannwg, Powys, Whitaker, Gwynedd, Tice and Sunley.

Unlike a conventional full school day of teaching, lessons at UWC begin at 8am and are finished in time for lunch.

The two-year Diploma Programme has two parts: the International Baccalaureate Diploma Program (IBDP) curriculum, and a programme of experiential learning that focuses on key aspects of ‘peace, a sustainable future, and student initiative’.

Meanwhile there are also a wide selection of optional courses to choose from, including Design Tech, Visual Arts, Film studies, Music and Global Politics among others.

The College’s literary options range from English and French Literature to Czech, Russian, Tibetan, Swedish and Urdu Literature as well.

Classes take place in modern academic blocks built in the 1960s–80s as well as converted Medieval estate buildings, and the castle itself.