A RARE error coin has sold hundreds of pounds more than its face value on eBay, as coin hunters search their change for the most sought-after.

The 50p error coin sold for £360 yesterday on the site, after 47 bids from eight users who battled it out to claim the auctioned coin. 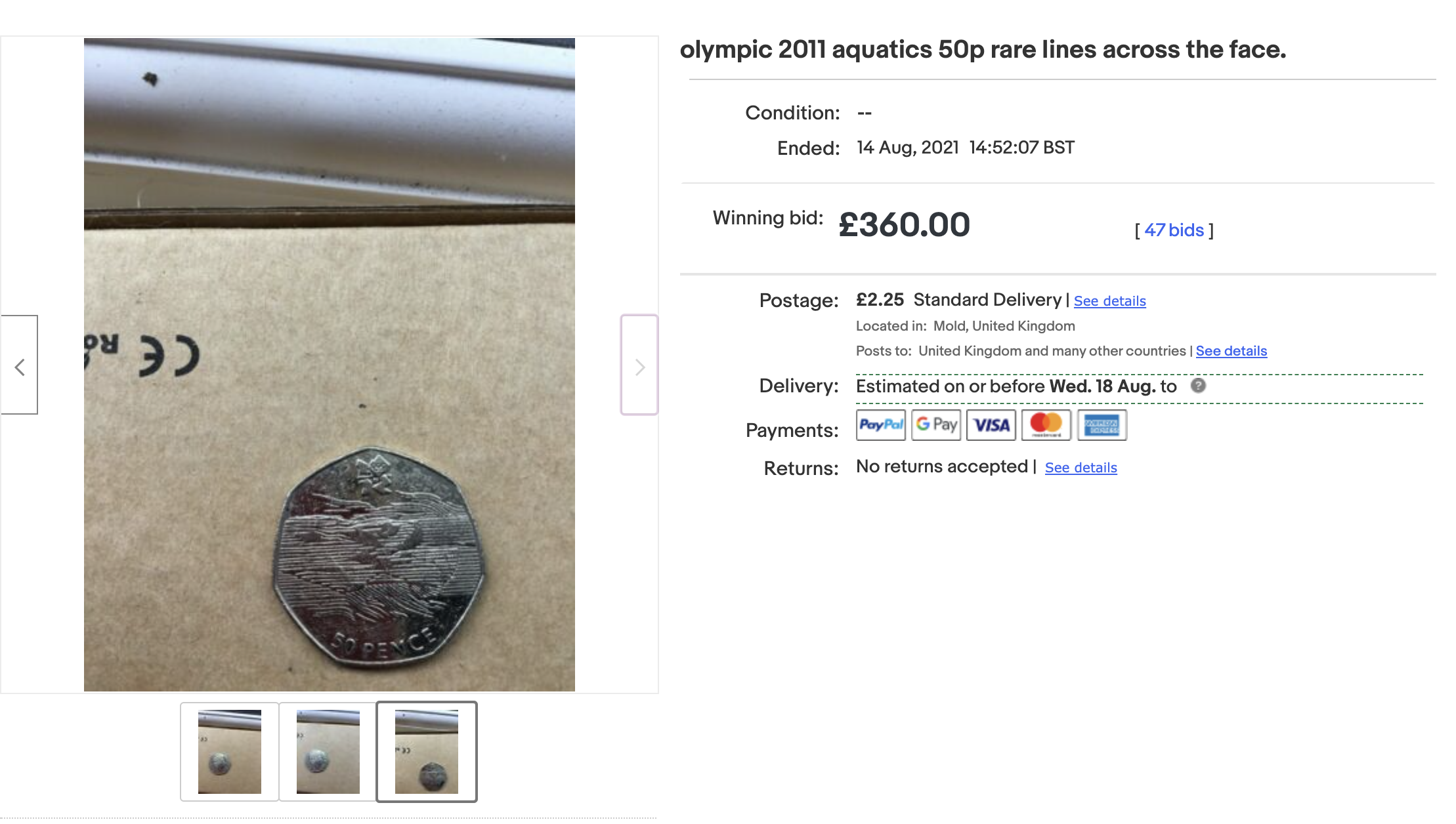 It comes as the most rare and valuable coins have been revealed according to ChangeChecker's latest scarcity index, with some fetching well over £300 too.

The coin that sold for £360 this weekend, features one of the 29 designs created to commemorate the 2012 Olympic games.

It was released in 2011 and has the image of a swimmer on one side.

While the coin itself is already considered rare due to the commemorative design, this copy actually features a minting error which has raised its resell price on eBay.

The official copy of the coin released for the games has less lines on the design, that mean the swimmer's face is shown off more – the error coin, in comparison, shows where these lines were kept in initially.

Only 600 in this style are in circulation, which is why collectors are willing to pay steeper prices to get their hands on a copy.

In that time avid collectors raised the price by almost 360 times the initial bid, before the final sale was called.

Bids quickly reached the hundreds as the auction only had one day left live, before it finally sold for the steep price.

Back in July, another coin with the same error sold for almost another £100 as one collector snapped it up for £420.

But the highest we have spotted this kind of coin going for was £1,000,when the same error found in another coin was auctioned off in March this year.

It's easy for a coin like this one to make its way into your wallet, and if you do find one it could be worth fishing out to try listing on a site like eBay.

If you do go to sell on the coin, you can ask the Royal Mint to take a look and see if it's real.

If it can be verified, then you'll be able to up the resale value, declaring that it's officially recognised.

Experts warn of coming across fakes all the time though, so be careful if you make a purchase and be wary of splashing out on something that's not been verified.

The number of bids on the listing can help you establish that the coin is the real deal, and something worth bidding on if you're in the market for rare coins yourself.

The £360 one had close to 50 bids which gives you a good indication.

You can also compare other rare coins on eBay to see how much they have sold for as reference, and check you're not overpaying for a rare error coin.

Online tools from change experts like Coin Hunter are helpful to see how much it could be worth too.

Remember, if you're selling on eBay then you need to keep in mind that a buyer could pull out as well.

That will make it harder to verify if coins have sold for the value they say they have.