The cost to home buyers of the Reserve Bank’s battle against inflation is poised to hit more than $1000 a month, with the institution ready to lift official interest rates even as Prime Minister Anthony Albanese urges it to consider the impact on ordinary workers.

The bank board meets on Tuesday with markets and economists expecting the RBA to take the official cash rate to a seven-year high of 2.35 per cent from its current level of 1.85 per cent. 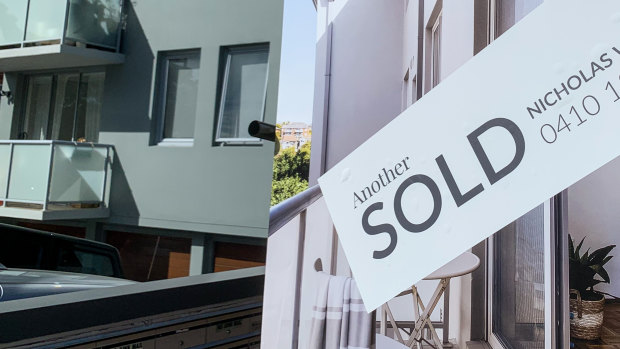 The repayments on an $800,000 mortgage are on track to be $1000 higher than four months ago.Credit:Peter Rae

A half percentage point increase in interest rates – the fourth successive such hike – would lift the average repayment on an $800,000 mortgage to more than $4300 a month. In April, when the cash rate was 0.1 per cent, the monthly repayments on the same mortgage were less than $3300.

Albanese said while he had confidence in the RBA, which is at the centre of its first independent review in 40 years, he also believed it understood the financial pressure it was putting on people.

“I’m sure that’s something that they do bear in mind, the impact on people of decisions that are made. That is something that people in authority, whether it be an independent authority like the RBA, or people in government have to do,” he told ABC Radio.

Cost of living issues dominated the first sitting day of Parliament, with the Coalition accusing the government of doing nothing to help Australians deal with high-priced energy and risking a wages blow-out with its industrial relations reform program.

Petrol prices will climb by at least 23¢ a litre from the end of the month when the cut in fuel excise, put in place by the former government, expires.

Treasurer Jim Chalmers, who has resisted calls to extend the excise cut that is costing the budget $2.7 billion, conceded home buyers were also being hit with higher mortgage repayments.

“The task of the government and the task of our government is to do what we responsibly can to
help people through the shorter term challenges and also to deal with the issues in supply chains to deal with cost of living where we can and build an economy that grows wages and improved living standards over time,” he said.

The Reserve Bank, like all central banks, is pushing up interest rates in a bid to bring inflationary pressures under control.

The Melbourne Institute’s monthly measure of inflation suggests it may be having an impact. Its inflation gauge showed a 0.5 per cent fall in prices in August, taking its annual rate down to 4.9 per cent.

But its underlying inflation measure lifted by another 0.1 per cent, taking it to 5.3 per cent.

Higher borrowing costs have yet to slow the car market, with data from the Federal Chamber of Automotive Industries released on Monday showing strong demand for new vehicles.

Despite the strong August, total new car sales are down 2.1 per cent for the first eight months of the year compared with 2021. 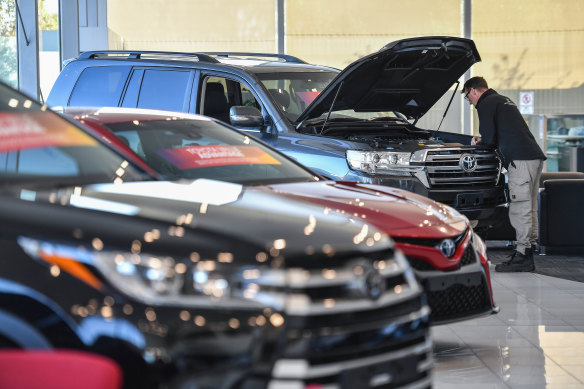 The median price of a new car has climbed by almost 19 per cent since COVID.Credit:Joe Armao

Chamber chief executive Tony Weber said it appeared the worst of supply constraints that had afflicted the new car market since late last year was coming to an end.

“This gives hope that the supply of vehicles to the Australian market is beginning to show signs of
improvement,” he said.

The same figures also showed a lift in battery electric vehicles, with Tesla alone selling almost 3400 units. EVs accounted for a record 4.4 per cent of the market in August.

Data collated by PriceMyCar shows vehicle purchases are strong despite large increases in their sticker prices.

PriceMyCar chief executive David Lye said carmakers had increased their recommended retail prices as supplies had fallen. Some had lifted their prices four times in the past 12 months.

Dealers were also reluctant to offer discounts to entice buyers in such a strong market.

The jobs market is also yet to cool. ANZ’s measure of job advertisements showed a 2 per cent increase in August, taking total ads to 242,000 – the highest number since just before the global financial crisis in 2008.

“We continue to expect solid employment growth over the remainder of the year, underpinned by the significant volume of unfilled labour demand,” she said.

This week’s national accounts are expected to show the economy continuing to grow through the June quarter.

The Australian Bureau of Statistics on Monday reported company profits lifted by 7.6 per cent in the quarter to be 28.5 per cent up over the year. The surge was driven by the mining sector, where profits in the quarter hit an all-time high of $81 billion, an increase of 51 per cent or $27.5 billion over the past year.

Wages grew by 3.3 per cent in the quarter to be up by 6.8 per cent over the year. The growth was driven in part by the increase in the number of people in work, extra hours by those with a job and wage increases.