Hilma af Klint: The Secret Paintings, which broke Guggenheim records in 2019, is a cosmic ray of light piercing through Sydney’s winter chill.

The extraordinary story of the Swedish artist, born in 1862, is a gift to any gallery looking to draw the crowds – a visionary artist making abstract art before her time, unappreciated and undiscovered until after her death. 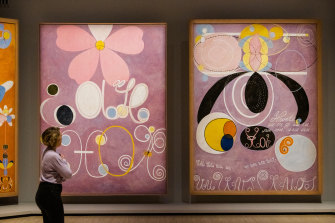 A viewer takes in Hilma af Klint’s The Ten Largest collection, part of her show The Secret Paintings at the Art Gallery of NSW. Credit:James Brickwood

Indeed, af Klint wanted it that way, leaving instructions that her works not be exhibited until 20 years after her passing in 1944. A spiritualist influenced by theories including Theosophy and the scientific advances of the age, af Klint believed that her paintings contained messages for the future that her contemporaries were not ready for.

The future has now arrived, and The Secret Paintings features 120 works, including several series of
paintings which show the fascinating style of this artist who was making abstract art before the term existed.

The exhibition begins with small botanical studies showing af Klint’s skill in painting the natural world, after being one of the first women artists to study at Stockholm’s Royal Academy, as well as an obvious tenderness towards nature.

The first gallery introduces her work with The Five – a group of women artists who regularly held spiritual meetings and made automatic drawings together. While af Klint went on to make the other works in the show alone, it’s clear she didn’t see it that way, acting as a conduit for spiritual beings who communicated with her and planning for the future of the works beyond her own lifetime. It was an ego-less approach at odds with modern art history. 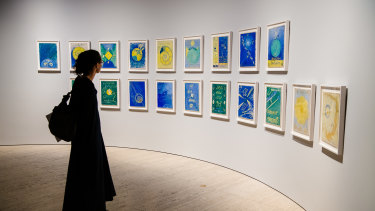 Af Klint left instructions upon her death that her art not be displayed for 20 years. Credit:James Brickwood

In 1906, af Klint received what she described as a “commission” from a spirit guide. Over the next
nine years she completed 193 works for this project, which she titled The Paintings for the Temple, and this show includes several series from that commission.

The minimal exhibition design allows af Klint’s extraordinary paintings to take centre stage. Af Klint
was interested in breaking down dualities such as gender, and a group of works exploring the intersecting of female and male energy in blue, yellow and green introduces the artist’s use of text and symbols. The framing of these works allows us to see the way they are constructed, hinting that they may have originally been hung as a series of banners. There is a sense through the whole exhibition that, although this is obviously a museum presentation, there is a sympathy towards the artist’s original vision. 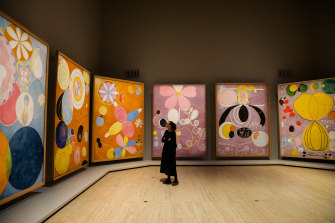 The Ten Largest collection appears to be levitating and envelops the viewer.Credit:James Brickwood

The centrepiece of the exhibition is the group of 10 huge paintings, titled The Ten Largest. Hung so
they appear to be levitating towards the viewer, the series begins on the left with blue representing
childhood, moves through vibrant tangerine and lilac, through to a washed-out pink signifying old
age. The sheer scale of these paintings is enveloping and in this setting we can see af Klint’s vigorous brushstrokes, and the fascinating details that pepper her works. 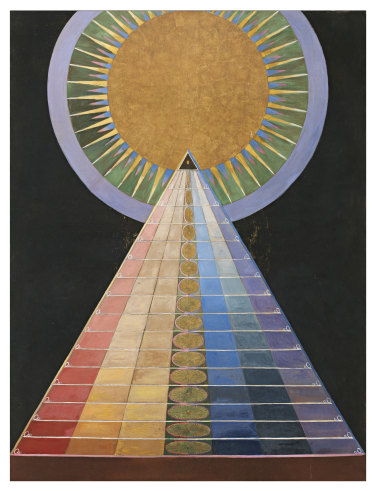 Through the following galleries, we can see af Klint developing and expanding her visual language. Motifs flow from one work to the next, bringing together archaic and futuristic ideas. The Altarpiece triptych, intended for the centre of af Klint’s temple, features gridded pyramids intersecting with gold-leaf sunbursts. They are both diagrammatic and cosmic, medieval and futuristic.

The Secret Paintings concludes with a display of small watercolours that pulsate with quiet
intensity. More spontaneous and gentle than The Paintings for the Temple, they recall the collaborative drawings af Klint made with The Five. The exhibition lays out the bigger picture of af Klint’s practice, from freehand drawing, to meticulous diagrammatic notekeeping.

The layers of secrecy surrounding af Klint’s paintings make for a compelling story, but also serve as a reminder of the fundamental role of artists. As The Secret Paintings shows, af Klint’s willingness to learn, listen and interpret led to the development of a startling new approach.

The intriguing narrative of an unknown woman artist working ahead of her time is sure to draw in the crowds, but it is her paintings that will keep them there.