The song cycle takes the listener into one of music’s most personal spaces, like reading poems in the privacy of your own imagination. Although they do not usually tell stories operatically, Sydney Chamber Opera gave a series of song cycles a subtle narrative in a series of “cycles of song cycles”, as SCO Artistic Director, composer and pianist for these concerts Jack Symonds put it. 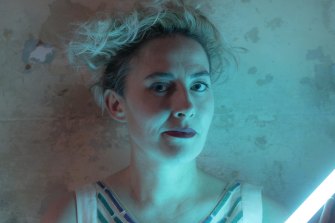 Jane Sheldon’s voice captured an iridescent quality as it mixed with the resonance of the old church’s wooden beams.

Singing beneath a mobile of suspended bars of light, soprano Jane Sheldon began with Wolken (Clouds), a gentle cycle of slowly shifting luminance by French compose Pascal Dusapin to poems by Goethe. Three songs by Mary Finsterer explored the nexus of human aspiration with the continent of Antarctica from the perspective of a child, a cartographer and a theologian.

In glittering vocal cascades in the first song, Sheldon’s voice captured an iridescent quality as it mixed with the resonance of the old church’s noble wooden beams. In Three Old Inscriptions by Hungarian Gyorgy Kurtag, Sheldon explored the quietest sighs and fragile vocal filaments against flitting piano sounds from Symonds.

She concluded with Faure’s harmonically sophisticated cycle, The Song of Eve creating remarkable soft radiance which returned to the textural softness of Dusapin’s work but embedded with twilight warmth as though this late work were not an ending but a new beginning.

For the specially commissioned work David Evans chose Emily Dickinson’s In my brain, setting it to music of febrile inventiveness. The work started with a singular held pitch to the word “I” before developing to frenetic, gasping and convulsive textures. Later, the held note is heard from within the piano as though to symbolise the poem’s journey of inner discovery.

Fraser ended with Schoenberg’s 1907 cycle of 15 songs to poems by Stefan George, The Book of the Hanging Garden, spanning its dark but expansive emotional range with deft control and hugely impressive expressive power. These were beautifully curated programs of rich and neglected music exploring subtle subjective and spiritual connections across time.

The next In Song programs are on June 19 at The Church, Mitchell St Alexandria

And, giv, music, Neglected, Rich
You may also like:

How to tell the difference between gut instinct and anxiety

Bob Odenkirk in stable condition after experiencing a “heart-related incident”