Follow
Home » Lifestyle » Rishi Sunak: Governments can not save the planet alone, businesses must step up

Rishi Sunak: Governments can not save the planet alone, businesses must step up 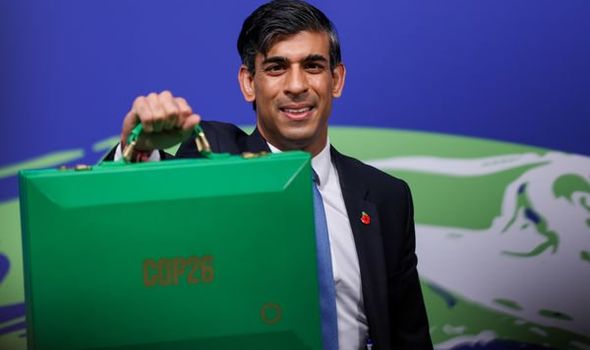 He told the biggest-ever gathering of finance ministers and business leaders yesterday: “Public investment alone isn’t enough, so our second action is to mobilise private finance.”

He made his plea after announcing a $130trillion (£95trillion) green commitment from hundreds of firms.

The Glasgow Financial Alliance for Net Zero, led by former Bank of England governor Mark Carney, is backed by 450 organisations controlling 40 per cent of global assets.

Mr Carney said that the world needs £73trillion to get to net zero – the elimination or offsetting of all greenhouse gas emissions – by 2050.

He said: “I was in the room two years ago in the General Assembly, along with presidents, prime ministers, dignitaries and business leaders. Greta Thunberg rightly blasted everyone, with words to the effect of you’ve stolen my dreams and my childhood.

“Right here is where we draw the line. The $130trillion that the Chancellor announced is more than is needed for the net zero transition globally.”

Mr Sunak was backed by CBI Director General Tony Danker, who told delegates: “Whatever its formal agreements, this COP will best-known as the moment we reached a consensus: that governments can’t get to net zero without business. And that businesses who fail to embrace net zero will get left behind.”

Describing tackling climate change as a “commercial imperative”, he added: “This is a time for business leadership.

“We can’t do it without governments but nor can we wait for them to reach perfect agreement. This is a moment in history where every firm needs to step up and lead.”

Mr Sunak admitted the UK will likely miss one of the key goals of its COP26 presidency – getting rich countries to give poorer ones $100billion (£73billion) a year for five years so they can prepare for climate change.

But he confirmed that the target would start to be met from 2023.

Dr Ben Caldecott, director of the Oxford-based UK Centre for Greening Finance and Investment, said it will “spur demand for green finance and accelerate decarbonisation, not just in the UK but wherever UK firms do business”.

Tony Burdon, chief executive of Make My Money Matter, said of the investors: “The power, potential and responsibility of this group is extraordinary. But now is a time for action, not words.”

Christian Aid’s Jennifer Larbie was less positive, saying: “This announcement does little to shift the dial now on the trillions still flowing into fossil fuel projects every day, with the deadliest of impacts borne by developing countries.

“The UK government must mandate the financial sector to act with urgency to end fossil fuel investments.”

And Veronica Oakeshott of Global Witness said that since the 2015 Paris Climate Agreement, global banks and investors had made $1.74billion (£1.27billion) from deals with businesses linked to the destruction of forests and human rights abuses, even though many had signed voluntary green commitments.

She said: “We cannot stop climate breakdown while banks continue to bankroll and profit from the destruction of the rainforests we all rely on.

“Time and time again we have seen that voluntary banking commitments are clearly not worth the paper they are written on – and we don’t yet have reason to believe today’s will be any different.”

And yesterday he got two of them in the bag – or so it seemed.

First up was Chancellor Rishi Sunak with his deal that commits £95trillion from hundreds of firms to green financing. That’s 40 per cent of global assets.

But will pre-existing investments in fossil fuels be axed?

And what will happen to the other 60 per cent? It’s unclear.

Then another big fanfare, as Business and Energy Secretary Kwasi Kwarteng declared that the end of coal “is in sight”.

A coalition of 190 nations agreed to phase out coal power – by the 2030s for major economies and the 2040s for the rest.

But it was far from apparent whether coal-guzzling China, which sent a mere 60 delegates to the summit compared to Brazil’s 393, is sold on this phase-out.

Meanwhile, a study by Melbourne University predicted that COP26’s commitments would put the world on course for 1.9C of warming by the end of the century.

That’s way short of the Paris Climate Agreement’s 1.5C target – but better than a UN prediction pre-COP26 that the world was heading for a dangerous 2.7C.

However, if Boris is to make coal, cars, cash and trees work for the climate, it would help to have China’s absent leader Xi Jinping fully on board.

This Vaccine Card Holder and Passport Protector Is on Sale for Only $9!