Princess Leonor of Spain and her younger sister Sofia sent royal fans wild after linking arms and holding hands at the Princess of Asturias awards over the weekend.

The Spanish royal family visited Oviedo, Asturias over the weekend to celebrate the Princess of Asturias accolade, which is now in its 33rd year.

The award, which shares it’s name with Leonor, is given to the town or village in Asturias ‘that has stood out in a notable way in the defence and conservation of its natural, environmental setting, its historical and cultural heritage’.

Leonor, 16 opted for a sparkling blue floral gown for the occasion, while her younger sister, 15, donned a navy sequin dress for the outing.

During the awards ceremony, the sisters were tactile with one another, holding hands and smiling at one another as they walked together. 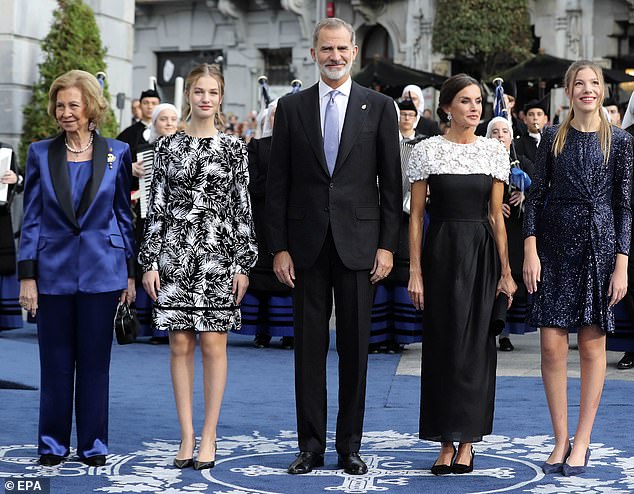 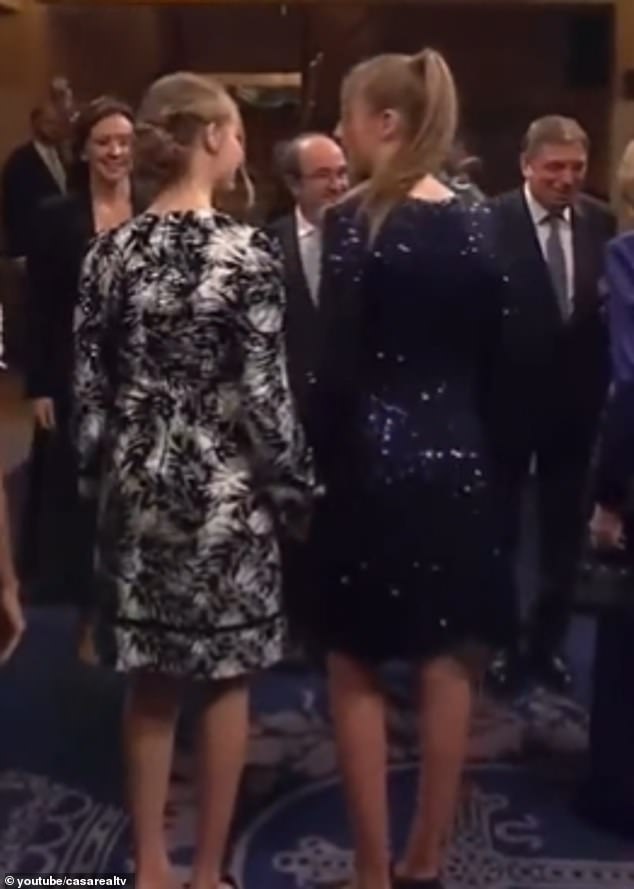 Many royal fans were delighted by the videos, which were shared over the weekend, with one calling the pair ‘such supportive sisters’

‘They are the future of the Spanish Monarchy and have no doubt that Leonor will make a fine Queen one day and Sofia will be able to carve her own path while being the number one supporter of the monarch.’

Another wrote: ‘They seem to have such a special bond.’

A third added: ‘They are so sweet, and definitely a new (much needed) faces for the Spanish monarchy.’

One commented: ‘I love that they are holding hands. Such great supportive sisters.’

Many social media users were blown away by the clips, suggesting King Felipe and Queen Letizia ‘must be so proud’

‘Such lovely girls. Their parents must be so proud,’ another wrote.

Each recipient present at the ceremony receives a diploma, a sculpture expressly created for the awards by Spanish sculptor Joan Miró, and a pin with the emblem of the Foundation.

There is also a monetary prize of 50,000 euros for each category, this amount is shared if the category has more that one recipient. 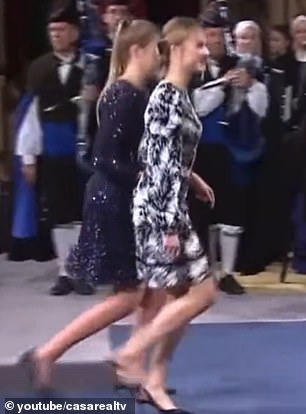 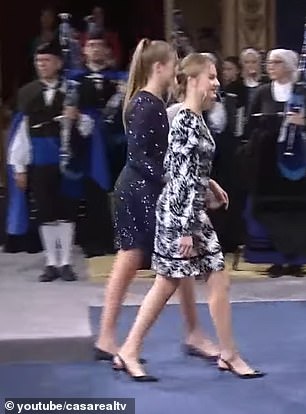 Entering into the venue, the pair appeared to link arms as they walked in behind their parents (left and right)

At the event on Saturday night, the sisters appeared in high spirits, and could be seen giggling with their parents and sharing a few words with one another.

Entering into the venue, the pair appeared to link arms as they walked in behind their parents.

In one moment, Princess Leonor approached her sister, who was standing and chatting to a group of attendees, before slipping her hand into her younger sisters.

Earlier in the day, Leonor joined her parents for a solo visit to Cadavéu in Valdés. 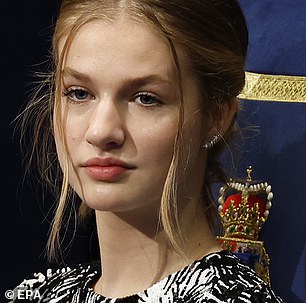 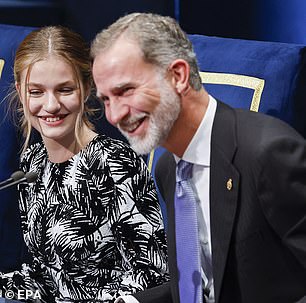 At the event on Saturday night, the sisters appeared in high spirits, and could be seen giggling with their parents and sharing a few words with one another (pictured Leonor with her father King Felipe) 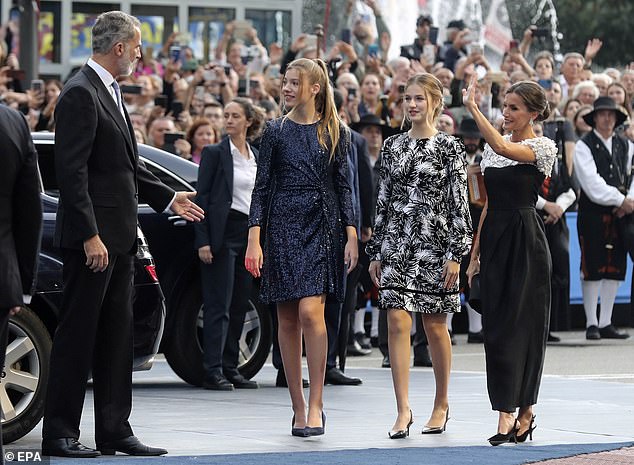 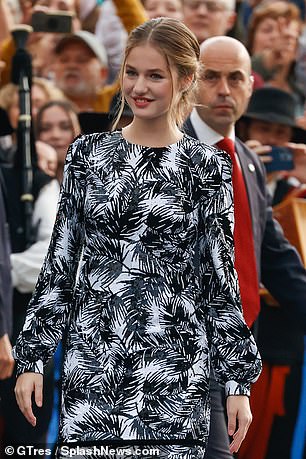 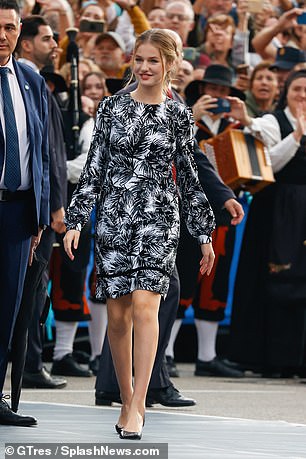 The heir to the throne Princess Leonor, who shares her name with the award ceremont, opted for a tropical themed dress with a black palm print

Queen Letizia opted for smart casual for the outing, in a striped black and white T-shirt and black tailored trousers. She completed her look with black leather shoes.

The Spanish royal, 50, wore her brunette locks loose for the occasion, and kept her make-up natural as she greeted locals and spoke with children in traditional dress.

Her eldest daughter Princess Leonor was just as stylish as her mother in a bright pink jumper and off-white cargo trousers. She swept her blonde hair back into a ponytail.

Leonor has been studying at UWC Atlantic College in Wales since September 2021, but returned home to Spain for half term.

It comes as Leonor – who started her second year at the UWC Atlantic College at St Donat’s Castle in Wales – is set to train with all three branches of Spain’s military from September 2023. 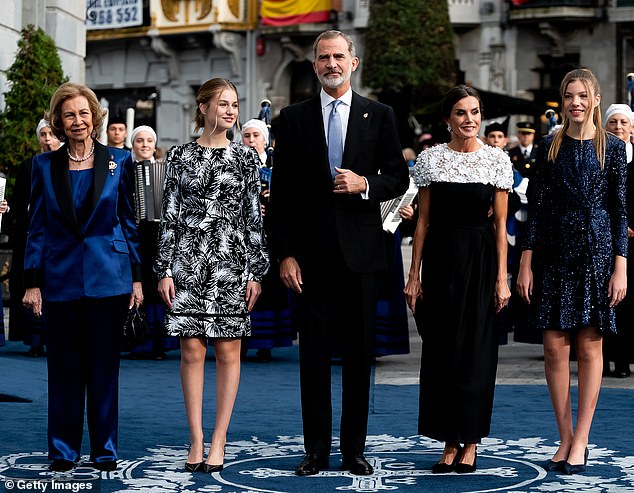 The daughter of Felipe and Letizia will follow in her father’s footsteps and will train with the army, the navy and the Spanish air force before moving on to the rest of her university studies.

Last month the Spanish newspaper El Pais reported that Leonor’s military training would culminate with a stint on board the Juan Sebastián de Elcano, a training ship used by the Spanish Navy.

It was also revealed that the young Princess would go on to study law at university once her training with the military is complete.

Her choice of university has not been revealed yet, however, her educational trajectory is extremely similar to her father’s, King Felipe VI.

After graduating from high school at Lakefield College in Canada, Felipe returned to Spain and attended the General Military Academy of Zaragozo, and went on to study at the Naval Military School in Marín.

He ended his training with a stint at the General Air Academy in San Javier.

His also completed his military training with a stint on the ship Juan Sebastián Elcano aged 18 in 1987, and went on to study law at the Autonomous University of Madrid. 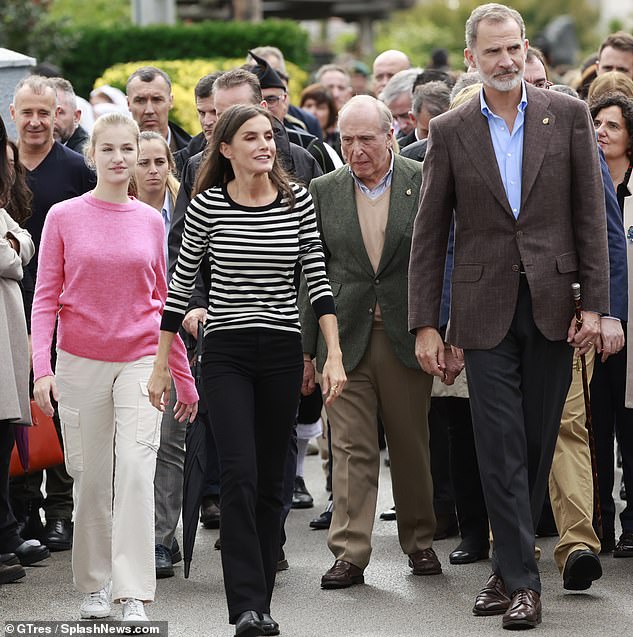 Earlier in the day, Leonor joined her parents for a solo visit to Cadavéu in Valdés (pictured together)