Ryan Reynolds’ Hilariously Confirms Who He Thinks Would Win a Deadpool, Wonder Woman, and Black Adam a Fight

Superhero roles tend to override almost every other role an actor plays sometimes. So when Ryan Reynolds, Gal Gadot, and Dwayne Johnson starred in Red Notice together, several people saw it as Marvel’s Deadpool and DC’s Wonder Woman and Black Adam. One interviewer even brought it up, asking Reynolds which hero would win in a fight. 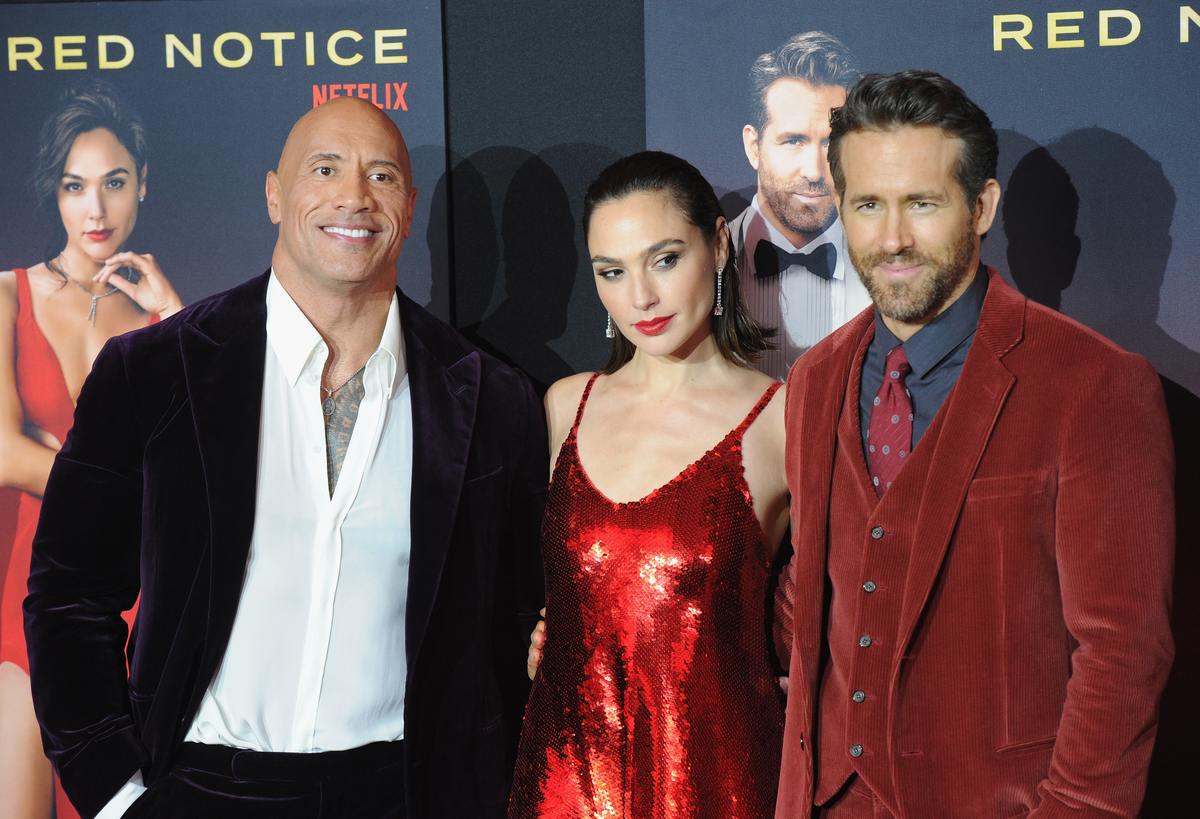 Reynolds was the last of the three actors to join the Red Notice cast. Around that time, the film moved from releasing under Universal to Netflix.

Fans remember Ryan Reynolds as his too-perfect casting as the Merc with a Mouth Deadpool. Like his character, he had some flattering and somewhat weird things to say about his co-stars.

“[Gadot] can go toe to toe with pretty much anybody, even a skin-covered mountain like Dwayne Johnson,” Reynolds said in an interview with Elle.

Gadot exploded into the DCEU in Wonder Woman as Diana. She went on to star in Justice League and Wonder Woman 1984. The actor brought the character to new heights.

Dwayne Johnson has so far only appeared as his anti-hero in the Black Adam trailer. However, he looks to bring a brutal kind of hero to screen in summer 2022.

The Deadpool, Wonder Woman, or Black Adam actors joined the Red Notice cast, and everyone thought it. One interviewer was brave enough to say it, though.

An interviewer asked Reynolds who would win, Deadpool, Wonder Woman, or Black Adam

An interviewer for Variety caught Reynolds and asked him if all their heroes suited up to fight, who would come out victorious?

“Alright, so I’m going to start off with a very hard-hitting question,” Variety asked Reynolds. “Given your castmates, Deadpool, Black Adam, and Wonder Woman: who’s going to win in a fight?”

Reynolds laughed for a moment before collecting his thoughts.

“Oh boy, I think the audience,” he said. “The audience is definitely going to win in that fight. Yeah, and whatever lawyer managed to figure out how to bring all those three together.”

Reynolds revealed who he thinks would win the fight

The next logical question from a joke about who would win turns into a question of who would actually win in a fight between the three.

Another interviewer from Entertainment Tonight asked a similar question. “Well, Black Adam, we don’t really know,” Reynolds said. “We can’t rush to judgement before all the facts are in there.”

While both Black Adam and Wonder Woman fights with the gods’ power, Deadpool can’t die. In fact, he dated the personification of Death in Marvel comics for a time.

“It’s going to be a weird fight,” Reynolds continued. “I’m kind of unkillable. I don’t know what Wonder Woman‘s status is there in the unkillable department, although she seems fairly unkillable. I’m just gonna go with Wonder Woman.”

The battle would come down to how you define ‘winning.’ The DC heroes could exchange devastating blows and withstand heavy hits. Deadpool would regenerate any damage he took.

While Marvel head Kevin Feige told ComicBook.com to “Never say never,” in terms of a Marvel and DC crossover, a crossover remains unlikely at best.

A matchup between the heroes is not impossible, however.