Sex, brutality and beauty collide in this triumphant Butterfly

As Pinkerton praises his “Butterfly”, Cio-Cio-San asks, half playfully, whether it is true that in America they pierce captured butterflies with a pin. Graeme Murphy’s production starts with this image, the captive creature (dancer Naomi Hibberd) suspended from blood-red braids, and brings it back at key points as a central motif.

Michael Scott-Mitchell’s set is a central platform, raised like a ragged promontory to resemble a display board – a house – an island – each defended from a hostile world with fearsomely sharp blades. Jennifer Irwin’s costumes evoke the oriental and occidental sides of early twentieth century colonialism while striking digital images (Sean Nieuwenhuis) swirl on moving screens to make a constantly shifting backdrop, magnifying fears, intensifying desires, exploding into colour and darkening into despair. 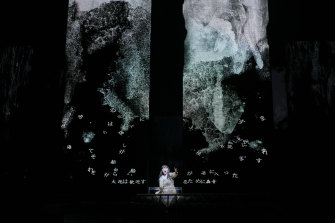 Sae-Kyung Rim as Cio-Cio-San gives a triumphant performance with a voice of gleaming clarity.Credit:Guy Davies

As Cio-Cio-San, the Butterfly, Sae-Kyung Rim gives a triumphant performance with a voice of gleaming clarity through its many moods, from caprice and gentle satire to fiery power and tragedy. In the first act this stands as a counterfoil to the vulnerable freshness she creates as the teenage bride. 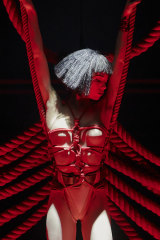 She sang Un bel di, vedremo of Act 2, with graceful phrases of elegant simplicity, the climactic moments achieving power without disturbing the smoothness of the finish. As Pinkerton Diego Torre sang valiantly in Act I, his classic “spinto” sound sustaining key moments of the drama, before succumbing to illness at interval, leaving young artist Thomas Strong to step into the final act with nothing more than a natural confident bearing, smooth sound and adrenalin to guide him. It was an impressive display of show-must-go-on professionalism.

In the role of the faithful servant, far from simpering acquiescence, Sian Sharp’s Suzuki has a knowing, seasoned perspective on her mistress’s indignities. Sharp’s voice has developed wonderful warmth and she phrases lines with a natural sense of musical shape.

As the consul Sharpless, who warns Pinkerton about his unbounded entitlement, Michael Honeyman’s gently grained voice and mellifluous melodic shape seems laced with the wise sadness of experience. His scenes with Sae Kyung Rim were the most touching and dramatically nuanced of the evening, his courteous propriety masking empathy, as her youthful openness seeks security.

Kiran Rajasingam is a softly-sung Yamadori for all his riches, and Jane Ede projects patient quietness as the unfortunate Kate Pinkerton.

Conductor Carlo Montanaro drew together the work’s gathering tensions with sure instinct for when to intensify and quicken. Responsive and finely balanced, the Opera Australia Orchestra spanned moments of still transparency at the start of the second half to focused admonitory force at the close, while the Opera Australia chorus huffed in Act 1 and hummed in Act 2 with discreet balance.