A suspect has been caught — and charged with attempted murder.

A woman who shoved a waiting passenger into an oncoming train has been charged with attempted murder.

On Monday NYPD released a sickening video showing the oblivious female victim waiting for the approaching 8 AM train at the Times Square subway station — when a woman jumps up from behind and pushes her into its path.

Fortunately, the victim impacted the side of the train, and avoided falling in front of it by milliseconds; nevertheless, investigators have classed the assault as an attempt on her life:

The 42-year-old woman was rushed to hospital suffering facial injuries; she is expected to survive.

It was unclear if the attack was random or there was some sort of dispute between the women beforehand; but according to MTA Acting CEO Tim Minton, it was “unprovoked, senseless and absurd.”

Police immediately initiated a hunt for the suspect, and by Tuesday morning, they had her: 29-year-old Queen’s resident Anthonia Egegbara, PIX11 reported.

The attack had fellow passengers on edge. 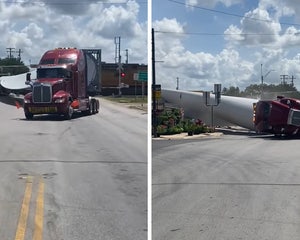 “When I’m on the subway platform I make sure that I’m ready to grab something,” a second added.

Another pointed out: “We’re all usually in our phones and stuff, or listening to music. So we’re not always 100 percent aware.”

And being pushed in front of a train is not their only worry either; just hours after the attack, a man in his 30s shot himself in the leg — on the very same platform.

Sh, shows, sickening, video, woman
You may also like: