A corruption inquiry has heard then-Treasurer Gladys Berejiklian put a controversial funding proposal back on the government agenda after her then-boyfriend Daryl Maguire “fired up” about its removal.

Nigel Blunden, an ex-adviser to former Premier Mike Baird on Wednesday said he was frustrated about the handling of a multi-million grant to Mr Maguire’s Wagga Wagga electorate when he wrote a memo saying the project “goes against all the principles of sound economic management”. 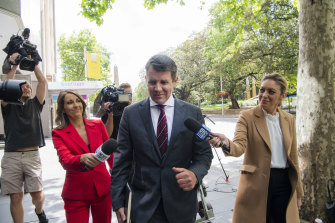 “Daryl fired up and Gladys put it back on [the agenda],” Mr Blunden wrote in the memo to Mr Baird on December 12, 2016, two days before the proposal would go before cabinet.

“No doubt they have done a sweetheart deal with Daryl”.

In a nod to Tom Cruise’s character in the 1983 film Risky Business, Mr Blunden also wrote: “As Joel Goodson would say, sometimes you have to say WTF”.

Mr Blunden gave evidence on Wednesday at the Independent Commission Against Corruption’s inquiry examining whether Ms Berejiklian breached the public trust or encouraged corrupt conduct during her relationship with Mr Maguire. 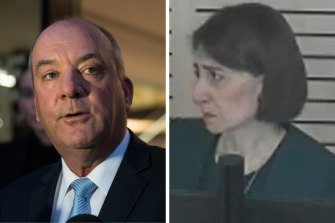 The ICAC inquiry has heard then-Treasurer Gladys Berejiklian put a controversial funding proposal back on the government agenda.Credit:Composite

The former premier is yet to give evidence but has vehemently denied any allegations of wrongdoing.

At the centre of the corruption inquiry is $35.5 million in grants, including $5.5 million issued to the Australian Clay Target Association in Wagga Wagga after persistent lobbying by Mr Maguire.

Mr Blunden told the commission he recalled a sense of frustration that procedures like feasibility studies and business cases were not followed relating to the gun club grant and yet, the project proposal seemed to “keep coming up.”

He said he gave “forthright, robust” advice to Mr Baird at the time that there was an “inept and inadequate business case” for the project, which needed to be further developed before it came before cabinet.

In his December 12 memo, he also quipped the gun club was to be known as the “Maguire International Shooting Centre of Excellence”.

“I have a way of speaking to those who know me and I wrote things in a manner that I think my boss at the time understood,” Mr Blunden told the ICAC.

He said he first recalled Mr Maguire approaching him in the halls of Parliament towards the end of 2016 to discuss an opportunity for an international shooting event in the MPs Wagga Wagga electorate.

“Part of that would be an opportunity to look at upgrading or spending additional funds on the existing facility there,” he said.

Mr Blunden also recalled correspondence between the office of the then-minister for Sport and then-treasurer Gladys Berejiklian’s office about a proposal for the funding.

The ICAC has heard evidence from three current and former bureaucrats this week who said they harboured concerns about the urgency with which the funding proposal was being pushed at the end of 2016.

“My overwhelming concern was about the urgency of this, and I was troubled by the absence of [scrutiny],” he told the ICAC.

“It was just a case of, is it really the most appropriate expenditure of five and a half million dollars of taxpayers money?”

have, say, Sometimes, to, wtf, you
You may also like: