Southern Australian sharks and rays being ‘cornered’ by climate change

A study aimed at identifying the risks to some 132 different species found in waters ranging from south-west Western Australia to NSW has been published in the Fish and Fisheries journal. It seeks to give authorities a method to prepare for the threats of overfishing and climate change. 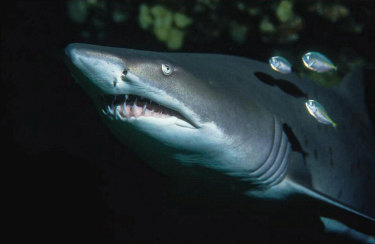 A grey nurse shark, one of the shark species in Australian waters that is already endangered before the impacts of climate change take effect.Credit: Erik Schlögl

“This is the first time we’re actually bringing them together as a risk assessment,” said Terence Walker, a research fellow at both Melbourne and Monash universities and lead author of the paper. “The challenges for fisheries managers are growing all the time.”

While tighter controls on commercial fishing since the early 2000s had arrested the decline of many shark, ray and chimaera species such as elephant fish, those gains could be eroded as more tropical species such as tiger and bull sharks extend their ranges southwards, the researchers said.

The East Australian Current, which shifts tropical water southwards, is strengthening and making the Tasman Sea one of the world’s warming hot spots as sea-surface temperatures rise at about four times the global rate. The Leeuwin Current, which flows south along the WA coast, is also strengthening although not as rapidly as its eastern counterpart.

“Global warming is literally going to push southern sharks and rays into a corner, because they can only go so far south and west,” said Leonardo Guida, a shark scientist with the Australian Marine Conservation Society and a co-author of the paper. “Everything points to an urgent need to rapidly adjust how fisheries work.”

The paper also found that at present fishing levels, as many as six species already assessed as endangered including the school shark and maugean skate will have their recovery hampered by southward-migrating rivals. 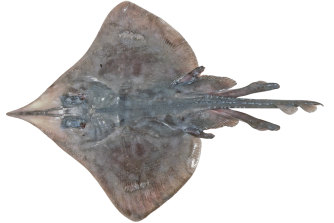 The endangered Maugean Skate which has an extremely narrow distribution. It is closely related to a Gondwana ancestor which lived off southern Australia some 80 million years ago. Credit:CSIRO

Richard Reina, a marine ecologist at Monash University and another of the paper’s authors said southern Australian waters were changing faster than other parts of the country and it was also the most heavily fished by commercial firms.

While fisheries had made major efforts to monitor fish stocks and modify approved take accordingly, they were already struggling to adjust to “the southward movement of so many species … everybody’s moving south”, Professor Reina said. 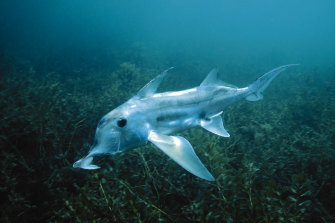 An elephant fish in Victoria’s Westernport Bay. The animal is among those at risk as waters warm and northern species move in.Credit:Kelvin Aitken

Those sharks and rays that breed or feed in shallow waters “will struggle to establish themselves if they get pushed off the [continental] shelf into deeper waters”, he said.

Dr Guida said it was vital Australia and other nations cut greenhouse gas emissions that was driving the hotter climate. In the meantime, fisheries managers should start to use the new methods to assess risk.

In some cases, that will involve increasing the areas where fishing is restricted or banned to give the at-risk species a chance of survival.

Many sharks in particular sit at the top of the food chains, keeping ocean ecosystems stable.

“If you look after sharks and rays, you’re looking after our broader food chains,” Dr Guida said. “It affects what fish ends up on your table – if it gets there at all.” 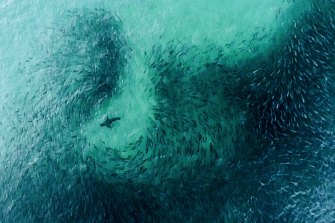