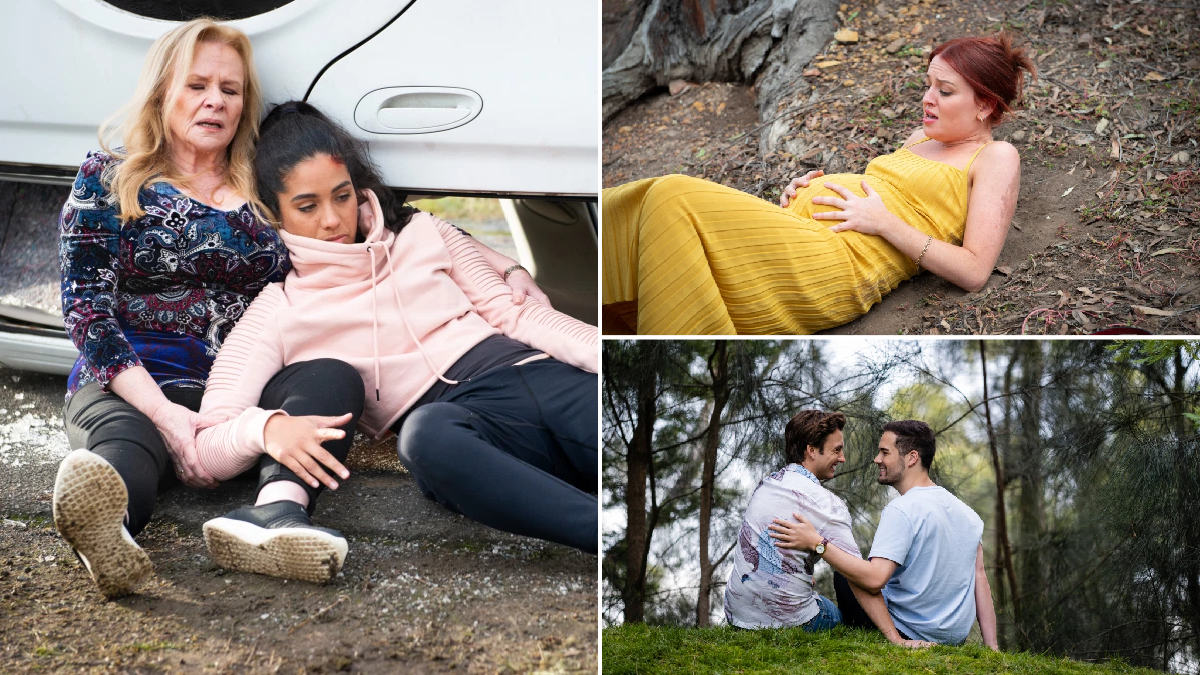 Two lives are left dangling this week – there are fears for Nicolette’s (Charlotte Chimes) baby after a vineyard trip gone wrong, and Yashvi (Olivia Junkeer) is literally left dangling by her seatbelt when a high-speed chase ends in tragedy in Neighbours.

But who will make it through to next week’s spoilers?

Things escalate with the Yashvi/Levi/attackers saga resulting in her and Levi going on a mad dash after the crooks. But all it takes is one second of Levi taking his eye off the road and the next thing they know, the car is sent into a mid-air spin, crash landing on its roof. Which of them comes off worse?

Nicolette suffers a nasty fall while visiting Chloe at the vineyard, but with no one aware of her location or just how much danger she’s in, will it take too long to find her to save the baby?

Elsewhere, that weird sensation that something was off with Jesse and that no one could put their finger on? Roxy puts her finger on it. His lies are uncovered – what will it mean for Harlow and Lassiters?

Here’s what’s ahead on Neighbours next week.

Nicolette is called to the vineyard by Hendrix, who is convinced something is going on with Chloe and Leo. Chloe and Nic end up spending a bit of time together, but when Chloe is called back to an unexpected meeting by Leo, Nic is left to explore the vineyard alone. As she wanders amongst the vines she suddenly realises she is lost. Disaster strikes when she starts to panic and becomes disoriented, and in her confusion she suffers a painful fall onto her belly. She’s badly injured and knows her baby is in serious danger, but no one knows where she is. While Nicolette is left on the ground clutching her stomach in pain, Chloe is with Leo and having doubts about their relationship. She even starts to question whether she wants to be with Nic at all. Leo picks up on this and jumps on her doubts, trying to get inside her head. Will he succeed? Aaron and David start to fret after being unable to get hold of Nic. When a search is finally mounted, what will they find?

Mitch approaches Yashvi and Levi with a deal – he will give up Nelson for immunity. It sounds too good to be true and that’s because it is; they follow him to the warehouse to question him further and make a shocking discovery. This kicks off a high-speed chase which sees driver Levi taking risks. And in one moment of loss of concentration, he suddenly finds himself careering head on into another car. He frantically spins the wheel, sending their car flying. Yashvi takes the brunt of it and has to be pulled from the wreckage, where she is fading fast. She’s rushed to hospital, but can she be saved?

Dipi flies back from Sydney to be with her daughter, afraid for her daughter’s life. Is this the big goodbye to Yashvi?

Who is this shady Jesse character? He certainly isn’t all he’s cracked up to be, and Roxy is about to discover the truth. Roxy is shocked when Lassiters short film festival to rival hotel chain The Quill Group. But things get curiouser and curiouser when a disgruntled Paul, Terese and Roxy learn the Quill’s pitch was identical to theirs. How could this be? Oh wait, that Jesse guy they all think is so sound is not only a liar – Roxy catches him snogging Curtis – but may well be behind the leak of the Lassiters pitch. Paul is not going to be pleased on either count.

Sheila tries to take on Mitch and Nelson

Sheila is one feisty gran and despite already having a run in with Mitch and Nelson, she’s ready to fight tooth and nail for her grandsons. Following the devastating car crash the attackers are arrested, but it doesn’t help with Levi’s mood. She decides to take matters into her own hands and comes clean about Levi’s childhood attack to the police. She hopes it’ll give Levi some closure, but will it?

Amy moves on from Ned

Amy is struggling with her crush on Ned so she brings out the big guns and arranges a blind date for him. Sadly for her, it backfires as she realises she really does fancy him. So, in true Amy style, she decides to sabotage the date she set up. Realising she needs to come clean, she tells Ned she’s enjoying their little bit of fun and doesn’t actually want it to end, and to her surprise he’s interested – until he hears Yashvi has had a nasty accident. Are his feelings for her gone? Amy starts to think it’s best she and Ned just give things a miss, but what does he think about that?

After the close call with Nicolette and the baby, Chloe realises she needs to step up. She throws herself into her relationship, determined to make it work, but all the while Leo is trying to entangle himself in Chloe’s personal life ready to make his feelings known. Well aware of what Leo is up to, Hendrix warns him off, but his act of heroism comes back to bite him in the backside.

Nicolette, meanwhile, is desperate to get away from all the overbearing concern following her fall and the final straw for her is when the dads-to-be try to force her into starting maternity leave. How will she react?