Surrounded by his family, including Carl Philip’s sisters heir-to-the-throne Crown Princess Victoria and Princess Madeleine, the little one was christened at Drottningholm Palace Chapel, just outside Stockholm. 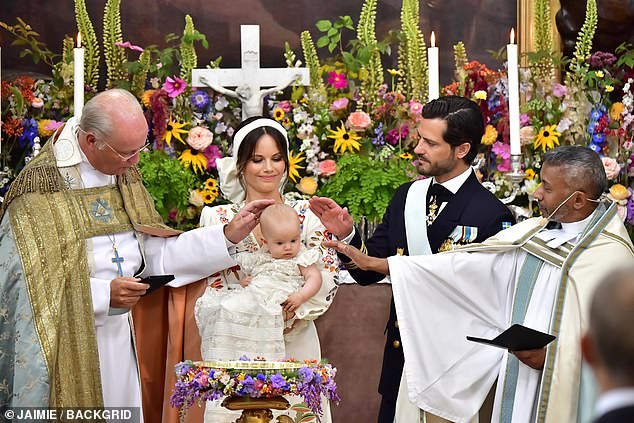 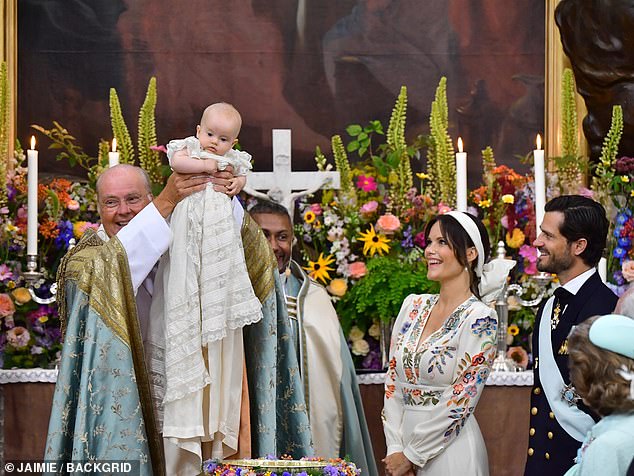 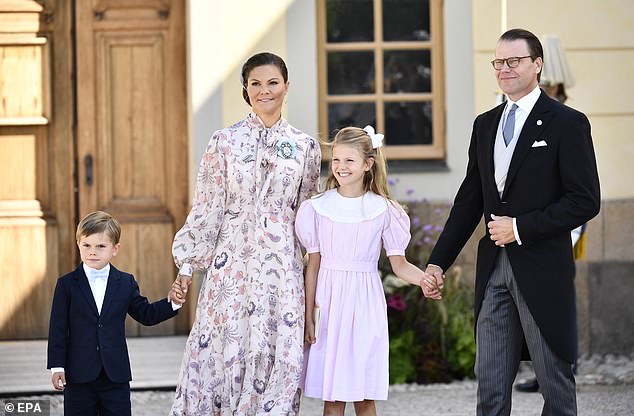 Surrounded by his family, including Carl Philip’s sisters heir-to-the-throne Crown Princess Victoria (pictured with her family) and Princess Madeleine, the little one was christened at Drottningholm Palace Chapel, just outside Stockholm 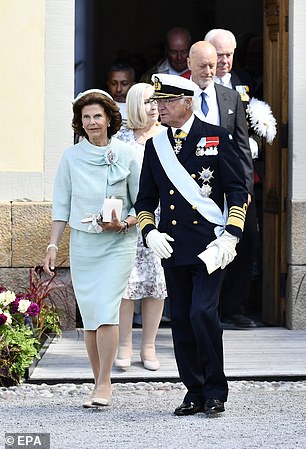 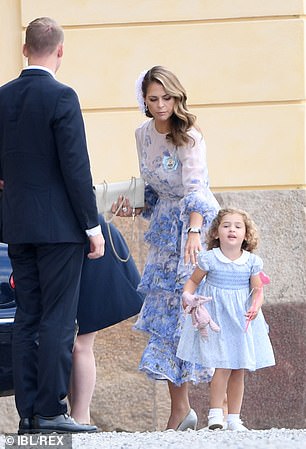 Prince Julian was dressed in the christening gown worn by his father to his own baptism in 1979, with the family heirloom dating back to Prince Gustaf Adolf’s christening in 1906.

It’s been worn by royal babies ever since, and features elegant lace detailing and ruffled sleeves.

Doting mother Princess Sofia, who held her baby during the ceremony, looked the epitome of glamour in a floral V-neck long puff-sleeve maxi dress by Italian fashion house Etro.

Her husband appeared charming in his military uniform. The parents-of-three were also joined at the christening by their eldest sons Prince Alexander and Prince Gabriel.

They looked adorable in matching navy shorts, white shirts and cream blazers while sitting at the front of the chapel. 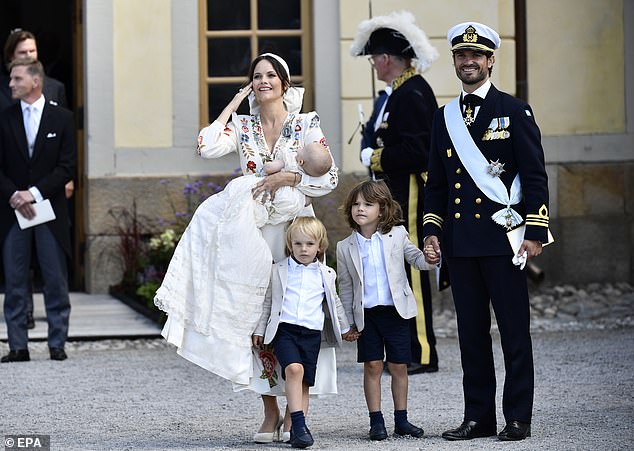 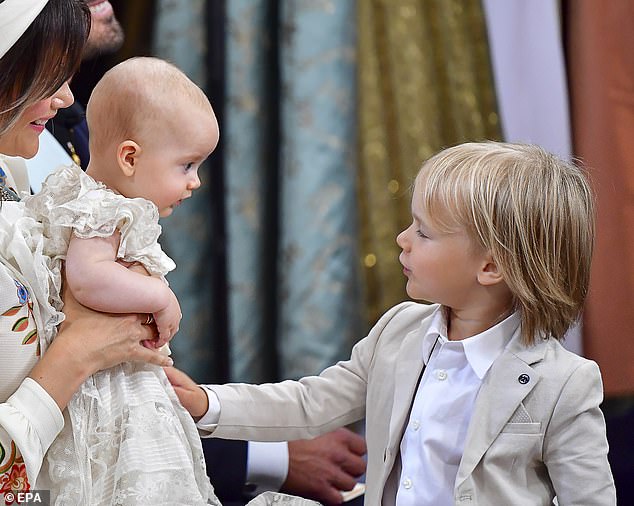 Prince Gabriel looks at his little brother Prince Julian, who is held in his mother’s arms, during the ceremony 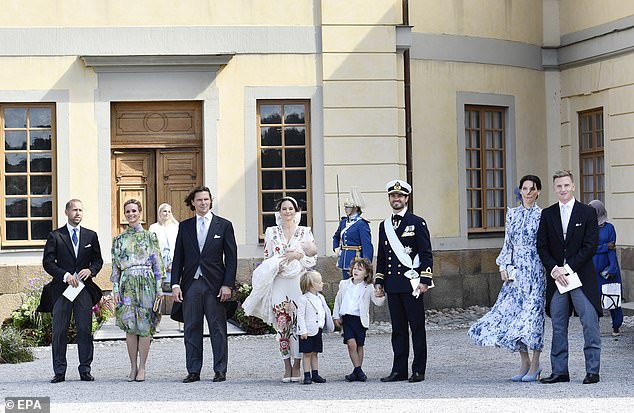 Among the guests were Carl Philip’s parents, King Carl XVI Gustaf and Queen Silvia, and his siblings and their spouses; Crown Princess Victoria and Prince Daniel, Princess Madeleine and Christopher O’Neill.

Prince Julian’s grandfather King Carl Gustaf revealed his name and dukedom at a cabinet meeting at the Royal Palace in Stockholm days after his birth, both of which are touching tributes to royal family members.

Prince Julian is the Duke of Halland, the former duchy of King Carl’s beloved uncle Prince Bertil, whose former home Carl and Sofia currently live in with their children. 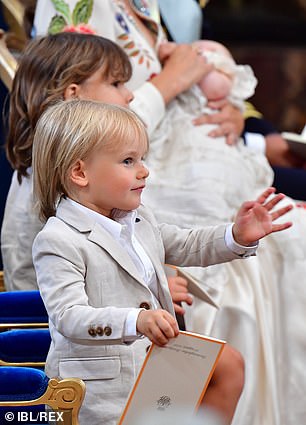 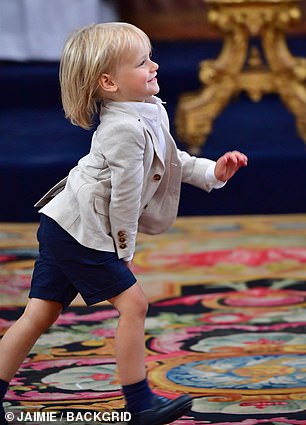 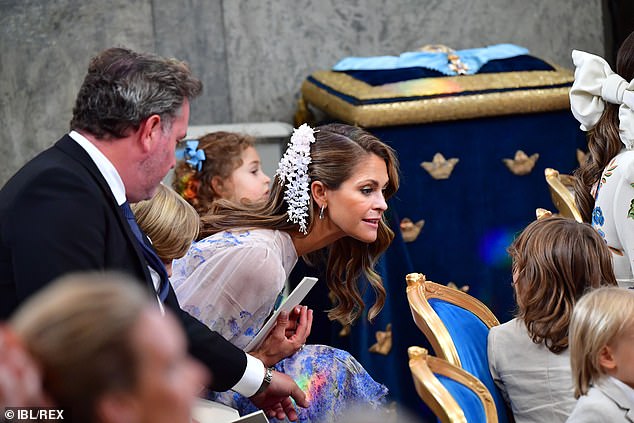 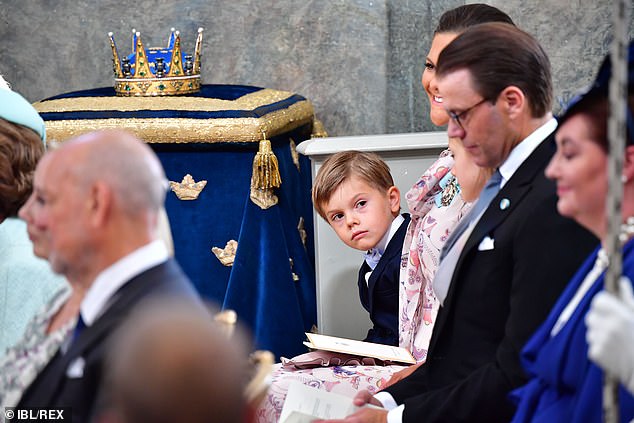 Prince Oscar, Duke of Skåne, is pictured next to his mother Princess Victoria and his father Prince Daniel 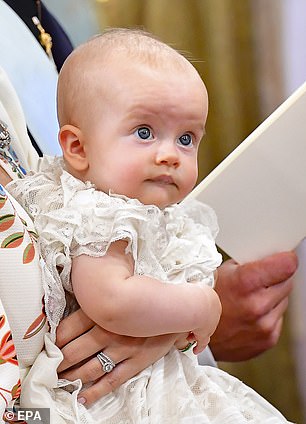 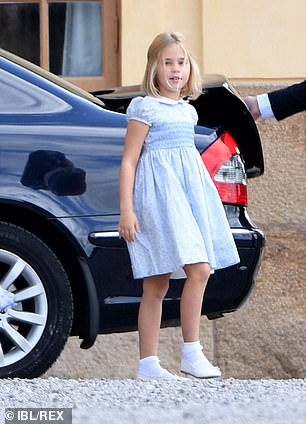 Meanwhile, Folke is one of the King’s middle names and was the name of the grandson of King Oscar II, who negotiated the release of around 31,000 prisoners from German concentration camps during the Second World War.

Unlike his older brothers, Prince Julian will not receive Royal Highness status after King Gustaf revoked the HRH style from the children of Sofia and Carl in October 2019.

While the children lost their positions in the Royal House and won’t be expected to carry out senior royal duties, they will remain in the line of succession. 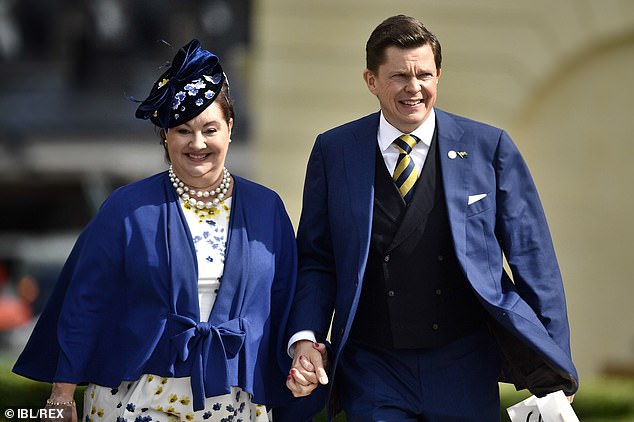 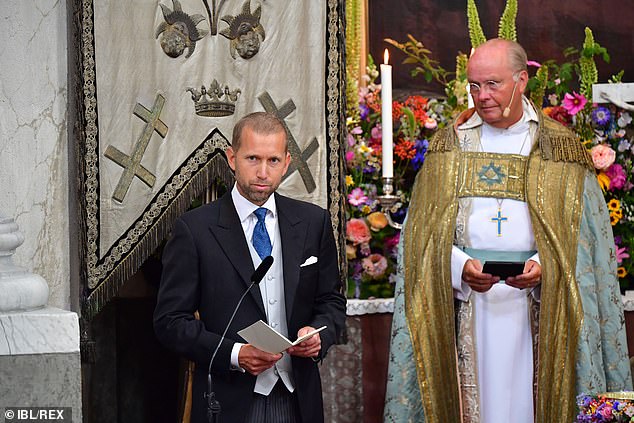 Godfather Jacob Hogfeldt reads, while pictured to his right is bishop Johan Dalman during the ceremony 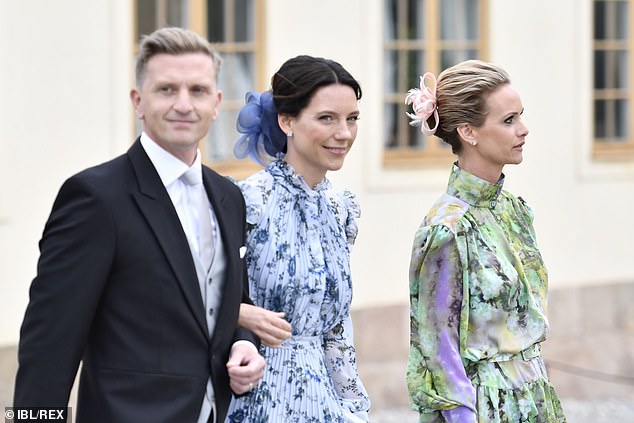 His older sister Princess Victoria, 43, is the heir to the Swedish throne and he is currently fifth in the line of succession.

Last month, the members of Sweden’s Royal Family were all finally reunited ‘after a long time in different places’ due to the coronavirus pandemic.

King Carl XVI Gustaf, 75, and Queen Silvia, 77, were joined by their three children and their spouses, as well as their eight grandchildren and pet dogs at Solliden Palace on Öland island, off the southeast coast of Sweden.

A sweet picture of the reunion, taken that month, was shared to the Swedish Royal Family’s Instagram account, alongside the caption: ‘Together on Öland again! A long-awaited reunion for the King.

‘The family, which after a long time in different places, can now once again gather on the “island of the sun and the winds”. A continued happy summer is wished to all.’ 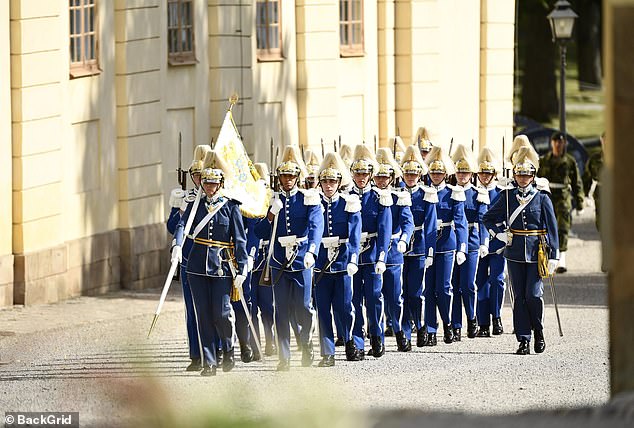 The Royal Guards before the occasion at the Drottningholm Palace Chapel, near Stockholm 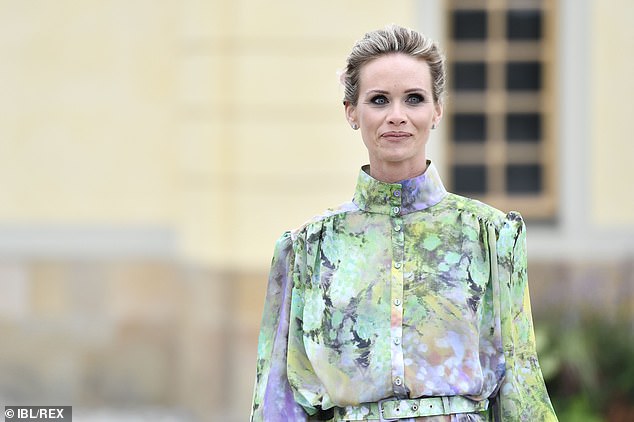 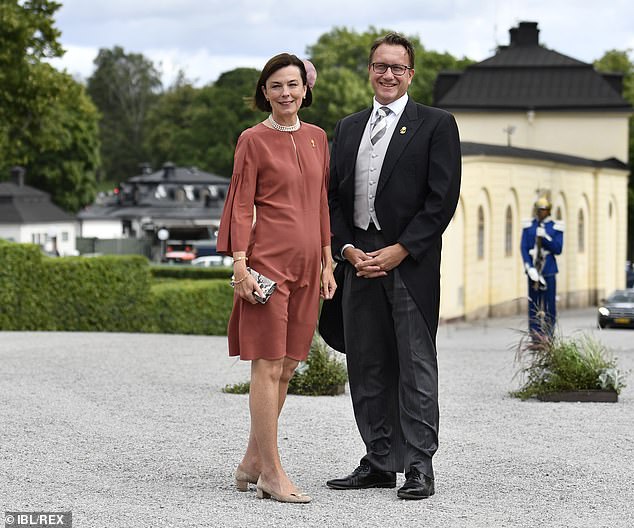 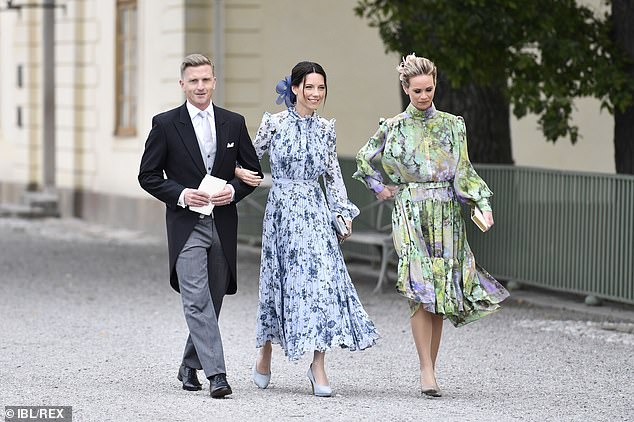 Dressed in an elegant ruffled white frock, Princess Victoria, 44, beamed as she stood next to her sister-in-law Princess Sofia, who looked equally stylish in a floral maxi dress.

The family’s newest addition, Prince Julian sat contently in his mother Princess Sofia’s arms, while her husband Prince Carl Philip proudly stood behind his wife and next to his second son, Prince Gabriel, three. 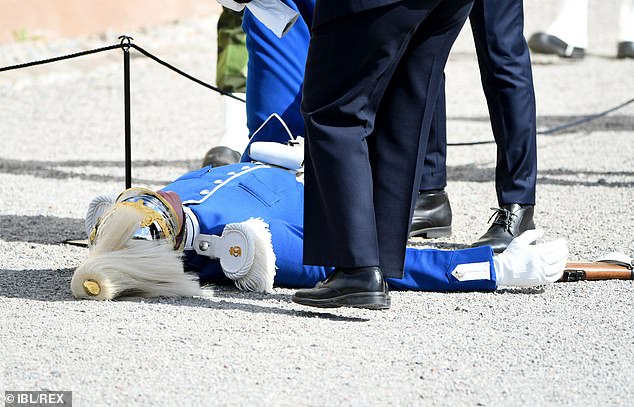 Princess Madeleine and her husband, Christopher O’Neill, who are based in the US, were pictured on the right-hand side of the photograph, alongside their son Prince Nicolas.

The family-of-five returned to Sweden last month to spend part of their summer with their relatives.

Princess Victoria’s husband Prince Daniel was placed behind the King and Queen, while the monarchs’ granddaughter Princess Estelle, nine, sat on a bale of hay with her cousin and Princess Sofia’s eldest son, five-year-old Prince Alexander.

Princess Estelle, who sported a light blue dress and a white bow in her hair, is the eldest daughter of Princess Victoria and Prince Daniel.

gather, P, royals, See, Swedish, to
You may also like: