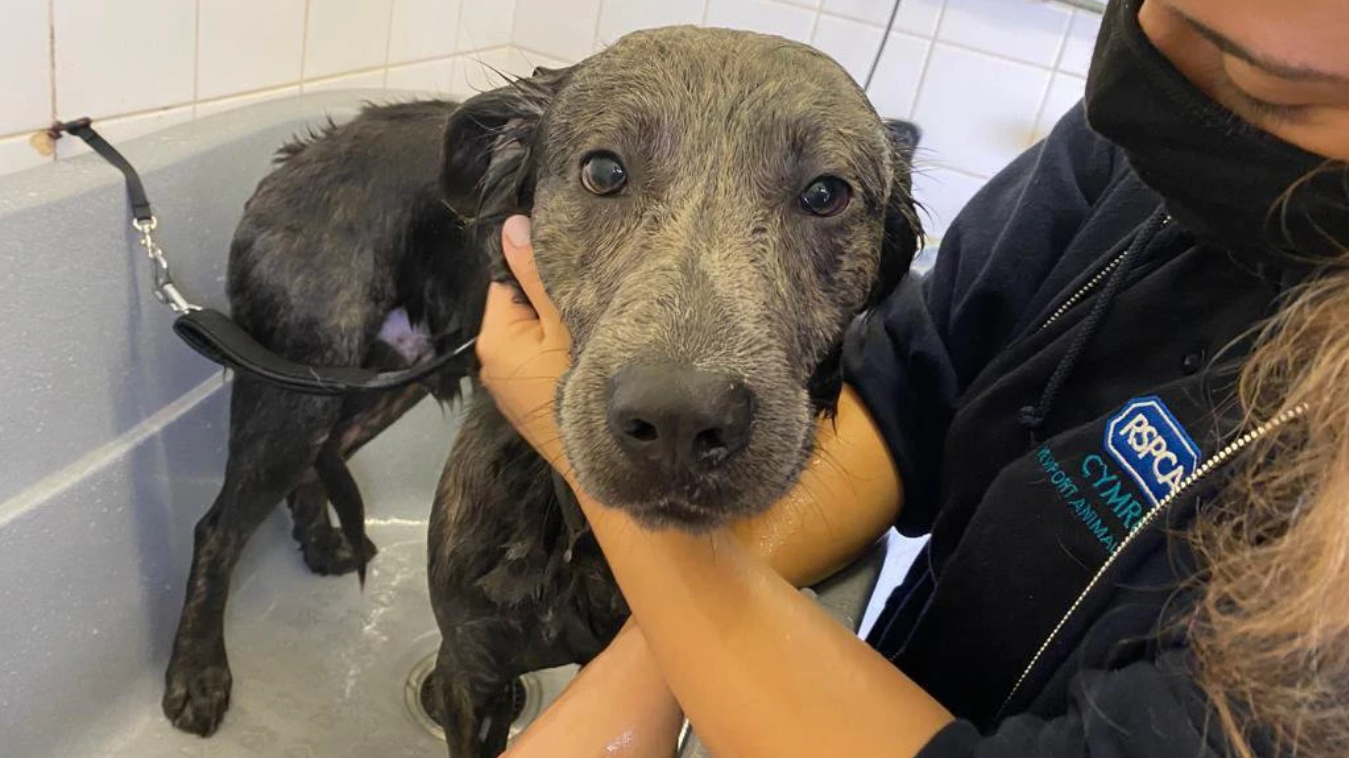 Sweet cross-breed Charlie has finally found a home after almost two years with the RSPCA – and just in time for Christmas.

The six-year-old pooch was rescued from a dilapidated Welsh barn, and was so nervous that he wouldn’t leave his kennel for weeks after he was found.

The sheer number of animals on the property meant the owner was struggling to meet the basic needs of the dogs – with a lack of shelter, parasite control and poor diet all being issues that had to be urgently sorted.

In total, the charity rescued all 45 canines from the property in West Wales after the owner agreed to work with the organisation to help the animals.

Of the dogs living in the barn with Charlie, he was the only one of them who took so long to find a new home.

Staff at RSPCA’s Newport Animal Centre say they are ‘over the moon’ that their formerly longest-stay dog has been able to spend the holidays in a loving forever home.

His new owner, Bethan Davies, from Brecon, made numerous trips to the rehoming centre to build up a bond with Charlie.

He also went for ‘days out’ at her house so that he could become gradually familiar with the new environment.

Three months on, and Charlie’s loving life in his new home with his new siblings; a collie called Lily and basset hound named Del.

Bethan said: ‘I’m really proud of the progress Charlie’s made; he’s a different dog to the one that came home with us initially.

‘There’s still a long way to go, but he’s a much more confident lad now. He’s made lots of doggy friends and is becoming happier and more at ease when meeting new people.

‘When he was first settling in, he didn’t want to leave my side, but I’ve noticed he’s becoming more confident spending time in different areas of the house without me and doesn’t feel the need to follow me around everywhere anymore.

‘It’s been hard work at times, and there have been a few little wobbles along the way, but I’m so proud of what he’s achieved so far.’

When Charlie first arrived at the Newport branch of the charity, back in January 2021, the poor guy was so nervous and withdrawn that he didn’t move from the corner of his kennel for nearly six weeks.

Even as he slowly started opening up to his carers, and placing his chin on their hands, it still wasn’t until the following May that he was confident enough to take his first steps outside.

Hayley Moorey, the centre’s behaviour and welfare advisor, said: ‘Like the rest of the dogs in the barn, he’d experienced very little human contact; he’d never gone outside, worn a collar or been on a walk, so his transformation has been quite incredible.

‘Because of his background, he understandably needed a specific type of home, somewhere fairly rural and quiet with a large secure garden where he could get used to different noises slowly and do things at his own pace.

‘His sociable nature also meant we were ideally looking for someone who had other dogs who Charlie could learn and gain confidence from.

‘We knew that finding a home that met all of these requirements might take some time, but we sensed that Charlie wanted more from life and we were determined to do everything we could to give him the happy ending he deserved.’

Something he’s most certainly found with his new owner Bethan.

The RSPCA team have praised Bethan for not giving up on Charlie.

Hailey added: ‘Everyone here is incredibly grateful to Bethan for her patience and perseverance.

‘Not many people would have travelled to an animal centre as many times as she did to get to know a dog, but she was committed to Charlie right from the beginning. She’s taken things very slowly and we are over the moon at how he’s settled in with his new family.

‘It’s been a very long journey for him, but we’re hugely relieved that he’s found a wonderful home where he can thrive and flourish – it makes all our hard work with dogs like Charlie worthwhile.’