Tamra Judge pokes fun at her ‘RHOC’ firing on TikTok

Former “Real Housewives of Orange County” star Tamra Judge, 53, gave fans a peek at the results of her implant removal with a topless photo of herself on her Instagram Story on Thursday.

She cheekily placed two large stars over her chest as she stood clad only in a pair of red sweatpants, with Capital King’s “I Feel So Alive” soundtracking the revealing pic.

Earlier this month, Judge revealed she was having explant surgery to help alleviate the autoimmune issues she claims the implants caused.

“Tired of being tired and inflamed,” she said in her Instagram Story at the time, adding that she had been suffering from thyroid issues, swollen joints and fatigue — as well as bladder, sinus and gut inflammation.

Mom of four Judge told People in 2015 that she had gotten work done on her breasts five times over the course of her life, beginning in her early 20s. This is the second time she’s had implants removed, and she shared Tuesday that she was already seeing “health improvements.” 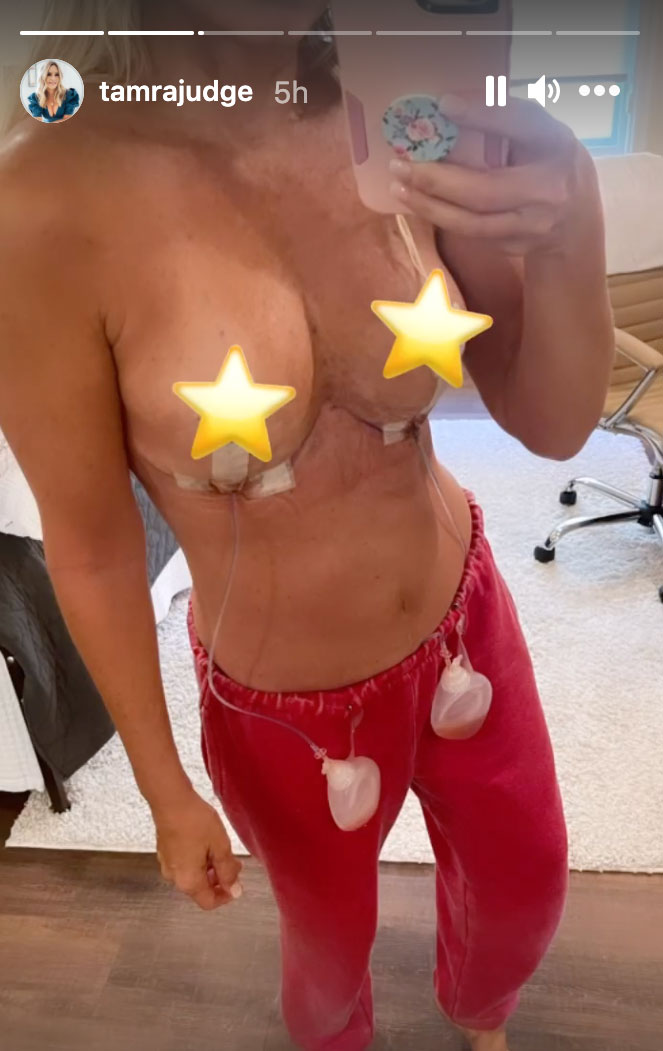 “I’m pretty sure Not working out will be the hardest part for me,” she captioned a post on Instagram. “I know it sounds crazy but I woke up today with rosy cheeks, No sinus congestion and happy thoughts. I’m hoping I will continue to see health improvements as the weeks go on.”

On Wednesday, Judge updated her followers, stating in her Instagram Stories that she had a sore throat and that her stomach was “huge.” However, she added hopefully, “I think tomorrow I’m going to turn a corner.”

On Thursday, Judge also posted photos of bouquets of flowers friends sent her.

The reality star appeared on “RHOC” for 12 seasons.

I, judge, of, results, shows, Tamra
You may also like: